Oh, Craiglist, what a strange place you are. I’ve found plenty of interesting things on it — instruments, graphic cards, furniture, even roommates — but this is the Craiglist ad to rule them all: these guys are looking for a generic father figure.

The Spokane, Washington ad, which is now deleted, is both hilarious and genius. 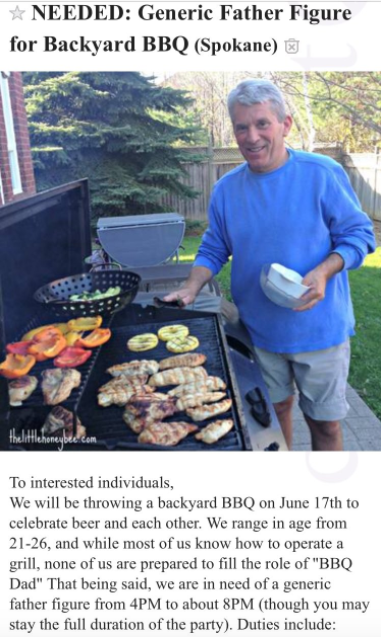 And apparently, the guys actually heard back from a few people, including one guy named Jerry who said they could call him “Dave” or “Bill” instead.

And of course, people on Twitter were loving it.

peak spokane & peak craigslist & peak dad twitter all at once

We may have even found a few good candidates.

This is like the dad bat signal. I wouldn't be surprised if every dad in America showed up

My dad would ace this… But his name is Clarence… and he lives in the UK. Not sure he's allowed to bring a griller on the plane.😂🍡🍢🍔🍖🍗

.@SWXLindsayJoy i texted this listing to my dad he's in. complete with dad jokes pic.twitter.com/CiHDDKSOxp

I mean, can you blame them? Sometimes all we need is a nice BBQ and some guy named Dave to crack open a cold one with.