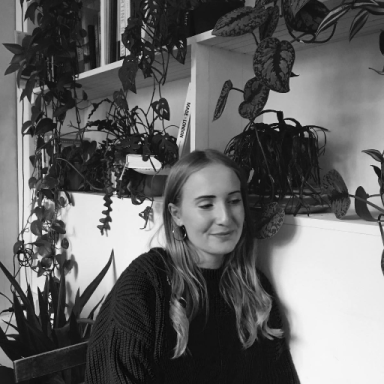 No-one on this show is boring. Period. Comedians Vic Reeves and Natasia Demetriou lead with charming cluelessness, garish outfits and dry humour that is always on cue. In one scene, when questioning who will remain in the competition, an actual Romaine lettuce dangles performatively from Natasia’s head, while in others, she uses bendy plant stems in place of a microphone. Gold.

As for the contestants, two names must be mentioned: ‘Henck and Yan’. Hailing from the Netherlands and Denmark respectively, this competitive pair bring a whole new meaning to eccentricity with their outlandish fashion and quirky jokes. Yan’s hair is dyed neon pink and green to resemble the inside of a watermelon, and at one point, Henck dresses up as a sailor for no reason at all. Their sculptures include a flying pig and a turtle made partly from shoes. Enough said.

Each week the contestants are challenged to create a magnificent sculpture based on a theme. From huge hairy beasts to sea creatures and green giants, there’s nothing adult about the themes chosen, which fills every episode with a child-like sense of fun.

Giant edible thrones is a particularly entertaining week. Designer Chanelle spends hours gluing leafy green kale and beans to cardboard while Jordan and Sarah from Maryland install their Hawaiian-themed throne with a ramshackle volcano that only just works.

The friendly rivalry between each team is enjoyable to watch and you can’t help but fall in love at a few moments in particular; The exchange of cheeky smiles between artists Ryan and Andrew and the adorable encouragement dad Ralph gives to his young son Jim when he starts to feel the heat.

If that wasn’t enough, halfway through the series teams are tasked with creating huge hanging mobiles and almost everyone rushes to help when Helen and Andi from Somerset begin to run out of time. Kind of odd for a competition but a charming display of solidarity, nonetheless.

The show’s silliness is balanced out with a subtle drive towards conservation. Contestants are encouraged to consider sustainability through the use of metal scraps and beach waste whilst thinking about how flowers can survive long enough to be viewed by the judges and how they might attract insects from the natural world.

Some teams opt to take this further by telling stories through their designs. Irish duo Declan and Eoghan highlight the forest fires in Brazil with their ombre flower mobile and Henck and Yan craft an orangutan that is so sad about his dwindling population it’ll really make you think.

If you’re a sucker for the English countryside, or just natural landscapes in general, you’ll love the lush rolling backdrops of The Big Flower Fight. Filmed over a sun-glazed summer in Kent, the teams create their fantastical beings in a futuristic white dome set amongst hypnotic wildflowers and meadows. Sold yet?

There’s something about making things that nourishes the soul, and this show provides all the inspiration you need to get started on your own at-home project. Although you’re unlikely to have access to the array of florals and plants on the show, the constant use of recycled objects is a reminder that just about anything can be turned into art if you think creatively enough. Now, get scavenging!

Apart from a few stress-induced tears, the series is pretty much positive from start to finish. There’s a lot of laughter as wacky ideas spring around the dome and you can really feel the bonds that the teams form as the weeks go on. Even when Yan tries to steal a mirror from Chanelle’s pile of materials, she shrieks: “I’m from South East London, you need to bring that back” at him in a way that, you know, comes from a place of love.

I am obsessed with visiting obscure places

10 Reasons Why Netflix Binges Are Actually Good For Your Relationship

7 Reasons Why Failure Is Actually Good For You