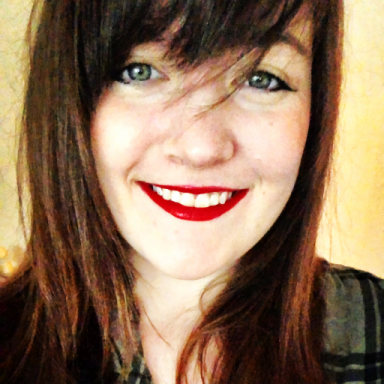 In 2013, I was desperately in love with my first serious boyfriend. I put him on a pedestal. He was my Prince Charming. He went the extra mile to make me feel special, even up until the end. He drew hearts in the foam in my coffee, he made me breakfast when I didn’t feel like getting out of bed, not to mention he was stunningly beautiful in my eyes. In the beginning, he never left my side, and I remember him doing sweet acts like bringing me coffee from my favorite local cafe to my job in the mornings to surprise me.

When we moved in together after six months, that’s when life started to go from fairy tale romance to harsh reality. He still tried so hard to make our relationship work and to show me he loved me. But as soon as we had to live in close quarters, share responsibilities like bills, chores, and cooking meals, and constantly be in each other’s space, my worst qualities would come out. We would fight, almost always instigated by my own irritability and insecurities, and I would push him away, but almost at once try and get him to forgive me. I remember a night when I demanded that he sleep on the couch and minutes later begged him to come back to the bedroom with me. There was so little room left for personal space. I had no sense of what healthy boundaries were. I hadn’t found my effective therapy yet, and that was the downfall of my first love. I think I will always have some regret for how that relationship played out and I will blame myself in some ways. Anything he did was not enough for me after a while. I wanted more from him, and couldn’t appreciate all that he gave me of himself. If I could tell him anything now, it would be that I’m sorry I mistreated him the way I did. It would be that I’m sorry I took his love for granted and pushed him to the point of needing to leave me for a healthier life.

We had made plans to go back and work at our summer jobs (where we met) in another city, and since I was in college and finishing up finals week, he left town the week before I did. I could tell during that week that something wasn’t right between us. I wasn’t hearing from him as often, he was acting differently, and sort of withdrawn and I got anxious. I started calling him often and asking him what was wrong, trying to force an answer out of him. He called me and broke up with me after days of being apart. I was devastated from the moment “we need to break up,” reached my ears.

I had to pack up our apartment and move out with the help of my dad and brother, fighting back my tears the whole time. I was fortunate enough to have supportive friends who helped me through my storm of emotions that week. I moved into the same house as my then ex-boyfriend days later and would have to endure an entire summer of living in the same house and watching him date other women. My own personal hell.

This breakup could best be described as a perpetual train wreck. I lived in a bedroom directly across the hall from the man who broke my heart for about a month into the summer, and before even a week had passed into the breakup, I heard rumors that he had moved onto dating someone else in the house of about 10 others. I didn’t know how to handle myself after a breakup, I didn’t know how to heal properly, and to accept the inevitability of pain after a breakup, let alone the obstacles I had to face that summer. I was promoted to assistant manager in the department where I worked and still had to see him at work and home. While I was adjusting to being single and having new responsibilities at work, I depended on alcohol to numb my emotions, which led to aggression, anger, and outbursts that affected everyone around me who cared. I embarrassed myself in every way imaginable, and I resorted to harassing, name-calling, and slandering. I came close to losing the best job I ever had, but I survived the summer and then moved back to my college town to move on with my life.

I never processed that breakup or the traumatizing summer that ensued, which resulted in future harm to myself. I landed in the hospital mental health unit in September of that year and started my first medical leave of absence from school. I had another relationship that same year that lasted four months and also ended in disaster. I threatened suicide after that breakup, lost most of the friends that I had in common with that person, and knew I needed to get help—it couldn’t wait. This breakup also landed me in a mental health unit for a week.

In 2018, I moved across the country, away from everything I had ever known and to an unfamiliar city to start fresh. I found a therapist who diagnosed me with Borderline Personality Disorder and launched me toward a path of self-discovery. I had been misdiagnosed for 26 years, but I felt like I now had some answers for the turmoil I had caused for myself over the years, and the difficulty I had experienced in relationships.

I started Dialectical Behavior Therapy the spring of 2018, and through group and individual therapy, I felt myself beginning to heal. In the same year that I started therapy, I began a new, serious relationship. Through that relationship, I was able to work on boundaries, effective communication, and interpersonal skills and truly felt myself growing. That relationship ended on my terms and was the first relationship that did not end with any negativity or hostility.

Since my last breakup, I’ve dealt with rejection, but I have the skills to process the feelings effectively, rather than to become self-destructive. I had my heart broken again not long ago. The difference from my first breakup seven years ago to now is that I understand that feelings are temporary, and they come and go like waves. The feeling is not going to be there all the time, but when it rises, you allow it to come and to pass. Mindfulness has been one of the most powerful DBT skills for me to date. The simple act of noticing and naming emotions can be the difference between self-preservation and self-destruction. DBT has also instilled interpersonal effectiveness in me. I am able to accept when a person tells me their truth, rather than ask for answers, beg for them to stay with me, or stoop to the level of lashing out at them. This one may sound like common sense to a lot of people, but for someone with BPD, the emotional intensity can become so severe that you are blinded by an emotional tidal wave and you’re willing to do anything that you think will make you feel better again.

Years ago, I thought I could beg for someone to love me and to forgive me for the way I had treated them, and that would erase the way I felt. The truth is, most of the time you need to accept the sometimes harsh reality that life hands you and allow yourself to move on. Radical acceptance says you don’t need to like what life is giving you, but you do need to accept it. While I have become much more effective in dealing with the intensity of my emotions, I still experience difficulty with them from time to time like anyone else. When my emotions become so intense that I feel like I can’t handle it, I can use a TIPP skill and change my body chemistry through submerging my face in ice water (Temperature), doing a high intensity workout (Intense Exercise), or practicing paced breathing (Paced Breathing) to bring myself back down to a normal level and then I can more effectively deal with what I’m feeling.

Seven years ago, I went through an emotionally traumatizing breakup. I will probably always look back and wish I could handle it differently, but I am grateful that it set me on a path toward understanding and healing. I am grateful for therapy for giving me a true chance at life, love and happiness—a future.

I am currently finding myself through mindfulness, movement and DBT.