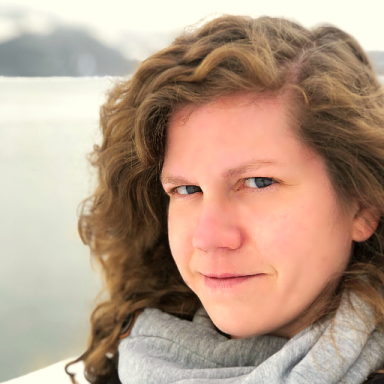 I was four years old when it all started. It was winter in my home state of Oregon, and we were in the midst of an epic ice storm. I had come down with the flu—or so it seemed to my parents.

The vomiting was out of control.

One vivid memory was rushing to the only bathroom in our small childhood home to release yet another round of bodily fluid. The door was locked. In a child’s panic, my hands flew to my face in a futile attempt to stop the dam that was my lips from bursting. As the floodgates opened, my father came out of the bathroom just in time to see vomit shoot in all directions around the chubby hands that were trying so desperately to keep it in.

There were other harder to explain symptoms as well. I still recall the way I felt so hot inside, and yet my mother insisted that I was cold to the touch. She was so concerned that she actually moved the worn out blue couch in our front room right in front of the fireplace, where I slept restlessly. I was in an incredible amount of pain and I felt eternally thirsty. My nails and lips were purple and I looked like I had two black eyes.

My siblings were concerned. I am the middle child of nine—six girls and three boys—and we grew up in a three bedroom house outside of Portland. My sister Holly was 11 at the time and was very into a series of books called The Babysitter’s Club. Written by Ann M. Martin in the ‘80s and ‘90s, it was a fictional series based around teenager’s babysitting experiences. Holly had just read one in particular about a child that gets diagnosed with Type 1 Diabetes, told from the perspective of the babysitter. Holly begged my mom to take me to the hospital and cited the symptoms from the book.

She saved my life that day.

I was in and out of consciousness on the way there. Because of the ice storm, the going was slow. Holly came with my mom and I in our huge 13-passenger van, and she held my head in her lap the whole way there. She even carried me into the ER.

Here’s where things get really hazy. I’ve asked for details and I still don’t remember it clearly. There were a lot of bright lights, and adult faces I did and did not recognize. All wore the same look of worry and urgency. As they wheeled me through the hospital halls on a gurney, I vomited on a nurse. I remember feeling very scared and confused. No one seemed to be able to explain to me what was happening, and I kept saying I hurt. It was true. I hurt all over. Still now, years later, this pain experience has become a baseline for all others.

There was an ambulance at one point. I later learned that they had transferred me to a children’s hospital downtown, where I was admitted into the ICU immediately.

My blood sugar levels upon intake were too high to register. I was soon diagnosed with Type 1 Diabetes.

Let’s pause for some doctor talk.

Type 1 Diabetes Mellitus (we’ll call it T1DM) occurs when the body’s immune system attacks and destroys the insulin-producing beta cells of the pancreas. Insulin is a hormone made by the pancreas that allows your body to use sugar, or glucose, from carbohydrates in the food that you eat for energy. Insulin keeps your blood sugar level from getting too high (hyperglycemia) or too low (hypoglycemia). Destroyed pancreatic cells cannot produce insulin, therefore a chronic condition is born. Because my pancreas is basically useless, I have to be my own pancreas. I inject myself with two types of insulin daily: one is a long-acting formula to keep me alive, and the other is a fast-acting formula that I take every time I eat.

Five to 10% of all diabetics in this country are Type 1. Different from its more common cousin, Type 2, where the body becomes resistant to insulin due to factors like poor diet and lack of exercise. Type 2 is also thought to be genetic to a certain degree, like Type 1.

Because my blood sugar at diagnosis was so high, I was suffering from diabetic ketoacidosis. Also referred to as DKA, it is a serious and even life-threatening complication of Type 1 Diabetes. DKA is rare in people with Type 2 Diabetes. DKA is caused when insulin levels are low and not enough glucose can get into the body’s cells. Without glucose for energy, the body starts to burn fat for energy, and this causes the blood to become more acidic. That’s where all my pain was coming from. Eventually I would have slipped into a coma and passed away.

I spent almost a month in the hospital after the formal diagnosis, seeing nutritionists and endocrinologists and therapists. I was four, you guys. I didn’t get it. All I knew is that shit was different, and that the needles scared me.

The nurses taught my parents how to keep all the supplies sterile, and how to not kill me with too much or too little of a dose. It’s crazy to think back on now.

It’s been almost 30 years since diagnosis, and I’ve made lifelong connections with people in the diabetes community. There are so many stories to share, both highs and lows, and it’s comforting to know you’re not alone.

Fast forward to a couple years ago, when I got a text from my sister. Holly’s four year old daughter, my niece, was in the hospital. She had just been diagnosed with Type 1 Diabetes.

I immediately called Holly, anticipating that she wouldn’t pick up. I sent her a text that was answered later that night. I could hear the strain in her written words and I could feel the tears behind the texts. She knew firsthand what her daughter was up against as she watched my struggles growing up. And Holly was also now responsible for all of the injections and sleepless nights and fighting with insurance companies—things that she wasn’t prepared for as a mother. No one can prepare you for something like that.

I would never wish diabetes on anyone, much less my sweet niece. But I am happy that she has a bad ass mom and an experienced auntie that will always be her biggest fans and supporters.

My sister saved my life when we were kids. And I like to think that in my own small way, I’ve been given an opportunity to save hers now. Any question she has, or any fears that arise, are just a text away. I am so happy that I can be a powerful resource for my sister and my niece. I never would have dreamt that it would come full circle the way it has, and I’m grateful I can help.

Keep up with Brittany on Instagram, Amazon and BrittanyJosie.com

9 True Stories About Encounters With Witchcraft, Voodoo And The Occult

20 Important Things Every Diabetic Should Know About Pregnancy