Recently I saw your tweets making the rounds and the subsequent outcry on Twitter. 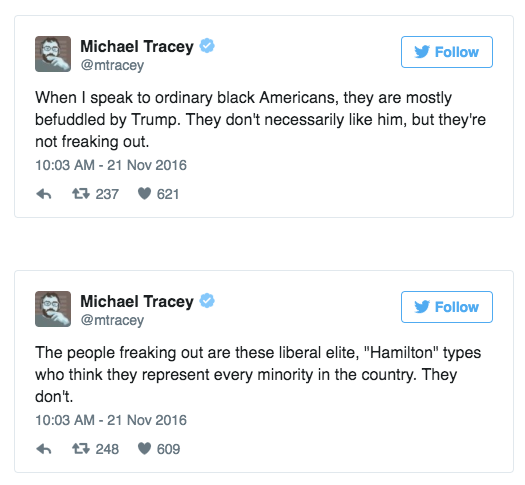 I can admit that I’m not above a social media pile on every now and then and I was all set to laugh about how silly this tweet is. I even typed out a snarky joke, a good one!

In this divisive climate, I’ve been trying to practice taking a moment before I put an idea out into the world. I paused and asked myself if another joke at your expense would actually be contributing something meaningful to this conversation or if it would just be more noise.

That’s why I deleted my joke tweet and tweeted this instead:

But Michael, you haven’t done better and your piece is proof of that.

You’ve completely misunderstood, or worse, purposefully misrepresented the reason Black people on twitter are annoyed with you.

In your subsequent Medium piece, you say that “woke” Black folks are:

Let’s look at what you actually said about Black folks yesterday. You wrote that “ordinary Blacks” aren’t freaking out about Trump. When pressed by Vann R. Newkirk II on what this means exactly, you clarified:

Your comment was some grade-A certified “poor choice of words” on your part and people are 100% correct to point that out. Only that isn’t all they are saying, but for some reason, that’s all you’re hearing.

You’ve split Blacks into two categories: “ordinary Blacks” and what you call the liberal elite “Hamilton types” of Black people. When you say “ordinary” do you mean all working class Black people? Older Black people? Black people who grew up in the hood? Black people who don’t have Twitter? I am still not even sure. It’s completely unclear and when pressed for clarification by actual Black people of all stripes, you just back peddled into a trope of downtrodden simple Black “hardworking American” that I can only assume you based from a Tyler Perry sitcom. I know on TV, Black people are quantified in binaries like good versus bad, flashy versus humble, and downtrodden/hardworking versus trivial/elitist, but there are nuances to Blackness in real life and your comments make it sound like you don’t understand this.

So you had a conversation with a Black woman you met on the street about her feelings on Trump — did you tell her to her face that you’d be telling your twitter followers that you designated her as a “Humble Black?” Probably not, right? Because that would be a weird thing for a white person to tell a Black person they’ve just met and don’t really know that much about. It’s weird because it’s based on your assumptions about our lives and our identity.

Designating yourself as the arbiter of what “type” of Black people we are and splitting us up into categories that you yourself determine makes it seem like you don’t see Black people for all the nuanced, and complexity we actually occupy. You’ll notice that this is more than using the “wrong lingo” and this is what people are calling you out for.

And how do I know you don’t see Black people and our identity as nuanced? First, it’s because you assume that if a Black person is on Twitter they are automatically some kind of fancy, monied, Black elite with Hamilton tickets who would never deign to listen to the “humble Blacks” like you so generously did. Are you aware that many of the Black writers, thinkers, creators that you dismissed as stuck in some wealthy Black people bubble are in fact very much struggling financially? Tweeting doesn’t pay the bills and Black folks are certainly capable of being working class while paying attention our political and media landscape. We are vast, we contain multitudes.

Now this assumption on its own is bad enough, but your second is truly egregious: When you suggest that “extraordinary Blacks” are living in a bubble and not listening to the concerns of the “Humble Blacks” you are assuming many of us are ignoring our own mothers, fathers, cousins, brothers, aunties, and uncles. You are accusing us of being totally removed from our own communities. You are saying that you are more in touch with our own families than we are. This assertion underscores how little you actually understand about Black people and Black identity because I guarantee even “woke” Black folks Twitter live this reality daily. We don’t have to go out onto the streets of New Orleans and strike up conversations with Black strangers like you did to understand this — we already understand it because it’s where a lot of us come from or a space we currently occupy. I happen to know some of the same folks you dismissed as out of touch elitist Black culture bubble dwellers yesterday were in fact tweeting at you from the “humble” homes of their “ordinary Black” parents with whom they live.

And that’s what I think was the worst part of your overall analysis yesterday. Your big reveal that in fact, “Humble Blacks” are not freaking out about Trump because they’ve built up what you called “depressive realism” as a way to navigate a political system that wasn’t set up for us and thus has marginalized us for decades. You presented this as your big take away from conversations with “Ordinary Blacks” that we affluent Hamilton types simply couldn’t see.

Only, that’s total bullshit because this is something that Blacks understand on an innate level and it is so obvious to us that acting like we need you to point it out to us is insulting. We see it in our communities every day. I see it in my auntie who stays home on election day not out of political apathy, but because she doesn’t feel that any candidate genuinely has her best interests at heart. Hell, this idea is what Kendrick Lamar raps about. It’s the entire subtext of the show Good Times. SO I ASSURE YOU BLACK PEOPLE OBVIOUSLY UNDERSTAND THIS VERY COMMON SENTIMENT AS IT HAS BEEN A MAJOR THEME OF BLACK EXPRESSION SINCE FOREVER AND WE REALLY DON’T NEED A WHITE PERSON TO EXPLAIN IT TO US.

And you know what? It’s okay for you to not necessarily know this as a white guy, like I said Blackness is complicated and there are a lot of nuances. But this is exactly why you need to understand how to be better. The same way I thought better of my joke tweet to you yesterday, before you start making big proclamations about Black people, ask yourself if you’re actually contributing something meaningful or substantial to the conversation. Because yesterday you tried to whitesplain something to Black folks that most of us spent our entire lives being personally familiar with and you did it while relying on really tired distinctions around Blackness that you yourself made up. This isn’t how you engage meaningfully around race issues at all. No one is forcing you to write about Black people, but if you’re going to do it you should do it well. I hope that you’ll take this criticism as a chance to think though your observations on race a little more because going into a Trump White House, I have a feeling we’re going to need bold voices who write about politics and race in meaningful and substantive ways.

To My Fellow Black Women Who Choose To Rebel: I See You And I Am You