As I repacked the loosening sides of the cardboard box I’ve placed my things in and out of over the past few weeks – in and out, again and again – the strangest fear came over me: that it wouldn’t all fit inside. I needed to take a photo for this article, so I pulled the frames down from the wall, re-stacked my clothes, packaged up my books and journals. It took about 5 minutes. It was a funny thought to have, because I spent those few weeks painstakingly selling and donating and driving cars full of things in bags and boxes to sorting and trash centers until almost nothing else was left. The idea to do this was singular, and burned a hole in my head until I finally did: to only own what was purposeful or meaningful, of use for my body or fuel for my mind.

Two weeks ago, I first folded the bottom of that box and placed it in the middle of my bedroom floor. I placed what I thought to be essential inside. 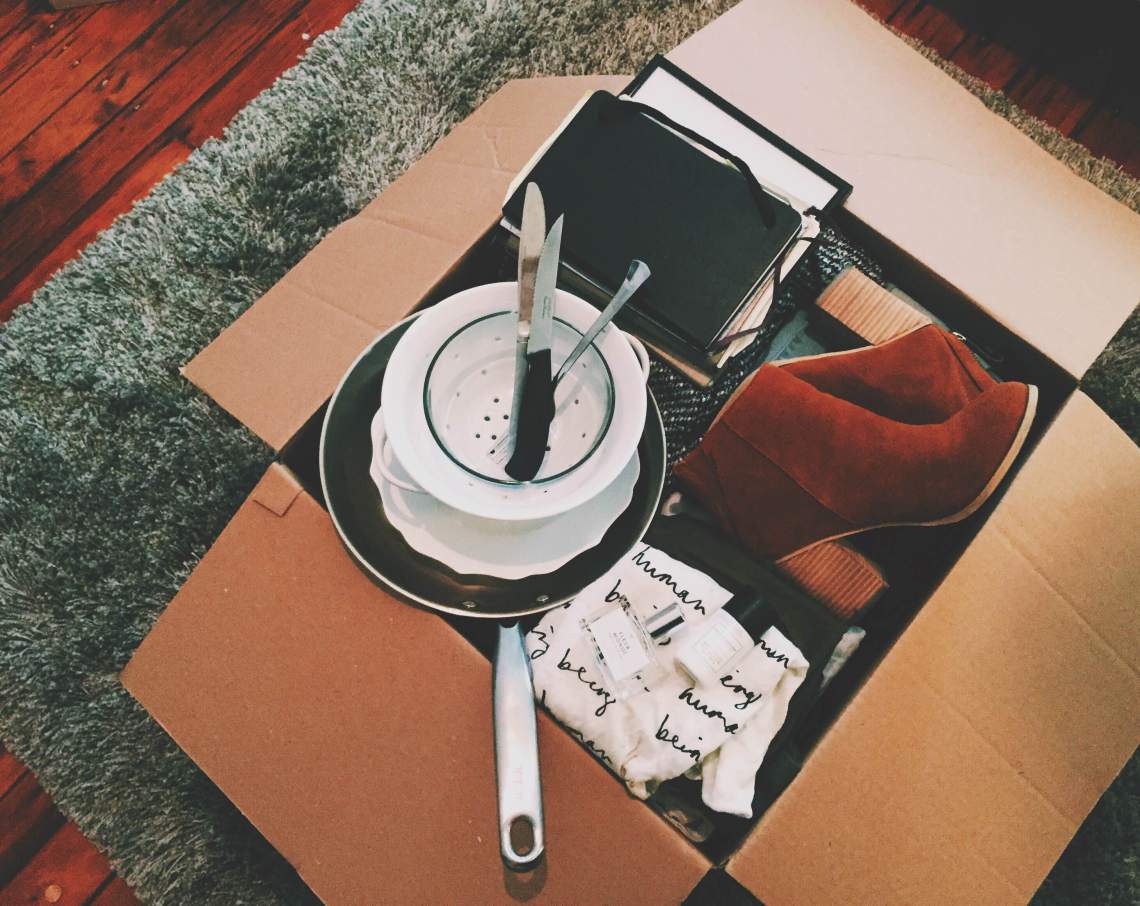 Then I got rid of everything else.

I have done many things in my life. All of which (even, and maybe especially, the most unsuspectingly destructive) were in an effort to heal, or be better in some intangible way. I have drugged and therapied and self-helped my way through many days, but nothing was ever revolutionary in the way I had hoped it would be, until this. This was the game-changer. This shifted almost every aspect of my life in some way, from the way I eat to who I love to how I spend to how I think.

The process of purging took weeks. I had piles half way up to the (objectively very high) ceilings in my apartment. I would be filing things to keep and sell and throw out and find myself, in the middle of placing a group of dresses on a box to sell, choking up, my gut blazing with anger over things that happened a decade ago. Things I thought were long dead and buried, all of a sudden, were resurfacing. It was as though all these little things were safeguards, feeling buffers, storage units for what I had decided they meant about me. All those things I didn’t really want or need I kept for how they made me feel: Better. Different. Safe.

It’s not about minimalism. I don’t live in a white-out cellblock hole. It isn’t, and was never, about living with “one box of things” just to say I do. (In fact that statement isn’t even true: I have things that were intentionally excluded from the box, furniture and what not, as they were necessary but so large that they would have defeated the purpose.) The unit of measurement – a box – was just a tool, a way to cap myself off. I don’t think you have to only have one box of things to have a grounded, intentional material existence. I do think you have to be your own gauge. Your truth gauge. The thing that emerges when you stop justifying your fear.

I own 25 pieces of clothing, not including shoes. I have exactly six books. I have a few journals from the past three years or so and a little box of office supplies. A binder of all the legal/financial documents that aren’t digital or stored in a separate location, a little box of keepsakes I couldn’t part with, like pictures and plane tickets and letters. 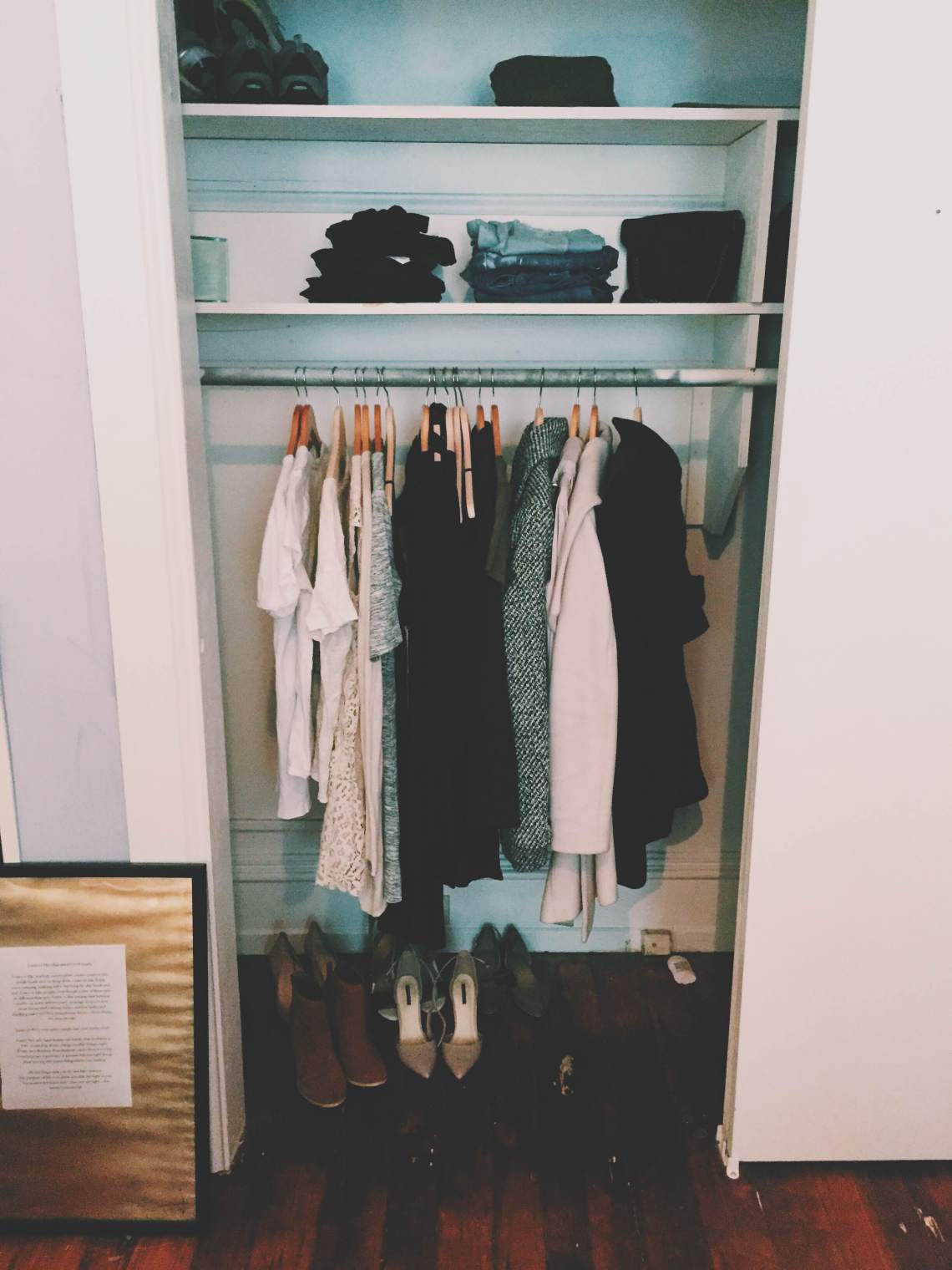 I have a daily cooking capsule: one plate, one fork, one knife, one cup, a pot and pan and cutting board, and a few other essentials. Every day, most of those things are used. They’re washed after every meal, and they return to their place, to be used again, a few hours later. I have a capsule of things stored away for when people come to stay – dishes for dinners, linens for weekends. 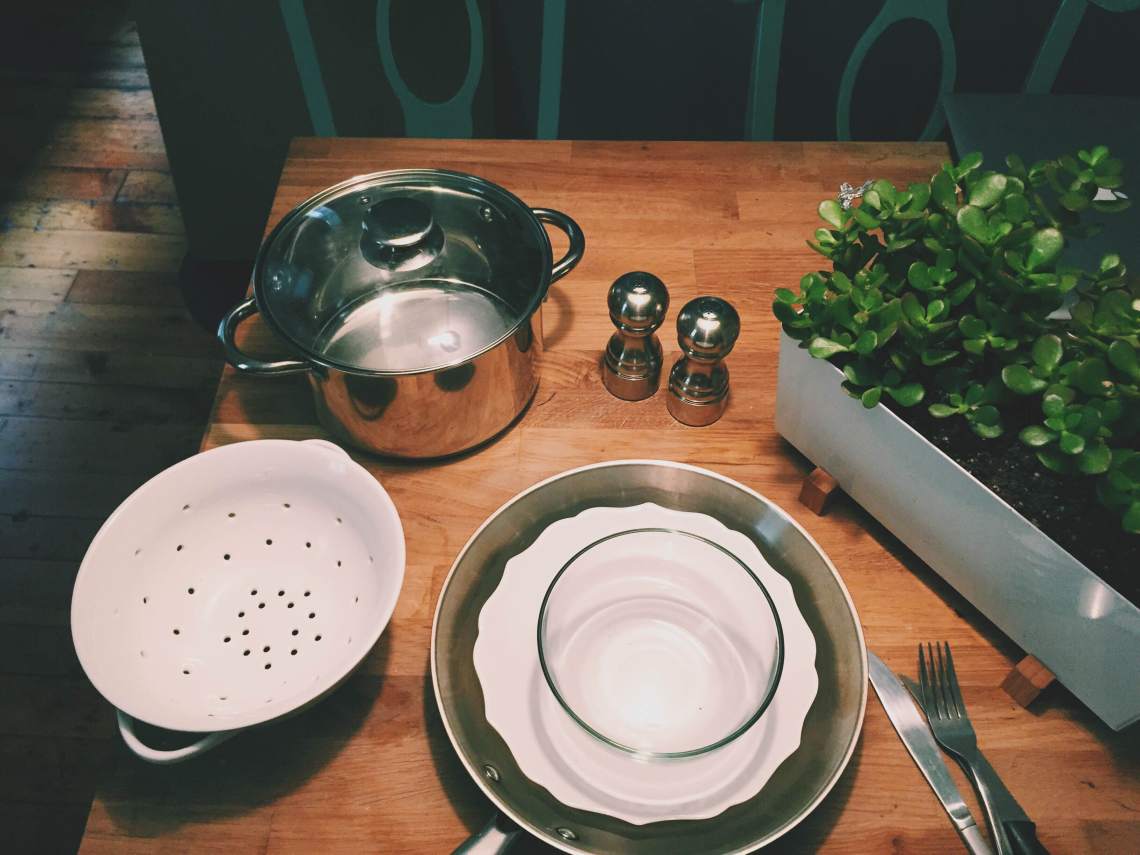 I have a bed and a set of white sheets and a big down comforter and a beautiful cool-toned wooden side table and a sitting/reading chair that’s perched by my window. I have lots of plants and a big cozy white couch. I have a travel bag and two candles and two black and white patterned throw pillows and a rack full of wine.

The funny thing is that I always considered myself a pretty minimalistic person. I’ve always packed lightly, knew I kept less than the average person did (affirmed for me twice-over by the happy moving services who had easy afternoons). Yet I would still roam around my apartment, weighed down by the hundred “just in case” things I never found a cause for, the things I kept for appearances, for ego, for the illusion of safety.

The thing about the things that are heavy is that you are the one who must lift. Nobody else will bear down and rise for you. The literal weight of the boxes of books and appliances and decorations I couldn’t carry in my arms made sense to me, I knew I couldn’t release them at once, and so I had to dismantle them, let them go piece by piece.

Things carry an energy, and mostly, it’s the energy of the meaning we’ve assigned to them. If you don’t believe me, step inside a dim, cluttered space. That “yuck” feeling you get? Yeah. That.

But things get that way because our “yuck” instincts are voided out by our screaming minds that tell us they’re necessary. We collect pseudo-useful shit because the brilliant minds that craft the advertising-industrial-consumerist-half-human complex need to build a need for things where there is none.

This feeds the fear pit we develop when we’re young, when we (often subconsciously) realize that the way you look – which mostly has to do with what you have, and is therefore a representation of how much money you have, which is how money begins to equal worth – determines your social standing, and your dating pool. (This tends to only be true as kids sort into cliques and social labels, but as we all know, foundations we lay in childhood are what we build our lives on.) Those things – social standing and dating – at a core level, translate to us as inclusiveness, survival and pro-creation. We’re neurologically and physiologically hard-wired to freak out if we don’t have them.

So our desire to consume, and keep in excess, and seek in excess, is associated with this core need. The process of letting that go is learning to see and think with a grown-up mind, one that can process animal instincts in a way that a child brain cannot. This is brutal and gripping and raw and if you think those words are exaggerated you have not yet done it. Your base instincts are being dismantled, and if we know anything about those guys, it’s that they fight to keep themselves known.

But once they’ve been rationalized – talked down, sorted through, leveled out – the rest is pretty easy. Since I left the last box of clothes off at Goodwill, I’ve noticed even the smallest details of my life changing.

I spend significantly less money. I eat better. I sleep better. My relationships are flourishing in ways I never could have conceived of before. My work is easier because my space is usually feels inspiring. I’m more grounded. There’s less to do in the day. I must be routine, and clean, and mindful. There’s no other choice. I have, in some subconscious, physical way (which is always easier than trying to beat your consciousness into submission) let go of so many years of packed up attachments.

I don’t plan on going anywhere, but if I so wanted to, I could pack that box and tie my bed to my jeep and leave. Today. In an hour. I am free in a way I never have been before, but it’s even more liberating than that, because maybe for the first time, I don’t want to go anywhere. I don’t want to be anywhere but here.

I am a person on a radical pursuit of happiness. It’s not so much a choice as it is how I’ve always been. This, to me, doesn’t mean the “high” that we get by feeding our base instincts (the best of everything, and more of it! Now!) but by carving out meaning, and purpose, and being able to find absolute peace and resolve even amid the chaos and pain of life. It’s the ability to no longer categorize experiences as positive or negative, but to see how they are all tools for growth, which ultimately means, tools to be able to feel peace unconditionally. To know the choice is yours, and to know how to make it.

I’ve always known happiness resided in simplicity, or maybe, I knew of it, but I hadn’t experienced it yet. Every time I’d let that belief creep into my mind, the fear voice would stave it off, and surrounded by my own clutter I’d remain.

I can theorize and philosophize all I want about why it is that my mental-emotional life changed so radically because of this, but ultimately, it comes down to one thing. A big life is not something that happens on the outside. It is not what you have but why you have it. It’s not who you are, it’s what you do. It is the unprecedented lightness of a cup of tea in the morning, the grounded, purposeful resolve in cooking every night, the ability to let hours and days go by untouched, lost in meditation or books or company. To approach what must be done with gratitude, each action intentional and purposeful. When you’re done trying to steroid what you see to make it feel better, you can fix what’s driving you away from the moment in the first place.

For me, it was the lifelong complex of feeling a little different, odd, unloved, unaccepted, and all the (mostly self-created) experience that affirmed this belief, the moments and glares and comments and losses that cemented that ache in its place in my heart.

I will probably spend the rest of my life learning to get out of my own way. One thing I know to be infallibly true, in the beautiful words of Anaïs Nin, is that things are not as they are, they are as we are. I thought that releasing everything I had would free me, but it didn’t. I did. I chose. I changed. My space, and everything else, just reflects that now. And maybe it always did.

Decluttering Inspirational Lifestyle Minimalism Purge Throw It All Away