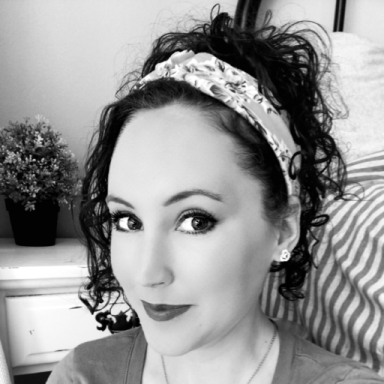 My legs ached from sitting on the porcelain throne, it had been 45 minutes of cramps, god-awful cramps. I silently gave myself a pat on the back for investing in a squatty-potty, at least I was somewhat comfortable in the awkward angle of having my knees bent up to my shoulders. I peered down through my legs to see the blood-filled bowl. I shouldn’t have waited so long to see a doctor.

Let me rewind a little, this all started during gym class.

Before that day, I had religiously worn pads during that dreadful time of the month. For some reason, my mom was a stickler about me using tampons, something to do with religion and virginity. I tried to tell her a million times that’s not how it worked, but she refused to budge on the feminine hygiene debate.

So, I reluctantly agreed and wore the pads she bought me, or in her words, sanitary napkins.

On this particular day during gym class, we had a guest speaker come in to talk to us about puberty. I was a freshman in high school, so this information had been ingrained in my memory since I was nine years old. Although it was boring, everyone was excited about getting out of running for the day.

Who could have asked for an easier gym class?

By the end of the talk, we all got little goodie bags with deodorant, face wash, and low and behold – tampons. It would be a lie to say I wasn’t somewhat intrigued to try them out. I knew I had to keep it a secret from my overbearing mom though. If she saw them she would surely take them from me. I could practically hear her voice now, “No, Maria! Your body is a temple! You can’t taint your purity with this!”

The cramps didn’t start right away.

The first time I inserted the tampon, it felt a little uncomfortable, but from what my friends told me, that was normal. The uncomfortable feeling began to get worse though, soon it turned into a constant itch. The itch would leave me squirming in my seat, then racing to the bathroom to repeatedly wipe myself.

My friends told me I probably just had a yeast infection, so I went to my local Walgreens and snatched a box of Monistat over the counter. Except, that didn’t help at all, not even a little bit. The itch started to grow into a sharp pain that wouldn’t go away.

At this point, I decided to stop using the tampons all together, even though my friends swore it wasn’t the tampons causing the harm. I honestly was just too uncomfortable having one in at this point.

Shortly after I stopped using the tampons is when the bleeding started; every day, all day. What was once a four-day, light period, had turned into a heavy, painful period all month long; a period that ceased to end.

I was genuinely starting to worry about my health at this point, but I was too afraid to confess to my mom about using the tampons.

During the presentation in gym class, I remembered the speaker mentioning irregular periods, and that they were normal. I chalked all my odd symptoms up to this and decided to brush it off. Perhaps if I just waited it out, I’d be back to normal in no time.

The continual bleeding started to get heavier and darker. Eventually, the blood was starting to look like a black tarry substance. Was this normal? It couldn’t be…could it?

I let this continue for 3 months. Yes, I know what you are thinking. How could I be so oblivious that something was wrong? Well, I’ll tell you how I was scared. I was so scared of what my mother and doctor would tell me that I pretended like nothing was wrong.

Read this: I Hacked Into A Cam Girl’s Computer And What I Found Truly Terrified Me

I couldn’t be abnormal.

Perhaps, if I pretended like everything was ok, it would eventually be ok; that would become my reality.

By now, I had become used to soaking through my pads. I’d carefully wrap them in enough toilet paper so that my mom wouldn’t be suspect to the black tarry substance.

Then out of nowhere, things became worse.

The sharp pains began to radiate down my legs and up my torso into my chest. It felt like lightning was striking my body, and after each strike of pain, these intense cramps would rumble through my uterus, the thunder to my lightning.

At this point, I couldn’t wear the pads anymore. I was soaking through them within the hour, so I started using dish rags to sop up the overflow of blood.

Yeah, it was embarrassing waddling to school with what looked to be a diaper under my jeans, but I couldn’t bear the thought of knowing what was truly wrong. I was petrified of finding out what was going on inside my body. Could it be cancer? Would they take my insides out? Would I be able to have kids one day? Would I…die?

All these thoughts were too much for a 15-year-old to have to handle in her first year of high school. So, I did what teenagers do best, I hid it and kept it a secret for a little bit longer.

The pain grew worse, and the bleeding became heavier. I knew things were bad when it became difficult to walk, it felt like my insides were rotting away. With each step I took, I felt like my uterus would detach from my body and fall out, straight through my legs and into the dish rag.

I had finally had enough when I woke up in the middle of the night in agony. I couldn’t hide the pain or torture I had been going through any longer. I wailed from my bed, hardly able to move when my mom came running in, eyes wide and mouth hanging open.

I couldn’t respond to her, all I could do was scream out in agony. The pain was fierce, and I had dealt with it for too long to keep my composure for one more second. My mom’s fingers tips pulled back the comforter on my bed to reveal the black pool I had been swimming in; blood licking the inside of my thighs.

The emergency room didn’t keep us waiting for long. I think the black trail of liquid following my tail end had “urgent” written all over me.

“Ok, sweetheart. I’m going to need you to try and hold still. We can’t get a proper image with you moving around so much. Can you hold still, please?”

I was laying on the hospital bed, curled up in a ball, writhing in agony. Did they really think I could hold still long enough for them to rub their wand over my stomach? I didn’t have time for a test. I wanted them to put me out of my misery. I wanted to go straight into surgery to have my insides gutted out; anything to get me out of this pain.

Three nurses peered in through the doorway, the nurse that held the wand nodded to them, and then they proceeded to circle my bed. I bellowed in pain as they held me down, forcing me to expose my tender stomach to the cold wand. The pain was indescribable. I thought I would surely pass out at any moment if I was forced to endure one more miserable second of this.

After a few minutes, which felt like hours, the nurse that held the wand pointed to the screen on her computer; her mouth gaped open in unison with the other nurses. Nothing was said to me, but I knew things were bad when all four nurses rush out of the room.

It wasn’t long before I saw a herd of white lab coats running into my room. Before I could muster the strength to yell anymore, a plastic cup was placed over my nose, followed by darkness.

So, now here I am sitting on the toilet with a constant stream of blood flowing down my legs. You’re probably wondering what happened next. Well, I was placed in emergency surgery to have a hysterectomy. The doctors concluded that when I had inserted the tampon, there must have been a spider stuck inside the cotton; a manufacturing error. Once the tampon became wet and soggy, the spider came out of the cotton casing, scurrying up into my uterus.

The thing had camped out in my uterus for a while and eventually grew, feeding on my womanly flow once a month. The doctors measured the thing to be 8 inches when stretched from limb to limb; a huntsman spider.

This story is absolutely embarrassing and disgusting to tell, but I can’t bear the thought of another woman going through what I went through. The doctor said if I hadn’t waited so long, they could have salvaged my uterus before it completely rotted out, but it’s too late. I won’t be able to have my own kids, all because I was too scared to get help.

The recovery has been going smoothly as of now. Once the draining stops, I at least won’t have to worry about having a period ever again, and tampons will just be a distant memory for me.

If there is anything you take away from this story, just promise me one thing – check your tampons before you use them.