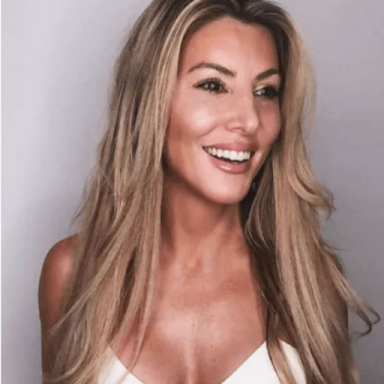 Last Saturday morning, as I laid in bed, half awake, under eyes covered in the mascara I will tell you that I didn’t leave on my lashes, I grabbed my phone and popped onto Instagram to see what I had missed when I fell asleep at an embarrassingly early hour.

After liking my friend’s babies and checking in on Harry and Meg (natch), I found myself on the page of a woman in her mid-twenties who quickly became my #WomenCrushWednesday four days early.

From her elegantly monogrammed pillows and fresh-faced 5AM juice selfie to her 8-week post baby six-pack, I felt I had a solid understanding of her daily routine, and I was in awe. From the state of her perfectly lit gallery, it was clear that her mornings begin with cartoon birds which hummed softly as they slowly caressed her cheeks to a peachy perfection and gently pulled back her 1,000 thread-count sheets so that she could slip into the terrifyingly expensive slippers gifted to her from some known-only-to-A-listers brand.

She would then stretch, sip a cup of lemon water, change into her new athleisure sports bra and yoga pant and then walk into her massive all-white kitchen where she would sip some sort of matcha vegan soy concoction and down a litre of oxygen-infused coconut water before joining her sexy, foreign trainer on her balcony for some kind of seaside workout (likely pilates with a kickboxing twist).

This is followed by breakfast – always a colorful Acai smoothie bowl with perfectly cut fresh fruit lined in a way that can only be described as militant. Then, of course, she changes into her flowing white off-the-shoulder dress, grabs her baby (who has now woken from his 8 hours of uninterrupted slumber, fed himself and given himself a bath) and walks down their local steps in Santorini where she lives in a Smurf-like influencer community. She, like the other influencers, only leaves this area when she gets impatient to see the world, hence the photos of her in front of major world landmarks pulling the hand of her assigned photographer who was hired by the government to document her perfect life and keep us all aware of our hashtag life goals.

Now, I don’t know about you, but this isn’t my life. First of all, my pillowcases are not monogrammed and are halfway off of my pillow and covered in drool when I wake up to go to work every morning. You see, I have a job and before I go to said job, my day usually begins like this:

I wake up looking like a muppet to the sound of my boyfriend’s grating alarm and his moaning that he wants to stay in bed and something about whether or not he should take the chicken wings to work for lunch. I then spend the next 2.5 hours doing some combination of hitting the snooze button, slugging down a coffee, rushing through a workout (or moaning that I am too rushed for one because I hit the snooze button too many times), losing and finding my keys/shoe/card and then dealing with the silent rage of 1,000 plus London commuters as I take both the District and Northern line into the office (I deserve your pity on that last line alone).

No matter how cute I try to look standing on the platform or how many filters I use, the London Tube isn’t glam and if I try and pull anyone’s hand while moving towards a landmark, I will likely get a firm “SORRY!” and perhaps arrested.

Just like the uncool person I was in high school, I will never fit in with the popular crowd in Chelsea, let alone the so-glam-it-hurts Instagram universe where 100,000 Influencers, both real and aspiring, live fabulous lives making adorable Boomerang videos in bikinis while eating oysters and drinking pale rose on yachts straight out of a JLo video.

Influencers are living the dream and we should applaud them:

They never have bad days.

They never have to deal with other people’s moods.

They don’t have a dick boss or passive-aggressive coworkers to deal with.

Their start-up’s do well without the stressful “starting up” part.

They never spill anything on their white clothes (amazing)

They are never stressed out by an automated system or a dropped call.

They always have plenty of money, time, clothes, sleep and blueberries.

Now, let me be clear: I am not on some kind of hate tour and I love a filter. I travel as much as I can, and I would love to walk those damned steps in Santorini, but even more than that, I would love to wear a white dress without getting some massive stain on it for more than 3 hours in my life.

Here’s what else I am not doing:

-Doubting that some influencers live this life of lavish, luxurious, leisure.

-Making some kind of sweeping moral statement that keeping up the appearance of this life is not a difficult and respectable job.

-Denying these men and women bring pleasure, inspiration, and happiness to many of their happy followers and they have a proven value in positively impacting a brand’s bottom line.

I am just saying is that I personally don’t live that life. I would if I could, but I don’t and I never will. I spill things. I retain water when I eat chips and drink Rose, and break out if I eat a lot of fluffy pastries and carbs. I can’t afford to fly all around the world, and if I could, I would want to go with other people I love the most (who can all be moody little shits who wind me up at times). Oh, and my boyfriend would rather be in a local pub than a 5-star restaurant and would have a full-on meltdown if I spent 1,000 on a suite for the night just to take a bubble bath. So while you might be able to find your place over the rainbow, I am out of the game.

If you have also realized that you’re never going to live that perfect, sexy, InstaLife, here is something you need to know: It’s not that big of a deal. No, really. No one cares. More than that, the reason you’re not living that life is not because you’re not cool enough, rich enough, thin enough, beautiful enough, ripped enough, connected enough or whatever else enough, it’s because you have chosen to live in a messy, complicated, adventurous and completely unpredictable world with the rest of us.

You have decided you enjoy making memories laughing with loved ones when we do something completely moronic. You likely want to know that your partner sees your beauty even when you look so ugly you could scare a child in pitch black darkness and you want to be with people who can deal with the reality that children can be as loud, messy and irritable as often as they can be quiet, sweet and cherub-like.

You want to know that we see the real you, and not only do we like it, but we also get it. We understand that sometimes you’re going to suck, your baby might scream its head off on the plane and there may be a day when we bump into you at the corner store and it looks like you might need a shower. We get that we all have different body shapes, wrinkles, heartaches, personalities, experiences, dreams, birthmarks, moles, hurts and hairlines. Mostly, you want to know that we all can still accept and identify the beauty and worth in ourselves and others without a filter.

And we can. Maybe we just need to do it more.

Curate a life you Love

The Key To Being Captivating