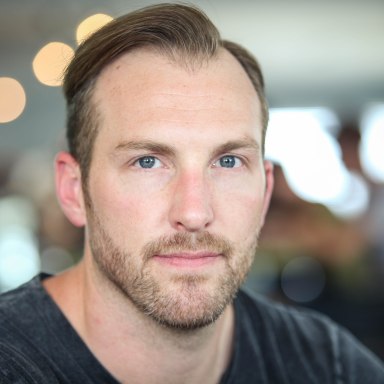 The interior of the restaurant’s dim lighting gave an ambiance meant for lovers sharing an intimate meal over Tex-Mex. Not that such a thing was possible when you’re sitting across from your mom. The whole scenario awkward, I stared into my menu telling the cute waitress what I wanted to eat, while my mother cleared her throat multiple times. She probably thought it rude that I refused to look at the pretty redhead, but when you’re 16 and shy around women, staring into the face of the opposite sex is the equivalent of facing down Freddy Kruger on Halloween.

After the girl left, my mom and I resumed our small talk until the waitress once more returned with our food. Once I took a bite out of my enchiladas, my mother chuckled out loud.

Jaw unhinged and half sticking a bite into my mouth, I stopped. “What do you mean?”

My mom gestured a hand across the dining area and exclaimed, “The waitress! She’s eyed you every single time she’s come to the table!”

“Yes, really! My goodness, Benjamin. You wouldn’t know if a girl was flirting with you to save your life!”

This was true. Throughout most of my childhood I’d been so afraid to ask a girl out I just wouldn’t — even if she seemed interested. Confronting the opposite sex, asking a girl for her number, or even giving a compliment made me feel paralyzed. Instead, any girlfriend I had was because of their doing. I was the dense simpleton for which they had to spell-it-out. At age eighteen, the girl from the Mexican restaurant would become my first long-term girlfriend, and only because my mom told me I should ask her out. Even then I didn’t. I had my friends find out if she liked me, just to “make sure.”

This practice would continue until I was 29 years old and asked a friend to investigate whether the girl I was interested in — who would later become my wife — thought I was cute. My friend’s response is one we forever recount when she glared and said, “Why don’t you ask her out yourself, ya wimp.” So I did, and the whole debacle blew up in my face. She de-friended me on Facebook and told people I was a creeper. I was smart enough to understand boundaries and didn’t press the issue, but when the opportunity presented itself again six months later at the urging of the same friend, she gave me a chance.

For most men, we seem to vacillate between overly confident or terribly shy when thrown into the dating pool. Many men don’t know good boundaries or think we can win a woman over through nagging persistence. For those of us too shy, we shoot ourselves in the foot before the race even begins. In both situations, men don’t understand how to be bold and courteous. Instead, we appear creepy or cowardly. It’s one thing for a man to approach a woman and get shut down only to reply, “My apologies ma’am. I misread the situation. Have a good evening.” It’s quite another when they become aggressive, weird, or antagonistic.

Besides my shyness, I also had to deal with a fear of rejection that drove my intense caution. But facing down rejection is paramount to becoming a resilient man. We all know this to be true because of stories like Michael Jordan and Stephen King. Jordan couldn’t even make his high school basketball team, and Stephen King tacked rejection letter after rejection letter on his wall until an agent said yes. In dating, however, we fear if we ask a woman out and she rejects us, it’ll be like a movie scene from every high school Rom-com where she whispers, “Ew. Can you believe he asked me out? As if.” If a woman is that shallow to make fun of you, then the real issue is her. Plus, that’s not the person you’d want to date, anyway. While she may be stunning on the outside, she’s ugly on the inside. So let’s recap and summarize on the first thing that will help you become a more dateable man.

Be bold and courteous when you ask a woman out. It builds character and courage.

“The bravest sight in the world is to see a great man struggling against adversity.”
— Seneca

No one knows whether or not they’re in a relationship anymore. They don’t want to appear clingy or move too fast and lose a good thing. Nowadays everyone stays in purgatory, uncertain what the hell is going on. Does she like me? Is she interested or just playing games? Should I tell her how I feel? Or would that push her away?

Most of us want to be honest about our feelings, but believe our honesty would betray us. But where is the dignity in being a liar or fraud? Call it what you will, but playing it cool is still deception because you’re not being truly who you are. You’re pretending to be the person you assume she wants, and that makes you a fraud. The opposite of manipulation and playing games is honesty. This doesn’t mean you pour your guts out with a power ballad playing in the background. Instead, have the courage to say, “I like you, and would love to see you again.” If you feel things are moving too quickly, ask for some space.

My wife likes to tell one of our dating stories to other young couples as an example of brutal honesty. During a movie one evening, I turned to her and said, “I actually don’t like it when you caress my arm. It tickles.” Shocked, she pulled away in frustration. After all, she was trying to be sweet. After we talked, I explained that while I loved to be touched, I wasn’t fond of tickling. I could have kept up with the charade and secretly resented her until I flipped out one day, but I was honest instead. If you go on a date and aren’t into her, be honest (and polite). If you like the girl, tell her. If you need space, be upfront. Honesty will pay far more dividends than deception will.

Be honest. Manipulation, deception, and insincerity are the indications of a doomed relationship where both parties don’t know the other.

“Where is there dignity unless there is honesty?”
— Marcus Tullius Cicero

When Taylor Swift’s “Blank Space” dropped I became baffled by a portion of the song. I swore she kept singing, “Go to lonely Starbucks lovers, they’ll tell you I’m insane.” The actual lyrics, however, are “Got a long list of ex-lovers, they’ll tell you I’m insane.” Given that I’m a Metalhead, most times I expect pop songs to have superficial or downright silly lyrics, so the words made sense. I shrugged, and concluded Taylor Swift was, indeed, insane.

In his book, The Seven Habits of Highly Effective People, Stephen Covey lists habit number five as “Seek first to understand, then to be understood.” Listening is something many of us don’t do well. A lot of times when someone is talking, we may be already formulating a response in our head, grabbing key parts of the conversation, only to miss the meaning entirely. For example, when I listened to Taylor Swift’s song, I’d already concluded the ballad would have some level of absurdity, so when I misheard lyrics, it made sense to me.

Many women have complained that — when on a date — a guy will only talking about themselves instead of listening. Or if they do, they interject with their own experience. Covey explains we listen “autobiographically” and often respond in one of four ways:

Evaluating: You judge and then either agree or disagree.
Probing: You ask questions from your own frame of reference.
Advising: You give counsel, advice, and solutions to problems.
Interpreting: You analyze others’ motives and behaviors based on your own experiences.

There may be resistance to hearing these autobiographical messages because, after all, you’re just trying to relate by drawing on your own experiences. While this technique may be appropriate in some responses, most times instead of seeking to understand a woman’s point of view, you’re comparing it to your personal experience, and it negates what they’re feeling. Most of us would do well to practice the art of active listening when on a date. Ask questions. Reflect and reiterate what they’ve said to show you understand. When you listen on a date, it’ll show you and care about what they have to say and feel. Who knows, you might just get a second date out of it too.

Learn to listen. Mirror and reflect what they say. Ask questions to show you care.

This article was brought to you by P.S. I Love You. Relationships now.

Ben Sledge works for HeartSupport, a non-profit dedicated to helping people brave their wounds, find courage, and fight for progress in their lives.