I grew up as a punk rocker and later transformed into a metal head. I always knew what a juggalo was, I even went to school with some, but I never really knew one.

For those who aren’t in the know, “Juggalo” is the name for a devoted fan of the horror rap group ICP (Insane Clown Posse). A “Juggalette” or “Lette” to be more specific is a GIRL fan of the group. And when I say fan, I mean these people save money to go to every show to buy every album and support the band by wearing merch t-shirts, pendants hats, and taking unpaid time off from jobs they sometimes don’t even have to get to events to see their juggalo FAMILY.

I would write them back and say, “Thanks so much for the support, but no, I don’t go to ICP shows.” I even TWICE had the chance to perform on stage while they played live and I passed it up. To tell you the truth…I always kind of secretly judged them. Maybe not even really secretly. They were easy to make fun of for some reason.

I guess, the same way people make fun of ME and don’t understand ME or the family that I have in the flesh hook suspension community. How we all travel to see each other, tattoo each others crews names on each other, raise kids together.

Just the same way people make fun of me and my stinky metal head friends. But we all know each other, go to the same shows, love the same bands with every fiber of our being that we drive all night, and spend our last dollar to scream the lyrics and headbang along and feel like we’re among comrades for just that magical time. All the while society yelling at us to “get real jobs!” Yeah, I know that feeling, but we were all just trying to exchange every with like-minded folks.

I never really looked at juggalos that way. It was too easy to make a joke out of them.

Probably because I never really KNEW one.

Well, one of My favorite photographers, Chris Addams, began shooting this young fetish model who had just moved to town, Wendy Michelle. Wendy was a Juggalette. I mean, she even had the tattoos. She wore the colors and went to the shows and competed in the pageants and the whole nine yards.

She was goofy and they made these funny youtube videos together, the Wendy Child show:

Well, I sorta just fell in love. I knew I wanted to shoot her and shoot with her and make clothes for her and hang out with her. So we met and got along swimmingly well and started chilling. We liked the same things mostly, drinking 40s by the train tracks, taking weird pictures, and smoking weed.

I never really suspected we had much in common in the way of musical taste, but slowly and surely, she divulged her love for classic rock and we bonded over that.

On my birthday last year, she came to my show and I invited her on stage for one set. She danced and did pole tricks like it was second nature to her. So, shortly after that she got a job at the club I was working at and we had crazy amounts of fun. We made a lot of money hustling together. We even twerked together. It was then I discovered her love for old school hip hop — she actually knew a hell of a lot about it!

I liked this chick more and more the more we hung out.

She was thinking about moving away and in an effort to keep her around I asked her to move in with me. So she did. And for six months, we had adventures and trials and tribulations and parties worthy of a 90s sitcom almost every day.

We made a lot of weird art, traveled, danced, made money… and we were really cold, and depressed during winter.

We were so cold and depressed, one night we were passing a bottle back and forth to keep warm and showing each other videos on Youtube of our favorite songs and such. I was showing her some hip-hop stuff and she was saying, “Oh yeah, such-and-such a person has connections to ICP here’s a song they did together.”

OH WAIT…HMMM…DO I LIKE ICP? I was having self doubt.

Along with ICP comes a host of offshoot record companies and among them are some female rappers. I got sort of obsessed with them. Because there’s some nasty nasty shit going on there and I sort of loved how this whole counterculture was embracing women artists. It’s not like that in most of sub genres of music.

I filmed a video of Wendy Michelle dancing at this awesome hole-in-the-wall club. I asked her if she had any juggalo friends who would let her use their music and she got all excited and told Me about Razakel. I didn’t want to sink too much deeper into the juggalo hole so I told her to ask permission and pick a song and get it to me. But Wendy dropped the ball there so I ended up ordering two Razakel CDs and listening to them to try and pick a song.

Trouble was…I liked a lot of the songs and it was hard to pick.

FUCK ME. I Like Razakel. There. I said it. I played it really loud while my boyfriend was at work. If I liked Razakel, chances were I liked some other ICP stuff too, so I stopped and put the CDs away and picked two songs.

We ended up making this cool video, and even an extended version with nudity and TWO of the songs.

So, a lot of Juggalos are confused by me I think. I mean, I’m besties with their princess Miss Wendy Michelle, and I made all the outfits she wore at the Gathering Of The Juggalos this year, and I’m already planning what weird party we’re gonna throw together next at the stripclub. 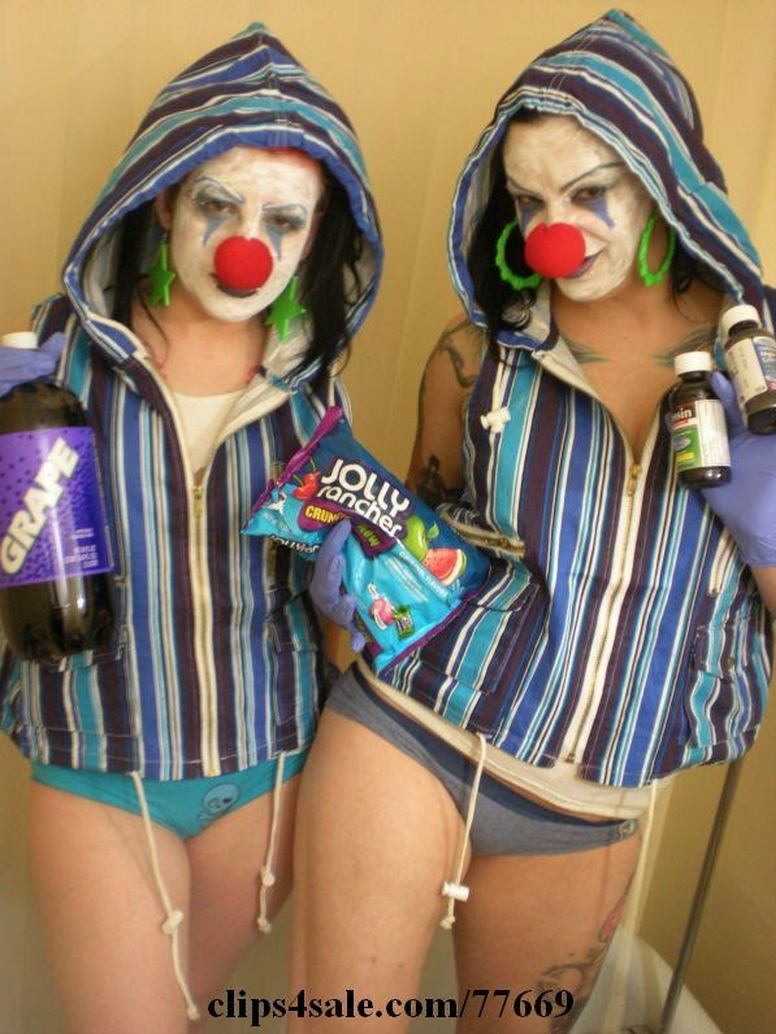 Every year someone tries to take me to the gathering and I have to be honest, I am more and more curious. I mean, my suspension friends even do performances there now! My people are already there. My people ARE their people… am I a Juggalo?

No, I’m sorry, I’m sorry I’m not. I’m sorry if that makes you upset. I get it now, though. I don’t judge juggalos. I have mad respect for anyone who can be that passionate about anything at all.

And I love a juggalo.

Loudly and proudly I love that bitch Wendy Michelle

I love one so how can I hate on them? Maybe everyone just needs to learn to love a juggalo and then they won’t the the “most hated band in the world.”

I Am Slowly Learning That Love Takes Time

How My Exes Showed Me The Love I Deserve

This Is How I Learned To Stop Fearing Lost Time