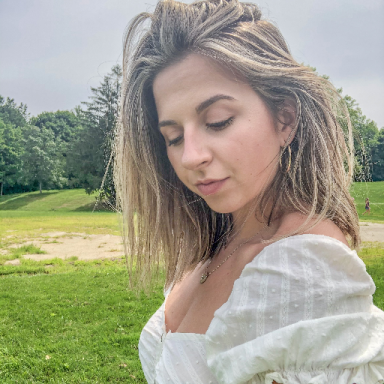 It was always meant to be a circle.
An infinite line pulled along by a pencil in some perfectionist’s hand.
Just enough force to embrace its curves at exactly the right moment.
The satisfaction of rounding the line and
Meeting right back where it started from.
Completed and whole.

The embodiment of Alpha and Omega.
The Beginning and the End.
One you cannot have without the other.
Sometimes not knowing when one part began
Or when the next part is ending.

And suddenly the perfectionist stumbles.
She loses sight of the circle.
And suddenly those curves come just short of their starting point.
They dip a little lower,
Like missing a turn on your navigation,
Not sure when or where the next curve will bring you back to your destination.

You try to course-correct, taking the next street and backtracking.
But this turn isn’t getting you where you wanted to be.
Your starting point dissipates, and the worry sets in.
You feel lost, trusting the wrong lines in the road.

You try again with the next street, looping around, knowing in your heart
That this has to bring you back to the start.
Or the end?
Where were you even trying to go?

The only thing a circle and a spiral have in common
Is the fact that they both never end.
Both caught in a trap neither can exit.

Except the spiral struggles more than the circle.
The spiral can’t count on meeting its beginning in the exact same spot it left it.

It needs to anticipate where it’s going or it might run out of room.
Run out of space.
Space to be.
Space to breathe.
Space to exist peacefully.

The spiral is always thinking of its next move.
Anticipating the what-ifs
And judging it’s not-so-pretty past.
Wondering when exactly the moment was that it fell off its original path.

This new, unfamiliar shape
Foreign to the naked eye.
Slowing caving in on itself
But making sure to give others the illusion
That it has everything under control.
A predictable pattern, but downward.

Knowing she did everything she could to embody that circle.
Because everyone was counting on her to be that circle.

She holds onto the idea.
And she holds on for dear life.
Because she cannot fathom a world where she can simply be
Admired for her edges.
Revered for her imperfections.
A shape, unnamed.

I have short thumbs and a talent for reading people.

How To Draw A Horse: A Step By Step Guide

How To Draw A Cat That Looks Realistic

How To Draw Eyes: A Step By Step Guide

How To Draw A Face: A Step By Step Guide

Alexa, Set A Reminder For Me To Figure Out My Life

How To Draw A Wolf: A Step By Step Guide