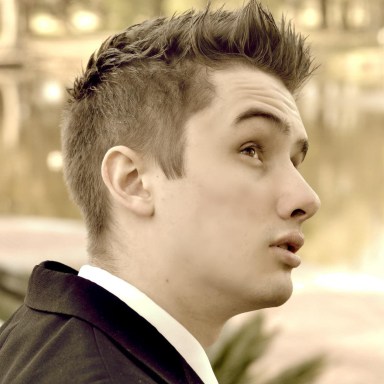 Hi, it me. The lowly INFP with all the struggles, a new one of late called “extroversion”. Sometimes, this social “E” creature comes out to play; maybe I’ve been an ENFP all along? Who knows.

Whatever, I’m tagging all the xNFPs in this.

Us Intuition-Feeling-Perceiving types, leading with Ne and Fi (Google it), like to focus on our interactions with the world and imagine how it all could play out. For the turbulent xNFP, this means a constant inner dialogue of “what if I did the most outrageous thing possible in this moment, and what would the reaction be?” running through our mind.

Maybe it’s my Myers-Briggs type, maybe it’s my being insane. I’ll measure the ratio of “HAHA this is so me lol” to “This list is BS. Kick rocks, Beau!” to scientifically determine whether these 8 turbulent thoughts are exclusive to turbulent xNFPs, or just turbulent me.

1. Getting out of the car to give that person who just cut you off a piece of your mind

You’re on the interstate in bumper-to-bumper traffic. It’s not like you’d be impeding the flow in any grand way. Yet as convenient as it sounds, pulling a Kidz Bop Karen™ and going yell at the driver through the passenger side window just doesn’t sound like the prelude to any happy story. Thus, you stay seated calmly in your car, uttering a sarcastic remark that would have been the funniest thing in the world had anyone else been around to hear it (more on that at 7).

Maybe it’s the superhero/action preoccupation our types often have, but who else would just love to see a robber in the act, grab the nearest blunt object, and go all “Jackie Chan” on them? You could be on the local news as the one who saved a billion-dollar department store from losing $500; how cool is that!

3. Thinking about a rebuttal to a debate you lost 4 days ago

I’m pretty sure everyone does this unless you “never lose debates”.

4. Leaving behind an absurd amount of wealth behind when I die

I’m broke, drowning in student loan debt, and I have no will. Yet I always dream about how my next of kin will inherit this massive wealth of mine I’ll have one day. As if I’m working my life away just to watch from the grave as my nephew drives though the Hollywood hills in a Lamborghini.

5. Doing something completely weird/rude while in a deep one-on-one conversation with someone and wondering how the person would react

You’re having the deepest, most heartfelt conversation with an almost-stranger. Suddenly the urge comes up to say something absolutely atrocious to, make a weird animal noises at, and yes, even boop said person on the nose. You think, “What would they DO? Why am I thinking about this? Am I a psychopath!?”

6. Saving the life of a choking victim

If you’ve ever watched Mrs. Doubtfire, you’ve also daydreamed about sprinting across a panicked restaurant to do the Heimlich (which you may or may not know) on someone who (may or not be) choking. Hopefully, you also weren’t the one who made them choke in the first place.

7. Posting/saying [what you believe to be] the funniest thing in the world. . . and regretting it when no one reacts to it.

This is one of the types of thought that usually ends up being carried into action. We xNFPs like to amuse people. We say stuff and hang desperately on the reinforcement of a laugh or “HAHA” react button. Sometimes it works out and we bask in the glow of a room of laughter or a 20-hour period full of notifications saying, “So-and-so reacted to your post.”

But when it DOESN’T…

This could be the fate of this article, and honestly, I’m scared.

Which brings me to…

8. Imagining “what if I wrote a whimsical article mid-turbulent-thought and submitted it, then Thought Catalog PUBLISHES me???”