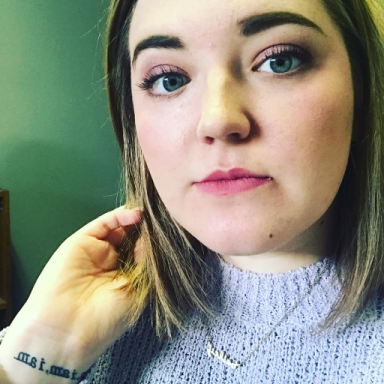 Thanks to SVU Law and Order, endless true crime podcasts, and my morbid curiosity, I thought I had a pretty clear idea about what sexual assault meant. But then it happened to me, and I didn’t accept it for what it was.

For the longest time, I thought it wasn’t okay that I was angry about what happened to me. It was okay. It’s normal. Because in all that time, I never accepted that what happened to me was sexual assault. I laughed it off as some creepy, uncomfortable experience that happened to everyone. Maybe it does happen to more people than you think (according to RAINN, an person in the US is sexually assaulted every 73 seconds), but that doesn’t mean you think it will happen to you. Or that it already has.

I was 18 when it happened and 24 when I came to terms with what it was—25 when I told someone else. And all that time, I was angry. Angry at myself, at first, for “letting it happen”, then angry at him for doing it.

This quote from Isaac Rowe resonates most with me: “I sat with my anger for long enough, until she told me that her real name was grief.”

I thought that I would never, ever be able to let go of that anger. Because how could I? He assaulted me. He violated me. He changed the way I felt and thought and lived. I think it’s normal to hold a little anger against the person who hurt you, even if it might be unhealthy to do so. The famous thing I think of is that being angry is like drinking poison and expecting the other person to die. But I don’t think that’s true. Being angry is a way of regaining control of a situation, of feeling something. Because the only thing worse than being so angry and so sad is feeling nothing. And I’ve been there. But it took years of therapy and a lot of self-reflection to realize that it really is grief that I’ve felt all these years, that my anger gave way to grief a long time ago.

And I know all the things that are supposed to make me feel better. I know it wasn’t my fault; I know that I couldn’t have prevented it from happening. I know he was in the wrong and that I was the victim. Sometimes knowing all the right things doesn’t make any difference in how you feel.

Now I know what happened to me was, in fact, a sexual assault. It has a name, and it has a face. I can picture his face and I can hear his name in my head, even though I haven’t spoken it. I remember that ugly sweatshirt he was wearing and what we were talking about before it happened. I don’t remember how I felt, though, when it happened. Even though the events have played over and over in my head for months now, I’m still unsure. I remember the discomfort and awkwardness; I remember what he did. I remember what I did. But really, the feelings are a mystery to me.

It took me years to process and accept what happened to me. Now I live with my anger that’s really grief, and I struggle with the fact that I still don’t feel healed. And I want to say the things I never got the chance to say to him.

I know you’re not reading this. We’re not Facebook friends; you don’t follow me on Twitter or Instagram. Snapchat was barely a thing when I knew you. But because of what you did to me, you’re always going to be a part of my life. And I hate you for it. I hate you, period. Fuck you for sexually assaulting me.

I think about you every day. And fuck you for that, too.