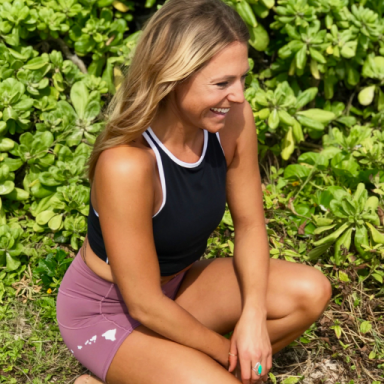 Joe* and I had never been friends. A chance meeting, an Instagram DM, and a shared love of spearfishing and camper van renovating brought us together last fall. A couple of hours underwater and a beer or two later, I believed for the first time I had found my soulmate.

It was the share-a-plate, come-over-whenever, spill-all-our-secrets kind of relationship. I met his friends — I adored his friends — and he met mine. Our kind of love burned bright, hot, and fast.

But as quickly as it all began, it was over.

At the time, I was blindsided. As a serial monogamist, I have been able to walk away from long-term relationships with nary a scratch or tear shed in the past. But after Joe drove off, I became the one muffling my sobs into a pillow at night and watching hours of New Girl with my head on my best friend’s lap to numb out the twisting and turning of memories playing in my mind.

This broken heart was aching. Not only did I miss him, but I also missed those I met through him and the adventurous yet relaxed lifestyle we shared.

Three months later, my phone buzzed. It was Joe. He was moving away in a few weeks and wanted to “part as friends.” There it was, the word we have all come to dread when seeking romantic relationships — friends, as in let’s just be friends.

As I mentioned in the beginning, we had never been merely friends. We dove right in.

At first I wasn’t entirely sure what to think or to expect from his reaching out. Did I really want someone who hurt me back in my life? I had a new job, a new apartment, and felt like a new person. I was doing well, really well, and I fought hard to get to that place.

I have never been one to stay friends with my exes. Though I do my best to part amicably, through miles or lifestyles I’ve always bid them farewell. I am also incredibly picky with whom I share my time with. While Joe and I did not share the same friend circle in the beginning, I grew to love several of his best friends as my own. I began to love him not only as a lover but as a dear friend. After we went our separate ways the first time, I lost touch with all of these relationships — not just our romantic one.

Out of sight, out of mind was what I thought was working the best for me.

It was during a therapy session after Joe reached out for the first time that I realized I didn’t just miss him but also the life I’d shared with some truly amazing people. In my hurt, I built a wall and moved forward by avoiding nearly everything we had experienced together — even our shared passion of spearfishing and a couple dear souls I truly loved as my own friends.

I was hurt deeply by our breakup, yes, and I was angry. But as the weeks passed and I dove in to deciphering my emotions with a clearer heart, the less angry I became until I felt I no longer had the right to be anymore.

It wasn’t until after I completed months of introspective work that I came to this realization: I could no longer be angry with this person whom I loved. He made a decision he believed was best for himself at the time, even if I didn’t agree with it. Even if it broke my heart. I, too, had to make similar decisions to protect my future and my heart in the past.

After some thought, when Joe reached out to be friends and invited me to join in group activities with acquaintances I hadn’t seen since the breakup, I said yes. He and I even rekindled our own time together, sharing conversation that truly built one another up. I began to see his friends as mine again, too.

Harboring resentment and hurt after our relationship ended did nothing to move my life forward. It didn’t help me heal sooner or forget him more. After our rekindling and subsequent moving out of state, our relationship changed again as well. But instead of a clean cut, we chose something different — more complicated, yes, but still filled with love and even genuine friendship.

Parting amicably with forgiveness certainly made life easier. I was able to restore relationships with those I met through him and no longer felt anxious entering our familiar haunts.

Writing a new definition of our relationship has allowed me to bid bitterness goodbye and instead look back in love while moving forward stronger and lighter than before.

* name has been changed

For the first 22 years of my life I had only dated left-handed men.