Most, of course, are of the NCAA Tournament variety. You know, the thing your irritating co-worker just emailed you a reminder about. The thing with all the upsets and buzzer beaters and college kids crying.

I love it. All of it — the upsets, the buzzer beaters, even the irritating co-workers and the college kids crying. Nothing can take my focus away from college hoops this time of the year.

Great idea right? There’ll be 64 songs, 16 apiece in each of the four regions: his three studio albums, (1) Section.80, (2) good kid m.A.A.d. city, (3) To Pimp A Butterfly, and then the (4) best of the rest, a compilation of some early work, guest verses, and special performances. They’ll be seeded alphabetically, so no one gets hurt. Perfect.

I even hired two guest judges to ensure fairness in the evaluation process.

First, my friend Wyatt, a hip-hop pundit with extensive Kendrick knowledge, but curious biases toward Drake and J-Cole.

And second, my girlfriend Katelin, who has likely heard of Kendrick, although it is unknown whether she has ever listened to one of his songs. She’ll gives us a … fresh perspective.

The three of us drove from Maine to Boston together, bickering about this for five hours. And then many more hours upon returning home. And then even more hours the following day.

When we began the drive, we had no idea we were HEADING TOWARDS INSANITY. 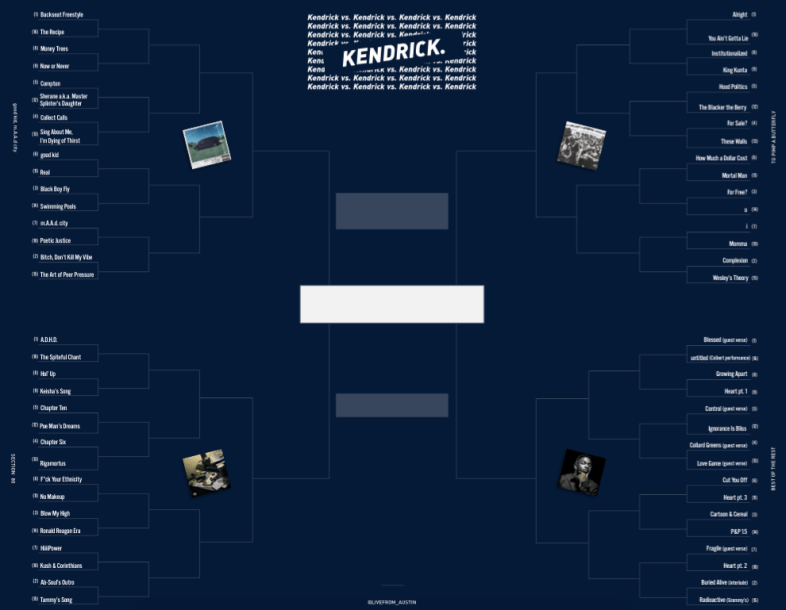 And here’s how it all went down.

Sing About Me, I’m Dying of Thirst def. Collect Calls, 2-1

Somehow, the right eight songs got through. One could argue for Bitch, Don’t Kill My Vibe or Poetic Justice to be included in the better half of the album, but ahead of The Art of Peer Pressure and m.A.A.d. city? No way. We were all in agreement. The only minor feud occurred when Wyatt and I voted out Mary J. Blige (featured on Now or Never), which, in Katelin’s eyes, lost us our credibility. Sorry, Mary J.

Sing About Me, I’m Dying of Thirst def. Sherane a.k.a. Master Splinter’s Daughter, 2-1

Again, the right four songs made it through. Each of these is at the core of what makes Kendrick great: unique sounds, experimentation, duality within tracks, voice alterations, and insanely profound lyricism. All three of us could see that.

Of course, my lovely girlfriend tried to push Sherane past Sing About Me/Dying of Thirst, but after cold-shouldering each other for 25 minutes, we made up.

Sing About Me, I’m Dying of Thirst def. Backseat Freestyle, 2-1

A true juggernaut matchup in the regional finals. The album’s best verse up against twelve minutes of unadulterated genius. The sprint or the marathon?

Sing About Me, I’m Dying of Thirst is Kendrick at his best. Simple in all facets, with some scattered quirks, palliative instrumentation, and overpowering lyrics. It deserved to win. We were all happy with it. Then Section.80 happened. 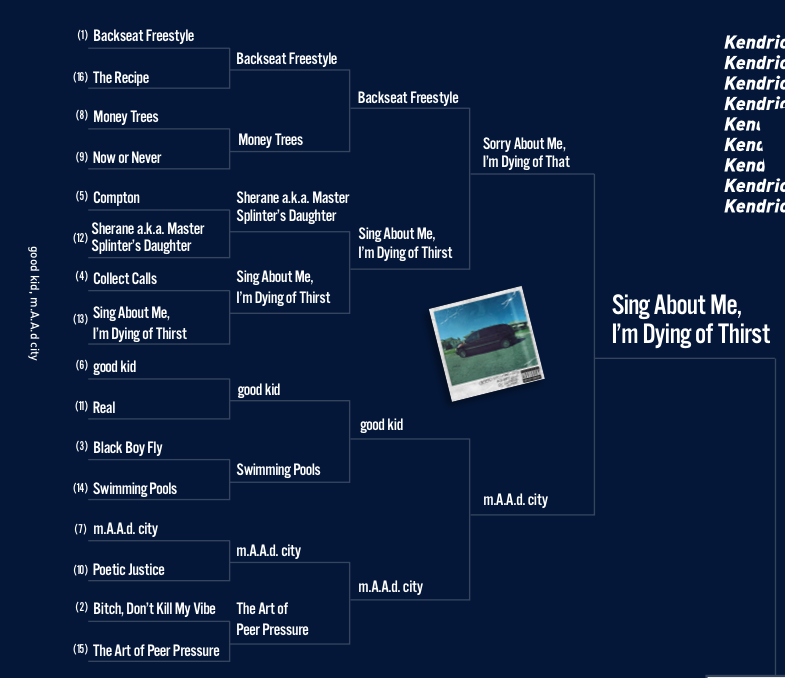 Driving Off The Road: The Section.80 Region

No Makeup def. Fuck Your Ethnicity, 3-0

Ugh. No Makeup versus Fuck Your Ethnicity. What were we supposed to do? Probably two top five songs on the album, matched up in the first round. We weren’t driving off the road quite yet, but I did have to console Wyatt as he cried into my chest. No Makeup is too unique and catchy to ignore, but watching Fuck Your Ethnicity go irreversibly worsened our moods.

Almost a unanimous round to recover from the No Makeup Nightmare. The only blip was Wyatt choosing Hol’ Up, because J-Cole produced it, and, again, Wyatt holds an absurd J-Cole bias. But it’s okay because Wyatt sucks and doesn’t shower as much as me and has stretchy skin.

Maybe it was lingering resentment, but the three of us — who, an hour or two prior, were the best of friends — were trying to kill each other with words after eliminating Rigamortus and No Makeup. I don’t even recall who voted for what. All that remains in my head is the horrifying image of Katelin ripping Wyatt’s slice of pizza straight from his clutches and tossing it out the window of a speeding vehicle. And you know what — none of us even budged. It was our new normal.

Another crazy regional final matchup. In one corner, A.D.H.D., a song that communicates the plight of our generation: being simultaneously over-diagnosed and over-medicated, resulting in everyone deciding, “fuck thought.” In the other corner, HiiiiPower, where Kendrick introduces himself as an artist with smooth production and stylistic range.

The right song won. But at what cost? 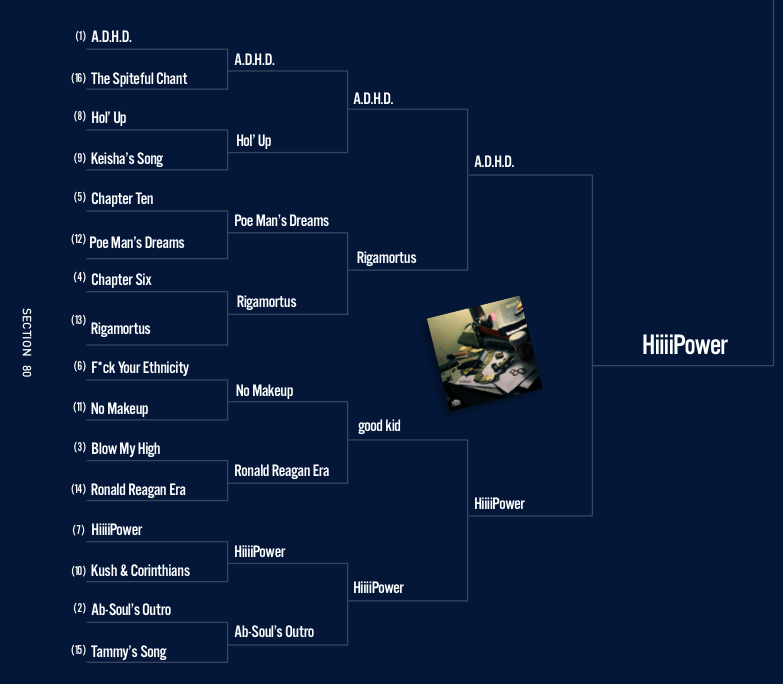 Punches Thrown: The To Pimp a Butterfly Region

First, a necessary disclaimer: To Pimp a Butterfly is a brand new album. It is days old. There is no conceivable way to correctly rank its songs. I’m months away from choosing my favorites. That being said, How Much a Dollar Cost is absolutely my favorite song on the album and it’s so completely unfair that it had to be eliminated this soon.

Listen, I recognize Mortal Man’s significance. It’s incredible. Hell, I voted for it. But How Much a Dollar Cost is a beautiful story, a poignant illustration of existentialism, and the hook is so freaking pleasant. Knocking it out had me banging my head against a wall.

Also, Wyatt voted for For Free? over u. C’mon Wyatt.

Much like in the good kid, m.A.A.d. city region, these four felt right. The Blacker the Berry is classic Kendrick being even more of a tornado than usual. Mortal Man is brilliantly inventive. i is the Grammy winner, and the album version is bolstered. And King Kunta is quintessential quirky Kendrick making social statements against yams. Maybe if we hadn’t hated each other by now we would’ve enjoyed this region more.

It should be noted that, at this point, Katelin had still neglected to listen to Mortal Man. Apparently, 12 minutes was “not worth [her] time” and, no matter what genius was within, i would be better, because it was shorter and far more appealing to her attention span. Thankfully, Wyatt and I took the time to listen to Mortal Man.

Katelin still hadn’t listened to Mortal Man, but Wyatt and I still had, and kinda-sorta waking 2Pac from the dead was enough to survive a strong push from The Yams. 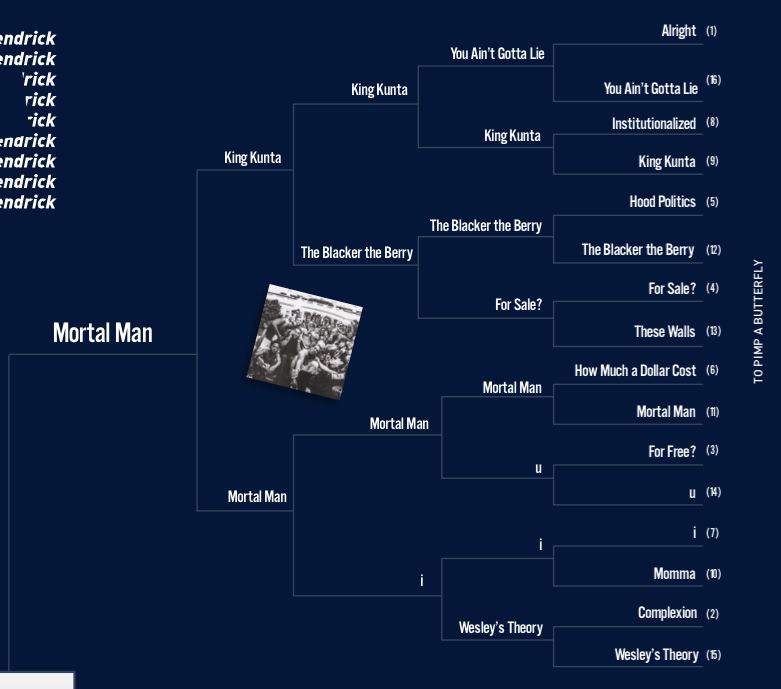 Utter Chaos: The Best of the Rest Region

Apparently we’re eliminating the greatest Grammy’s performance of all time (Radioactive), a flawless encapsulation of Kendrick’s childhood (Cartoon & Cereal), and a guest verse in which Lamar seamlessly transitions in and out of a different language (Collard Greens) all in the same round. Complete, utter mayhem. Predictably, turmoil followed. I screamed. Katelin cried. Wyatt hid. It was ugly.

How is P&P still here? This is ridiculous.

Umm, hi? Katelin and Wyatt? People I call my friends? Did we just put an unpolished Colbert Report performance ahead of the verse that put a halt on the rap game for a solid month? Ugh.

But here, I agree. Buried Alive is a compelling story. Kendrick is at the precipice of fame, wondering if he should accept its evils and dive in. He loves the fame, he’s addicted to it. But by accepting it, he’s selling his soul, so he asks everyone to bury him in the evils. Also, Katelin liked how it made her bop her head. 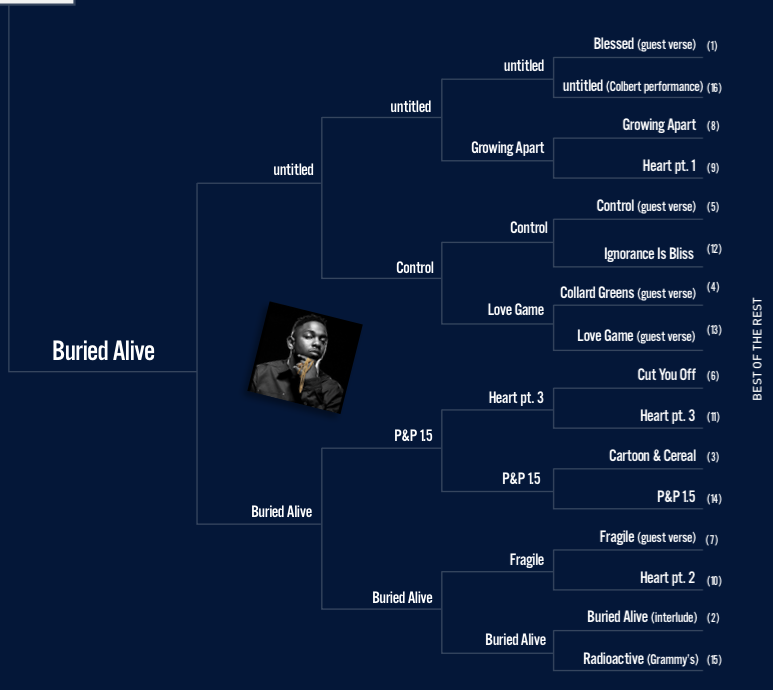 Cleaning Up Our Mess: The Final Four

HiiiiPoWeR def. Sing About Me, I’m Dying of Thirst, 2-1

(Shut up, nursing homes will be awesome by then).

I’m fine with this decision. I think everyone was. HiiiiPoWeR is early Kendrick laying down the stepping stones for his trajectory as an artist. He’s still making the same sounds; he’s still sending the same message. It’s his first great hit, and it will always be awesome. 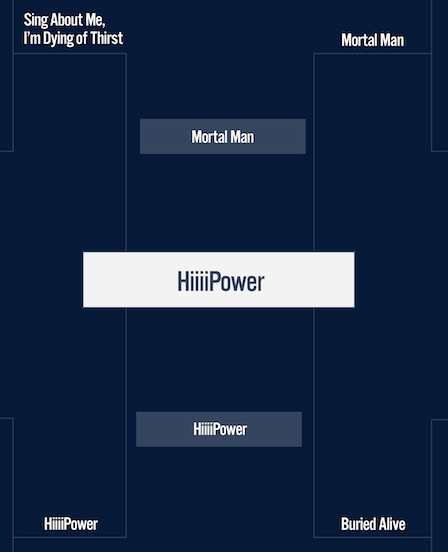 As we collectively apologized for our behavior and cleaned the apartment of everything we’d thrown, we all agreed that HiiiiPower was a fitting champion.

But. Was it worth it? Was any of this worth it?

I mean, we did it. We picked a winner. But we definitely aren’t friends anymore. We’re way too jaded now. It’s almost like we were caterpillars before all this started, safely secured in our cocoons. But the rigors of this process pimped us into— nah, I’m done. 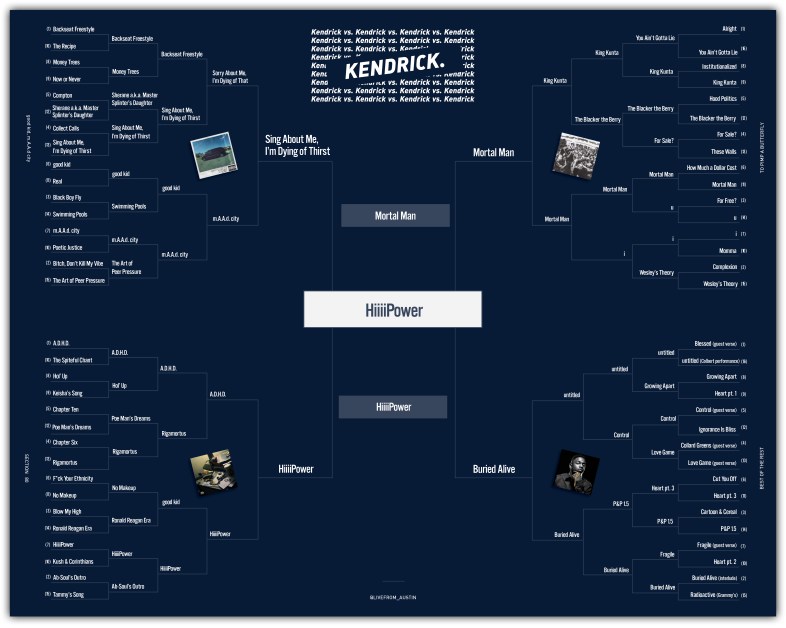 The 10 Best Throwback Rap Songs Of All Time