On the Things I Love About My Mom list, which, by the way, is quite lengthy, the way she talks is very high. Easily top five. I love the way my mom talks.

For what it’s worth, other top five items include her hair, the fact the she gave birth to and raised me, her love for dogs, and that she used to live in Germany.

Don’t ask me to rank them. I can’t in good conscience put used to live in Germany up against reared me. No way. They’re both so great. Don’t do that to me.

You might catch her on a long car ride, explaining, in-depth and at-length, the many and varied character dynamics existing within her book club. You also might catch her by the front door, waiting to corner you on your way out, making you unpreparedly discuss your love life, living situation, and career plans.

It’s impressive. And lately, I’ve taken to critically analyzing my mom’s communicative behavior, because it’s intriguing, and also my Communication Studies degree has to get some use.

Premise two: Now that I don’t spend as much time with my mom, it’s easier to view her speech patterns through an unbiased lens. When we’re catching up, I’m better able to examine the way she speaks: what she says, how she says it, the structure of her stories, etc.

Premise three: Recently, I have become aware of premise no. two, and my unbiased lens has turned into a microscope. I analyze everything my mom says. I am a master of her communicative trends.

She’s an excellent storyteller. Seriously. She understands which narration styles work, and which don’t, better than anyone I know. That’s what makes her so dangerous. 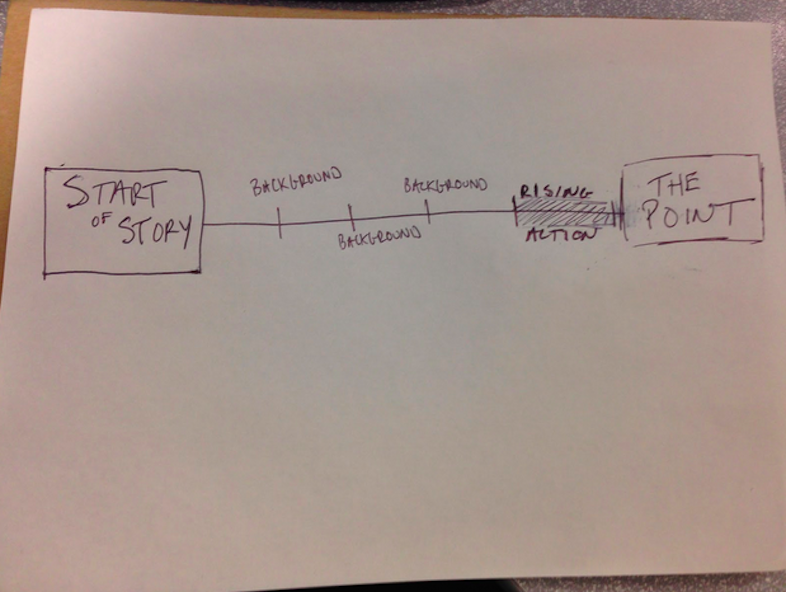 She begins, then builds, builds again, builds some more, and then boom, she hits you with the point. Textbook approach.

But like any Great, my mom can’t be flawless at all times. Even Jordan had off games.

So, with our aggregate conversations on the decline, it’s no surprise that her performance has taken a slight hit. Her general strategy remains the same: she builds suspense with circumstantial evidence, capturing your attention before staggering you with whatever the point may be. Except the circumstantial evidence portion has grown. Exponentially. Like, at least tenfold. And there’s no stopping it. She just overwhelms you with background info until you arrive at some sort of conversation oblivion, wherein there is no escape. You’re trapped. Trapped in background information. 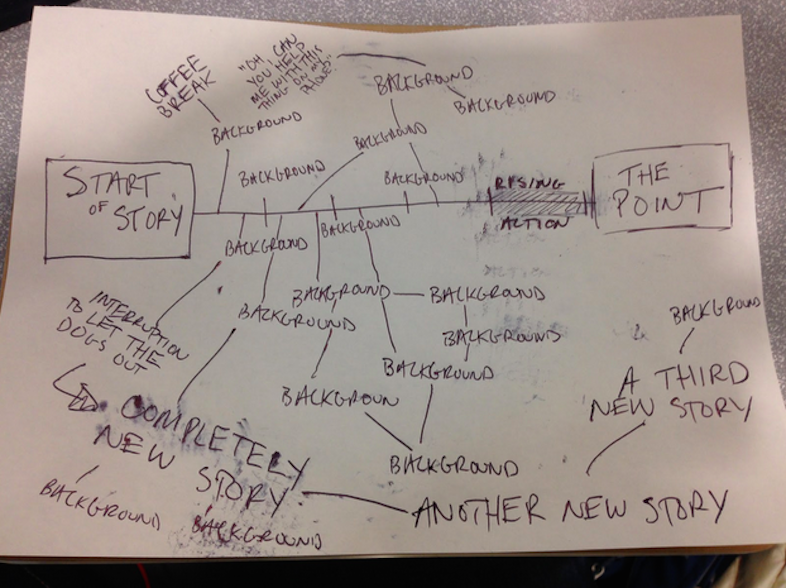 An example of my mom’s new storytelling approach at work:

Recently, she told me the gripping tale of her trip to Target. It was insane. She ran into like six people she knew, she was barely wearing any makeup, and it took her twice as long as it should have because everyone in the store was slow-moving, an ideology my mom is firmly against. Those are the three chief points of the story as I understand them: (1) ran into some peeps; (2) not cosmetically prepared; (3) others are slow. But here are some ancillary facts I picked up along our journey to the point: the quality of her frozen coffee beverage, the color of her fleece zip-up, the array of vehicle issues she had to endure, at which intersection there was unexpected traffic, how she knows every person she ran into, how she feels about every person she ran into, how she feels about the friends of every person she ran into, what the weather was like that day, which food item the dogs had recently gotten into, and so much more that I’ve since forgotten.

The following point can’t be emphasized enough: I love my mom for this. It genuinely is one of my favorite things about her. It helps us stay entirely connected despite not living together. Plus, the trait has passed down to me. It’s often how I communicate.

Which leads me to the point of this paper.

Conclusion: Every person should talk like my mom talks.

Think about how knowledgeable the world would be. Every piece of information — each seemingly trivial but possibly valuable fact — would be out on the table, ready to be digested and dealt with.

Would we be overwhelmed? Yeah, probably.

But it’s the ultimate form of transparency. And for that, my mom is a hero. That’s right. My mother is a crusader. A crusader in the name of forthrightness. And I love her for that.