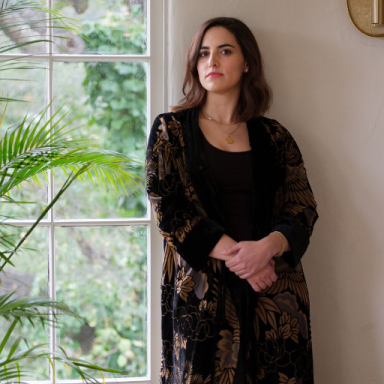 Girls who listen to music are terrifying. Or more so girls who take too much of an interest and build up a certain taste in music are terrifying. You know the ones. She’s got a playlist for every emotion she’s ever felt and enough favorite songs to create her own greatest hits….trilogy. She sees the world a little differently with her headphones turned all the way up. Daily encounters seem more meaningful when they’re set to a crescendo of sounds.

Playlists are her love language. She shows she cares by a list of carefully curated tunes with the recipient in mind. Every love she’s ever had has a soundtrack. Some of which are too painful for her to listen to but she turns them on when she needs to know she can still feel something.

She collects her favorite lyrics the way some people collect crystals or baseball cards. Writing them down so that she feels more connected to them, like she could have been their original writer because that’s what they feel like. But she feels like she needs to keep them close so that it’s apparent how much they mean to her. It’s not enough just to hear them in a song now and then, she wants them tattoed on her heart. She hears them on loop in her head as she goes through applicable life events. Like a 3rd date with the boy she knows is emotionally unavailable, “lovin you isn’t the right thing to do” who could possibly say it any better than Stevie?

Though she couldn’t play an instrument if her life depended on it, the way she feels a beat is like that of a senior composer. She’ll talk to you for hours about her favorite guitar riffs, solos, beat drops. Once again she’ll use feelings to describe what’s going on in the sound. Like how the lead guitar in Layla feels like that moment when you want something so badly but you know you’ll never have it. She’ll also tell you the outro is a lost art form, the way the song tapers off makes her feel like she’s floating down to a soft landing.

If you want to see her light up you ask her where her favorite jukebox is, because they all have one, and you take her there. You encourage her to be the DJ for an hour, she picks carefully. At the start of the first song you can see her glaze over watching the bar in anticipation. She needs to know that at least one person in the room is happier having heard that song. Music has never been much about her as it is about how she’s able to relate to other people.

I don't think Will Ferrell is funny....at all.