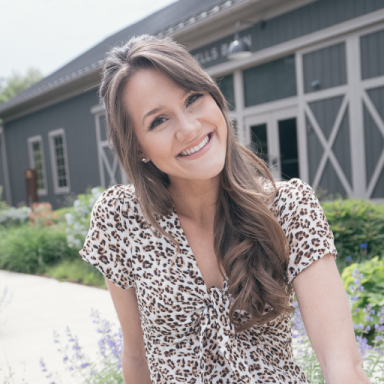 Instead of “being real”, I used to always pretend like everything was fine.

I was this happy, cheerful gal in public, who acted put together. But whenever I was alone, it was like I was a completely different person. My two different selves, the “perfect” one and the “real” one, were always at war with one another. When one showed up, the other one shut down.

I’d walk into places with a happy face, but you would never know I was struggling. I avoided authenticity for fear of judgment, for fear of losing the “perfect” perception I gave off. My perfect persona was my safe haven.

But it was so far from the truth.

I put on the mask of “perfect.”

This mask covered up a whole lot of issues. Especially in the hardest time of my life.

First, my boyfriend and I broke up (we dated for 3 and a half years). Then, my parents got a divorce. And then a week later, my grandma died.

This all happened in a very short amount of time, and I felt completely out of control.

Yet, I still showed up with a smile on my face. I still acted like things were okay in front of my friends, teachers, and even family. But behind closed doors, I was headed down a straight path to self-destruction.

I went out almost every night and numbed my feelings with alcohol. Additionally, I didn’t respect myself with men, gave myself away and felt incredibly insecure. And frequently I criticized my body and started to count calories. I did all of this to cope with everything that was going on in my life – and it did nothing to help me. And so my life was a flat out mess.

But I would never admit it.

I would never admit that my life was a mess.

Until, I had no more energy to put on the persona anymore. I started to realize if I never was honest about how I was struggling, it would never get better.

My mom was the first person I opened up to. And then, I went to a therapist. I also started to open up to my closest friends, I mean really open up.

Though I was terrified of judgment, I was met with nothing but love.

Sharing my struggles helped me realize that my behavior was unhealthy – and it pointed me to healing. Through wise counsel, I found better coping mechanisms, like prayer, self-care, and ice cream.

But I doubt I would have experienced this kind of breakthrough without opening up.

Along with being vulnerable with people, part of me being real is sharing this on the Internet. Because all of us are going to go through things. And we are going to cope accordingly. And we are going to learn. If you can learn a little bit and feel more freedom from reading my story, then the vulnerability is certainly worth it.

God has told me recently how he put a genuine heart in me. Synonyms for genuine are real and authentic. It means to “be exactly as it is said to be”, or to be sincere. I think deep down, we all can be genuine, we all can be real. And I don’t know about you, but I want to tap into this genuine heart I have. Being fake is going to cut it anymore.

Fake is not going to cut it anymore.

Hiding our problems never healed them. But being open and honest about what we are facing, even if it’s ugly, is when we experience true breakthrough.

So maybe you’re in that space right now, where you feel as fake as a Barbie doll. Maybe you fear people will leave you if they really knew what was going on. Maybe you put on the mask as a shield of self-protection.

So let’s start being real.

I dare you to take off the mask. It doesn’t have to be with the whole world. Maybe it can be with one person, your bestie. Or a therapist, or a parent, or even God. Just be honest with where you are at.

When you show up as who you are, the right people will stay. And God will certainly still love us, because it’s His job.

After you are brave enough to be real, I want you to be surprised at how free you feel. How much lighter. How much relief. That relief is certainly worth it.

So, be brave enough to take off the mask. Be real. After all, authenticity trumps perfection any day.

Making your life a little sweeter through words. IG: @thehoneyscoop Follow Ashley on Instagram or read more articles from Ashley on Thought Catalog.

45 Things I Learned From Keeping A Journal