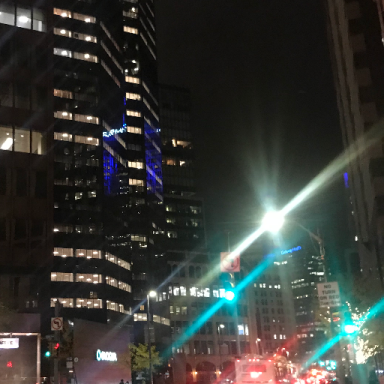 We won’t discuss my age, somewhere between fifteen and twenty-five, but the fermented beverage rolled from the can to my lips, my tongue, and so forth down to my esophagus and abdominal. It had a virulent taste like Pepsi; however, I knew its contents were completely different and far more daring. I’ve always been a wine girl—red or white, usually during Thanksgiving at my maternal grandparents 1970s style house around the ovular wood table toasting to another year.

My beau came to visit me for the first time in forty-two long and never-ending days. Even with forty-two days worth of text messages, phone calls, and even a FaceTime video chat once, it never replaced my desire for his touch, which relaxed my rigid boney muscles and my anxiety-filled, already too attached to him and our future, heart.

We got lunch in the town center and planned to adventure into the deciduous woods that fill the landscape of my socioeconomic mess of a neighborhood. He will never truly admit it, but he knows we are classes apart. I’m the proletariat branch public school peasant to his private Times 28th best in the world ranking bourgeois school and childhood. He’s been to Hawaii several times and I’ve barely tackled any state that does not geographically touch Pennsylvania. Still, somehow he likes me.

He bought a twenty-four-pack at the all-in-one shop next to the ice cream store on Scalp and we went into the woods. Nature surrounded us as we stood in the unstable treehouse formed of twigs and branches until he threw a can landing in the muddy grass ruining the pure environment.

“Four down, twenty to go. It’s Spring Break, live a little.” He said handing me a can for myself. I hesitated thinking about my unfermented beverages other than wine life so far, those who had one sip too many or too many sips too many, more than eighty-eight thousand Americans in the past nine years, and the chances of my parents who cherish me as their pride and joy only child, who I happen to live with, smelling the .02 or more percent of it on my breathe.

My beau stood there in the treehouse, can and hand still out for my taking. I didn’t really know how to drink. Was it like little sips at a time with pinkies out like my experience with wine or how Patrick Star drinks bubbles on SpongeBob? Was it all at once like a shot my parents do at bar dances while they sing along to Old Time Rock and Roll? Was it a chug like the one I’ve heard about happening too many times at my own college’s Frats that sometimes cost students more than their education and clean record? Was it like Pepsi again and you just drank it like a normal drink in a can or were there rules?

Though my fifteen to twenty-five-some years of life had taught me a lot, I never learned if there were rules on how to drink beer. I knew what the consequences were of drinking; that was something I was always pressured to remember. I knew how to say no to beer; I might have even said no to my beau’s offer. I knew a lot about this favorite past time for Americans and how countless people enjoyed drinking around the world. Yet, I never tried it for myself; I never experienced the experience of drinking beer, let alone how to drink. I only watched others do it.

How had I been so unknowledgeable? I was old enough to drive my dodge neon stratus to the gas station, old enough to buy cancerous Marlboro cigarettes, and old enough to buy Pennsylvania scratch cards to waste away that gas money to even go to the station. I should have known how to drink a beer. It wasn’t like it was my first time in front of it, face-to-face within lip distance to alcohol. I drank wine. What’s the difference? A huge one.

It felt as if minutes had passed as I stood there surrounded by the woods still just looking at my beau’s hand and the can out in my reach. I think he knew, he knew I wasn’t sure what I was doing, but like most times, he just stood there letting me have my moment of external silence and internal chaos in search of a decision. He knew I drank wine, but he knew nothing more or nothing less of my fermented beverage history. He had no idea that this was the first time, or at least could be. He probably just thought I wanted to be the classy lady he thought of me as, the wine girl; however, class had nothing to do with my hesitation.

It had only been about ten seconds from when he gave me the ultimatum of “live a little” for these questions and contemplations to shaking glide throughout my brain causing my internal chaos. I was the innocent bystander to his “four down, twenty to go,” but now I had the chance, the chance at firsthand, my first hand at beer.

Would it be like my first time driving my dodge neon stratus, leaning more to the right side the road and pressing the brake pedal a little too often, causing my mother to shriek and question the revocation of my license? Would it be like the day I turned into an adult by law having the ability to buy cancer in a cart and also to that penny scraping silver material off the sweepstakes paper called gambling?

What would beer be like? I didn’t know, but this was my chance to know. It was in the woods, my parents weren’t around; they couldn’t stop their pride and joy. The odds of me being one of those who had one sip too many or too many sips too many were highly unlikely. It was only eight ounces.

I took the can. I sniffed the beer. I examined its shiny silver design with the little blue mountain logo and decided to chug. I still wasn’t sure if chugging was the proper way, or rule to drink beer, let alone if there was a correct way, but it was my way. The fermented beverage fizzed, vibrating everywhere in my now tainted mouth. It definitely didn’t taste like wine and that definitely wasn’t a bad thing. I chugged again. I chugged some more. I finished the can.

I’m humble with a little fumble.