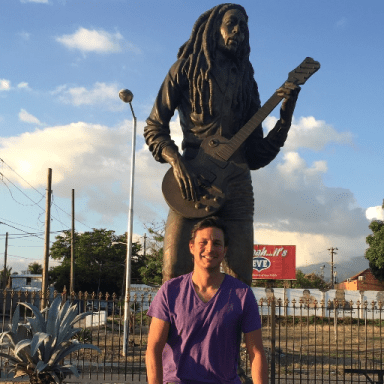 Simple advice from the band Metallica. Yet I couldn’t follow it.

There really should be only two simple steps in getting to sleep: turning off the light and closing your eyes. Yet, as I lie awake every night, tossing and turning, admonishing myself, disturbing my partner, and wishing for the morning, it’s clear that those two steps—and the 50 others I had added to my sleep routine—weren’t working.

I know I need eight hours of sleep a day. Sleep is good for the body; you can’t function without sleep. I know all the facts.

Welcome to the world of insomnia.

Insomnia can lead to many things—obviously tiredness, but also anxiety, depression, and more. It’s a worrying sign that when I google insomnia, the second suggestion that pops up is “Can insomnia kill you?” Thanks, Google, for the reassuring words.

Sheep trial #1: Counting is tedious but doesn’t make you sleep

“Have you tried counting sheep?”

Seriously, that’s the first bit of advice I received. Counting sheep. Isn’t that an old wives’ tale? I tried it. I got up to Sheep Number Infinity. I completed the Final Level of Sheep Counting. It was a baaaaaad idea, much like that joke.

My insomnia nightmare began eight years ago. I had started a new business, and stress levels were at a peak. With work covering several time zones, I was glued to my phone and checking emails at all hours.

The minute I woke up, I would reach for my phone and start checking emails. Before turning off my phone at night, I would check emails. Even in the middle of the night, I’d jump onto emails.

The iPhone was controlling my sleep, and I needed to remove it. I was addicted, and my sleep was suffering.

Sheep trial #3: When you need an Excel spreadsheet to manage your routine, it’s too much

The phone was the leading cause of sleep disruption. Googling for solutions (and quickly scrolling past the “Can insomnia kill you?”) suggested establishing a routine was essential. I needed a process that said to my brain, “Brain, Ash is going to go to sleep soon, let’s shut this thing down.”

Babies have a routine. There are hundreds of books about getting babies into a routine for good sleep patterns. My new Man Baby Sleep Routine started 90 minutes before bedtime: Shower, no electronics, reading a book, in bed by 9:30 p.m., time to wind down.

There were so many steps in my routine, I needed a Project Manager to guide me through it. But still sleep evaded me.

The next step was taking tablets. I tried prescription sleeping tablets—these would knock me out for the night, but the next day I felt like I had done 10 rounds with Mike Tyson. I would awake feeling like I was jet-lagged.

Avoiding big Pharma, I turned to Mother Nature and her array of natural herbal remedies. Valerian. Melatonin. Lavender. Chloroform. Well, not the last one, but it was tempting. With my vast supply, I was the Pablo Escobar of Herbal tablets. I was popping all sorts of pills (they’re natural—they can’t hurt!) trying to strike a combination that worked. None did.

Next on the hit list were physical remedies. The Chinese and Google had a few that were recommended, so I put my body to the test.

Acupuncture—being a human pin cushion wasn’t as painful as it looks. It also wasn’t helpful.

Cupping—using suction to make my bad non-sleepy blood flow better is supposed to be relaxing and assist sleep. I would emerge from these sessions with a chessboard pattern across my body. These served as a reminder for another failed experiment.

Flotation—lying in a sensory deprivation tank is a way to calm the mind. This would work for the hour I floated in a claustrophobic tank, but as soon I reentered the world of senses, the brain kicked into overdrive and I was awake as usual.

I quickly decided to end my foray into alternative healing.

Sheep trials #204 to #398: When your bedroom is like a sharper image showroom

The master advertisers on the internet spying on my Google searches started filling my social feed with ads for products that promised “The Best Sleep You’ve Ever Had!!!!” And much like the bored late-night TV viewer mindlessly buying an Ab Burner 1000 on the Home Shopping Network, I started collecting these products.

The Calming Blanket is designed to recreate your mother’s womb. I don’t know if that is comforting or frightening. Weighing 44 pounds, the blanket restricted my movements. I felt like I was wrestling (unsuccessfully) a heavyweight champion and being pinned down for a count of 1000.

Next up were the Soothing Sleep Machines. I found one that had a soft red light that gradually dimmed while playing ocean noises. It was like Enya was in my bedroom. It did assist in getting me to sleep, but at 2 a.m., when my brain was jolted into action and my slumber ended, it was ineffective. Next.

The Sleep Mask 5.0 (or some such name) was a super thick mask that covered most of my face. Useful for robbing banks but less so for sleep.

There was also a wide range of apps that were recommended to me. Calm. Headspace. Go the Fuck to Sleep.

I had more gadgets and technology in my bedroom than NASA. Houston, we have a problem—none are working.

My final step was to spend a week at a health and wellness retreat. With a focus on nutrition, fitness, and mental health, my primary goal was to get an even more personalized sleep program for myself. I booked a session with a sleep coach. This is a fascinating career choice, in my opinion. “okay, team, we’ve worked and trained for this. On the count of 3, let’s sleep. 1, 2… zzzzz.”

Hundreds of ideas were tossed around. Ice cold showers before bed. Meditation. Deep stretching. Magnesium Bisglycinate—this last one was said to be the most effective. Something that difficult to pronounce had to be.

I tried all of these. Yet even in the peaceful surroundings of Phuket, Thailand, my mind would still wander at night. On the last night, I met another guest whose mother was a sleep coach in the UK.

“Have you tried sour cherry juice?” she asked. At first, I thought she was having me on, but she assured me, “It works. All the time.”

Upon my return, I went to find magnesium glycinate. No stores in Melbourne had them, but I found a US store and ordered some.

Like a child the night before Christmas (excited and sleepless), I waited for my package to arrive. When it did, I eagerly had a dose and almost spat it out. Bisglycinate may be an excellent word for Scrabble, but it tasted awful. I waited expectantly for the results, but with all the added pressure, I couldn’t sleep.

Two weeks passed. I forced myself to take this awful magnesium, drink cherry juice, and meditate/stretch/take cold showers. Eventually, I decided to combine the magnesium and the cherry juice like a mad scientist. Lo and behold, this led to my perfect sleep formula!

I managed to sleep through the night like a baby whose parents followed a routine, and it worked.

Eight years and 5003 sheep later, I was able to sleep!

Insomnia can be a debilitating condition. It’s like being jet-lagged 100% of the time. I tried many solutions, and in the end, a relatively simple one seemed to work.

Maybe my brain had given in and even a placebo would’ve worked. Perhaps, for some strange reason, cherry and magnesium combine to have a powerful effect on me. I don’t believe there is one solution for all people.

I had a lot of people GUARANTEE that doing X will work. It never did. But I do believe that there is one solution that will work for everyone.

You may be lucky, and the Original Solution—counting sheep—will work for you. It could be a hot cup of chamomile tea or a meditation app.

Just like finding that one fish in the sea to become your partner, there is one sheep out there for all insomniacs. I hope you can find your Cherry and Magnesium.

“Take my hand. We’re off to never-never land.”

Thanks Metallica. I will.

I’ve been to 105 countries, and I’m allowed back to many of them

The Key To A Productive Morning Starts The Night Before