Skip to content
Report This Article
What is the issue?
Doing the math to find out if the health insurance marketplace is a ripoff.

In September of this year my girlfriend Angela left her job at a large corporation for a position with a start-up. In many ways it was the change she needed: The work is more interesting, the pay is better, the team is closer. The only drawback was that she lost her health insurance. Being a small company with limited resources, Angela’s new employer isn’t legally obligated to give her insurance, so she skated by uninsured for a month, hoping that my job — which wasn’t offering me health insurance at the time either — would begin to. Instead, I got laid off. Womp, womp, wooooomp.

While I signed up for unemployment and Medicaid for myself, I also began looking into the options available for my gainfully employed girlfriend. I browsed New York State of Health, our state health insurance marketplace that was established as part of the Patient Protection and Affordable Care Act, also known as ObamaCare. Rather than blindly enrolling for one of the plans offered there, I used my ample free time to attempt to answer the question: Is health insurance even worth it?

If you’re somebody’s mother, the answer to that question may seem pretty straightforward — something along the lines of “Of course you need health insurance; what’re you going to do when you’re listening to your MTV and drinking your Tang and break your leg rollerblading?” — but it’s not that simple.

First of all, no one drinks Tang anymore. More importantly, there’s an entire level of insurance dedicated to just that kind of scenario: the poorly named “catastrophic insurance.” For between $100 to $200 a month, catastrophic insurance ensures that if you get cancer, you will not suddenly become bankrupt as well… hopefully. The thinking behind it is that if you get a money-hungry condition like cancer, you will very quickly eat through your $6,600 deductible — the amount you have to cover before insurance starts paying for everything.

Catastrophic insurance also covers a few visits to the doctor and some preventative services, but it’s mostly just a hedge against god’s wanton cruelties. If you want any type of regular health care, whether that’s gynecologist visits or penis pills, this is probably not the insurance for you. So rather than starting from a position of fear (“What if I do break my leg?”), we began with the basics.

Around the same time I was looking into health insurance for Angela, my younger brother also switched jobs. Rather than offering him a slew of sponsored plans to pick from, his new employer gave him a stipend to cover his independent purchase — meaning he too had to head to New York State of Health in search of a plan.

My brother is the kind of 26-year-old who plays the stock market, which is to say he’s constantly looking to maximize his returns. So even though he’s pretty healthy and rarely goes to the doctor, he wanted to be sure he was getting the most health care he could get for his (or his boss’s) dollar. The challenge was that he didn’t have any criteria to easily exclude plans; without a doctor he was committed to seeing, for example, he wasn’t able to automatically exclude those plans under which his doctor would be out of network. This left him with dozens if not hundreds of options, and it seemed impossible to judge the merit of each. (New York State of Health includes zero-to-five-star ratings for each plan, but the methodology behind them is murky so they’re basically useless.)

Thankfully Angela had her criteria. A dentaphobe who needs two wisdom teeth removed and two onlays redone, she will only see her childhood dentist and the oral surgeon he has recommended (and even then with trepidation). She also wants to continue taking her particular birth control pills, though doesn’t seem to care much for her gynecologist. Either way, that’s enough to start working with.

Before we dive into it, let me explain the first column of the chart below, “Health Care Needs”: These are the health care expenses we know Angela’s going to rack up in 2015. They include 12 months worth of birth control, two visits to the OBGYN for birth control prescriptions, two wisdom teeth removals, two teeth cleanings, two onlays, the mandate penalty (the fee you’re charged by the federal government if you don’t have health insurance), and 12 months worth of health insurance premiums (if she chooses to buy insurance). There is also a row for the totals of the other columns.

You’ll notice the chart doesn’t include anything routine-yet-skippable, like an annual physical, or anything incidental, like flu medicine. That’s not to say that Angela will be skipping her physical or that we’re magically 100 percent sure she won’t catch the flu next year; we’re just trying to nail down the expenditures that are definitely going to happen. We’re creating a baseline so we can gauge the situation from a perspective of need, rather than obligation or fear.

What’s also missing is the deductible for each plan. Floating between $3,000 and $600, the deductibles decrease as premiums increase. In Angela’s case we can mostly just ignore them because her total health care costs won’t reach those amounts — except under the MetroPlus Gold plan, which has a $600 deductible. In that case, after she spends $600, MetroPlus Gold will cover the rest, effectively knocking $470 off her total spending.

As for the other columns, they should be self explanatory: After “Health Care Needs” we have “Out-of-Pocket Costs,” which lists the price of each need without insurance, followed by five more columns, each of which includes prices from different insurance plans. These particular plans were picked because they include dental, which makes up Angela’s largest costs, because they are priced competitively and because together they offer a spread from “bronze” to “gold.” (“Catastrophic” isn’t included for aforementioned reasons — that is, it’s sort of shitty.)

What may be less obvious is where all of these numbers came from. While all of the figures for the insurance plans can be culled from New York State of Health and the insurers’ respective websites, the out-of-pocket costs were obtained through calls to Angela’s pharmacist (birth control), OB-GYN (visits), oral surgeon (wisdom teeth removals) and dentist (teeth cleanings, onlays), while the mandate penalty was just googled. All estimates were taken at their highest possible cost, making the calculations “worst possible scenarios” of sorts.

The chart is also color-coded: “Out-of-Pocket Costs,” our baseline of not buying any insurance at all, is yellow. Other cells are red (higher cost) or green (lower cost) in relation to the yellow ones. 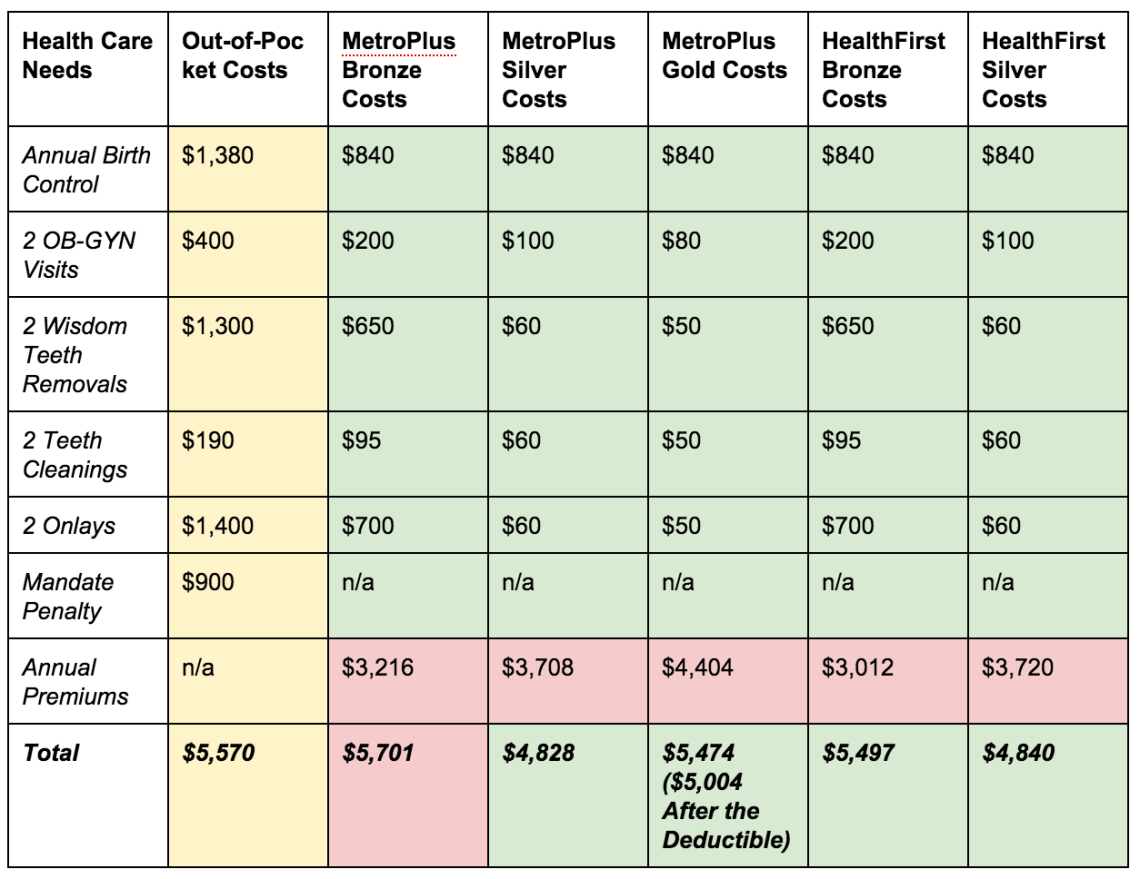 Alright, so what the hell does all of this add up to?

1. Even a quick glance at the chart above conveys that everything from birth control to onlays are cheaper if you have insurance. That’s because even if insurance isn’t covering those costs, insurers leverage their size to get lower prices from doctors, pharmacies, dentists, etc. — lower prices that actually do get passed on to you.

2. As you pay more in premiums (roughly denoted by moving up from “bronze” to “silver” to “gold” levels), insurers pick up more of your tab. That’s why an OB-GYN visit is $200 at the bronze level and only $50 at gold.

3. The biggest savings are in the jump from bronze to silver. You save a bit more on procedures at gold, but most of that higher premium is going into reducing your deductible, which isn’t really worth it if you’re not a hypochondriac (or, you know, legitimately ill).

4. Premiums suck, yet all of the insurance plans but one (MetroPlus Bronze with its too high premium) are actually cheaper than not buying insurance.

5. Even if you exclude the hated mandate penalty, the MetroPlus Silver plan still comes out to just $158 more than not having any insurance at all.

Of the plans that are cheaper than paying for everything out of pocket, MetroPlus Silver is the best deal for Angela based on its total cost. That being the case, I made two more quick calls to her dentist and oral surgeon to ensure they accepted it and signed her up. Voila. Simple.

In case it wasn’t obvious from my earlier admission of being jobless, I don’t work for a health insurance company nor the government, nor have I ever. (I onced canvassed for Jon Corzine but that was just for the money and I did very little actual work. Fuck that guy.)

I started looking into all of this because I thought that, like car insurance, health insurance was bullshit — essentially a tax placed on people through fear and coercion. After going through the numbers, I understand that, at least in the loopy world of American health care, health insurance can be a good resource for some people. Yet if I didn’t have insurance, I probably wouldn’t buy it; as a relatively young guy who never goes to the doctor nor takes any medication, my actual needs just don’t justify the cost.

Until I find myself in that position, though, I’ll just enjoy my sweet, sweet Medicaid.

This Is What It’s Really Like To Live On Medicaid

12 Self-Care Acts That Are Difficult But Life-Changing