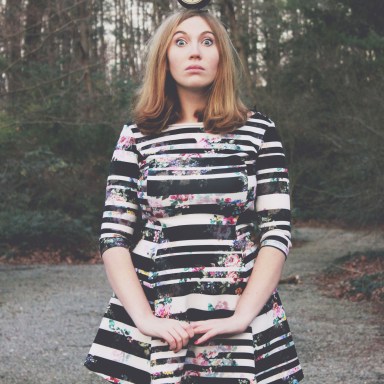 There’s a lot of preparation involved in heading off to college for the first time. Some of us finally go with our moms to Bed Bath & Beyond. Others change their Facebook profiles to nicknames our home friends wouldn’t understand.

I found myself streaming every rom-com on Netflix, rereading Mindy Kaling’s book and picking out dresses for dates yet to be planned.

I didn’t come to school to learn; I came to fall in love.

At 17, I was ready for my storybook ending.

Instead I’m here, talking to a guy. Not a cute or nice one, but yet we’ve still managed to hook up. It’s my first semester of college, and I can’t stand the idea of putting out for someone who actually doesn’t give a shit about me.

I try to get him to stay, or at least ask me to.

He says to me, “Why do you want to be in a relationship so badly?”

I respond, “Maybe I’m trying to prove not every guy is my father.”

I don’t know why or where this response came from, but I can’t forget what he said next:

“You know, if you want a guy to stay, you really shouldn’t bring up your daddy issues.”

He spoke to a label, a box I never knew I was inside. I was trapped, and there was not a happy ending in sight.

My fairytale ending had a daddy issues clause, and as long as people could seal me beneath this cardboard, I would never fit the bill.

I tried to claw outside, rip the duct tape apart, but years later, I’m still boxed in. In the moment, I brushed off his sentence like dust on my shoulder, but somehow it stained. Somehow this sentence ripples through my brain and this stupid boy is still here, dropping pebbles in my cranium.

Before that moment, I’d never thought I had daddy issues.

That’s not to say I had a Disneyland dad. When I was 2, my mother fled my father’s fist. Until I was 10, he never called, wrote or cared. He had months of brief visitation with my sister and me, where he was physically abusive. Then he just stopped showing up on Wednesdays.

I’d seen the girl with daddy issues on TV, but never in the mirror.

She was the prostitute, the drug addict, the chick who couldn’t get the bad guys to stay and begged the good ones to leave. She’s more crazy than bitch, less train than wreck. Everywhere you look, from movies, to books, to Hollywood, the girl without a dad is a slut, a liar, a failure.

I was on a full scholarship to the most competitive program in my field. There wasn’t a rebellious reputation to be seen for miles. I hadn’t even slept with the boy telling me I was fucked up. I’d spent my entire life trying to defy what the world commanded me to be.

I wasn’t the stereotype.

But as a woman, I was a commodity, and as a survivor of domestic violence, apparently I was damaged goods.

This was not the first time I was prescribed a dose of silence.

In elementary school, I told everyone my daddy had died of a heart attack. It was easier than saying I knew his fist better than his face. I was taught to be ashamed of who I was and what I came from. But when he started showing up in class, my chance of being the poor girl without a father evolved into Daddy issues.

When I was in 10th grade, I first opened up about my experience. I wrote and presented a speech advocating for children’s rights in the face of abuse throughout the Northeast. It was a conversation no one was having, but I had the chance to start it.

People started to respond, to validate my story and share theirs. For the first time, I felt like a survivor instead of a victim. Speaking up about my trauma gave me the opportunity to be constructive about it. The courage I fostered to tell my story became the thing I loved the most about myself.

And here I was, with a boy I trusted, who told me to staple it down.

He told me to wear my life story with like a crimson A.

My experience — just like all the girls whose fathers were the first men to leave them — is complex. It has ridges and laughs and fires, but too many men reduce it into a simple phrase. My autobiography in his mouth was two words: daddy issues. If I wanted a guy to stay, I had to be ashamed of them.

Two years later, I’ve realized I don’t want a guy to stay; I want a man.

If you’re not ready for a woman with a galaxy inside her, then go ahead and leave.

Mama’s boys get to play the comedic hero, while girls with daddy issues get saved. So, I’m saving myself. I’m done being anchored by sexist bullshit. I’m not ashamed of my father. He should be ashamed of himself.

I’m proud of where I come from.

I come from a mother who fed me matches so there’d be a fire in my stomach. I come from cookies, cuddles and happy endings.

I come from the promise that I deserve mine.

Ariel Sobel is the Head of International Youth Engagement for Kids Change the World, a competitor on Southern ...