I don’t like bras. I understand they serve some sort of purpose. There are women who feel more comfortable wearing them, and I 100% support that. It’s all about what makes you feel the best. Forget what anyone else has to say.

And who knows? Maybe my opinion would change if it hurt when I walked around all #FreeTheNipple. My boobs are fairly small, so I don’t need a lot anchoring me down. I can lightly jog and it doesn’t hurt. Actually, I have to actively TRY to get my boobs to move. Like jumping jacks, running in place, freestyle dancing. It’s almost a challenge. What can I attempt today to see if my boobs will jiggle? 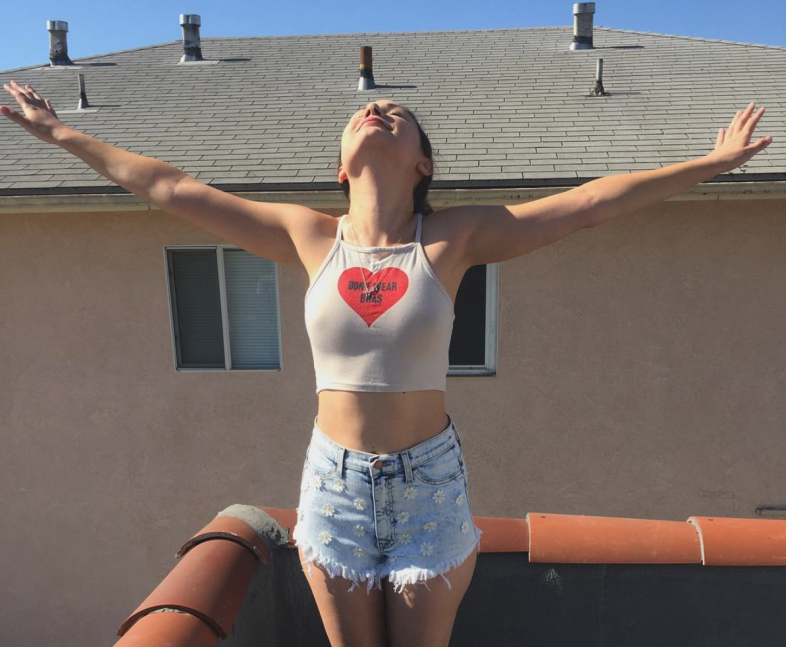 Because my lovely lady lumps are on the petite side, I stopped regularly wearing bras about two years ago. I literally own ONE bra that fits. And I can’t even remember the last time I donned it. Basically, when you’re with me, you don’t need to check the weather. Look at my chest. My nipples will let you know if there’s a breeze in the air.

It’s now such a part of my day-to-day life that I never think of it as weird or taboo. It took me 24 years to decide to love my body, and that’s a whole lot earlier than some people.

I spent my adolescent years, as one does, hating every inch of myself. My boobs were too small. My hips were too wide. My teeth were weird. I found a problem in every body part.

You know what? Hating yourself gets exhausting.

I started loving myself instead. It’s easier said than done, but after a while, it became routine. It was a habit, to love myself.

And now, I love my body. I think it’s beautifully imperfect and absolutely mine. I don’t wear bras! My boobs are pointy and if I’m wearing a white shirt, you can see just how large my areolas are. Those babes are BIG. Seriously.

It didn’t even occur to me that the old lady glaring at me in the grocery store could possibly be upset with my choice to ditch a bra. I thought it might just be how her face looked, I’m not going to judge. So I continued along, grabbing two avocados and putting them in my basket.

She kept staring. I was starting to be aware of it. You know that feeling when someone is looking at you and suddenly you are rethinking every single thing? Do I have boogers? Did I forget pants? Is my hair on fire? The options were endless. And she just kept giving me her best Old Lady Resting Bitch Face.

I wasn’t going to say anything, mostly because I’m super passive. I looked away and started walking to the next aisle. But she followed me and tapped me on the shoulder.

NOW, SHIT WAS WEIRD. WHAT WAS GOING TO HAPPEN? WAS I HER LONG LOST GRANDDAUGHTER OR SOMETHING? I didn’t know.

She cleared her throat, a smoker’s voice emerged. “You know young lady, it’s inappropriate to go without proper undergarments.”

I was stunned. I looked down. I thought maybe I forgot to wear underwear and my vagina was playing peek-a-boo. That, I could understand being a little off putting. Even though I’m pretty sure my vagina is adorable, as far as vaginas go.

But nope. She was pissed that I wasn’t wearing a bra. She was upset that she could see my nipples, you know, those things that might feed my future child one day.

I honestly was so taken aback, I didn’t even say anything. I think I mumbled. Probably stared. Walked away and pulled out my phone, immediately texting the first person I could think of.

There are so many things I should have told her. But instead, I kept not wearing bras.

Because fuck an old lady who tries to tell me otherwise.