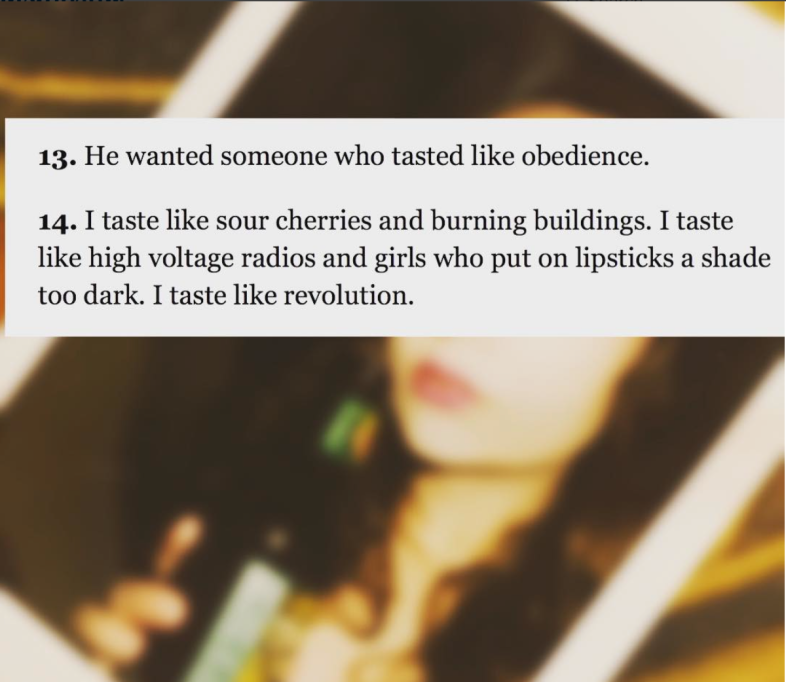 3. We never drank together, but we got intoxicated from counting our ghosts. He said mine somehow meant more than his did. He could see my past lovers at the foot of the bed. But I only saw him.

4. I wanted someone to love me unconditionally. I couldn’t haggle other terms very well. Nobody taught me how.

5. He asked who I would let fall from a cliff: my mother or him. I didn’t answer.

6. Because he wouldn’t have liked my answer.

7. Once, I told him I wanted to make the world better from laughter. He laughed. But it wasn’t the good kind.

8. I became so convinced an Earthquake would hit our sleepy suburb, it was all I could think of. I had us pack emergency kits in cars as I studied ways to survive the impending doom. Triangle of safety, pristine white boxes of first aid, collected chaos everywhere. I was so obsessed with natural disasters, I forgot to look at the destruction in front of us.

9. He asked if I would spend the night. I told him I couldn’t.

15. He told me girls like me spoke with too much volume.

16. I told him men shouldn’t fear being in the shadow of a woman.

17. He said I loved the world too loudly.

18. I was allergic to all his favorite things.

19. He kissed me like he was going away to war. He kept fighting, even when I threw up my white flags.

20. When I finally told him I was done, he said I was a grenade he needed to feel. So I let it keep happening. I didn’t know how to tell the difference between explosion and self-detonation.