One of my best friends is a kid in elementary school. And if I just ended my whole post there, it would have sounded way too stranger with candy, so let me continue. Her name is Kaitlin, she’s got beautiful baby-blue saucer sized eyes, a sprinkling of freckles across her nose and cheeks, and has an undying love for reptiles. She’s my sister and I could write about her endlessly.

I was always an only child growing up, so officially inheriting her a year ago as part of my family has been such a treat. Sure, it’s not always roses and pleasant Pokemon conversations (actually, anyone realize how messed up that show was? Capturing animals and forcing them to fight one another? UH OK) — but gaining a sister and witnessing her growing up has been one of my favorite things. Ever.

And, though I might be a bit biased, she’s probably one of the funniest human beings I’ve ever encountered.

watching harry potter and my little sister says, “I wish this one was called Harry Potter And His Big Ol’ Butt”

I’m 23 and Kaitlin is going into 4th grade, so you could say we’re at slightly different stages in life. I date. She still thinks boys are generally pretty annoying. But that doesn’t stop her from having an opinion on my love life. She recently very generously mapped out an entire plan for me on how to meet and snag the right guy.

I think this is just solid life advice, quite honestly. When I pressed her a little on what she meant, she almost rolled her eyes. Like, really? Ari, it’s so damn simple. Puhlease.

“You want to be nice to him, but that doesn’t mean he can be mean to you. If he is mean to you, you don’t have to still be nice.”

2. Learn about what he likes, unless it is hunting.

Not that you should ever abandon your interests, but learn about what he likes!

“If it is hunting,” she instructed, “You have to break up with him because I don’t want dead animals for Christmas or my birthday.”

I tried to get a little wiggle room on this because making out is one of my favorite activities to do with another human being, but alas, she insisted.

“It looks gross. And you will get germs. Only do it on special occasions.”

I mean, she’s not wrong. Swapping spit is a huge germ party, but…but…it’s so fun…

4. You don’t have to make them sandwiches, but maybe offer to buy lunch every now and then.

There’s something inherently feminist about this sentence that I’m obsessed with. That’s right. Sometimes, he’ll be in charge of lunch. Sometimes, you will be. EATING DONE RIGHT!

5. Don’t waste time if they don’t like you. There are more.

IF THERE IS ANY ADVICE I WISH I COULD TATTOO ON MY BODY, UM, THIS. I ended things with a guy about a week before Valentine’s Day and was being a Debbie Downer. So Kaitlin, my wise lil’ angel, gave me this. 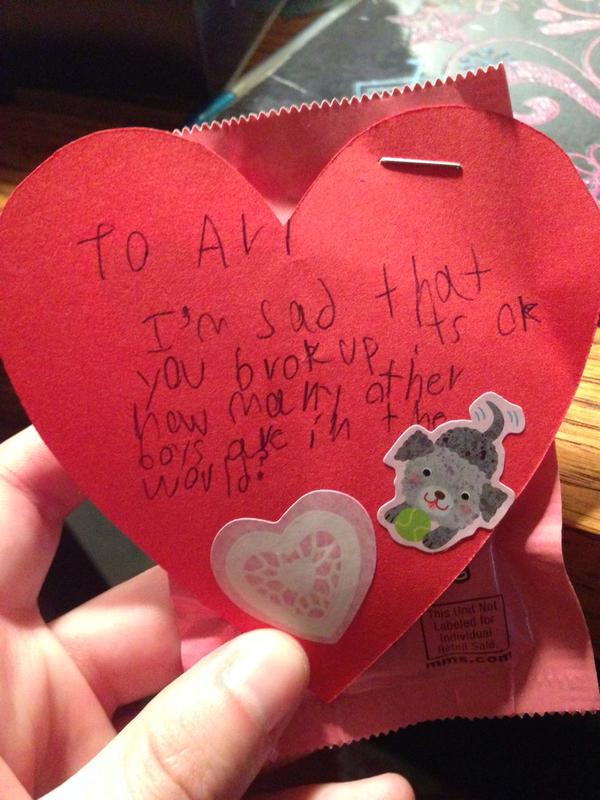 Translation — “To Ari, I’m sad that you broke up. It’s okay. How many other boys are in the world?”

Oh, what’s that sound? Grinch hearts all over the world enlarging because THAT SHIT IS ADORABLE.

Kaitlin has promised me she has a plethora of advice left, but she’s not ready to divulge the information all at once. So until next time, happy dating everyone!