Skip to content
Report This Article
What is the issue?
I’ve only recently decided to dive into Tumblr (for real this time – had a few feeble attempts in college that just resulted in reblogging bohemian looking blanket forts) but have been familiar with the raw, visceral, and sometimes haunting work of Meggie Royer for a little while now. Often accumulating thousands and thousands of notes on her posts, she is establishing herself as a household name in the Tumblr poetry community. But if you think she’s only a Tumblr sensation, you’d be sorely mistaken. At only 20 years of age, she has published two poetry collections and doesn’t seem to be slowing down any time soon. I was so excited to have the chance to talk with her about her process, inspirations, and much more. 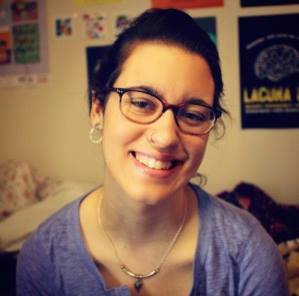 Where are you from?
Iowa, but I attend college in Minnesota as a Psychology major.

Top 3 favorite movies?
Eternal Sunshine of the Spotless Mind, Crash, and Another Earth.

Dream location you’ve yet to go?
Lake Hillier in Australia (it’s the one that’s completely pink!).

On writing, inspiration, and the Tumblr community

Thought Catalog: How long have you been writing?

Meggie Royer: I’ve been writing for about 3 years now!

TC: Have you always written poetry? Or did you start in other creative mediums?

MR: I wrote a lot of short stories when I was younger, and made a few little illustrated booklets detailing the life of my family, though they were so typo-ed it’s a wonder I can still make sense of them! I hardly ever wrote poetry until I started three years ago, save for one tiny poetry collection I made in elementary school that featured a bunch of silly rhymes about cows and other farm animals.

TC: What motivates you to write?

MR: A lot of what motivates me to write is catharsis. There’s so much release involved in writing out some of the worst parts of your life, or the most confusing parts. It makes them easier to understand and grapple with. It’s odd- sometimes things don’t seem quite real for me unless I write them down. Making something feel real makes it a top priority of mine to deal with. I also have gotten so many messages from my readers over the years, some of them telling me my writing has saved their lives or helped them survive dark times like the aftermath of sexual abuse or an abortion. Those messages are my biggest encouragement.

TC: If possible, can you take us through your writing process? Do you write with pen and paper or type? Do you sit down and write everything at once or come back to pieces bit by bit?

MR: I used to write with pen and paper but now I mostly type everything out. I always, always write everything at once. I’m not the kind of person who finishes a poem in stages. I just can’t do it. I don’t like to leave my poems hanging or waiting on me. Some authors like to let them “marinate” and keep returning to them- I want to finish one so I can turn to the next. One staple technique I’ve found myself using over the years is reading poems by other writers before I start on my own. It’s kind of like the writer’s version of stretching out before a race, or at least that’s how I see it.

TC: How often is your poetry inspired by your own life (mainly autobiographical) vs literature, those around you, imagination, etc?

MR: My poetry is mostly a mix of my own personal experiences/experiences of others I know & my imagination. For example, lately I’ve been really into Greek mythology, the stories of Persephone and Antigone and all these powerful female figures who suffered through some unimaginable wrongs. I like to incorporate their stories into my poems and combine them with my own experiences because I aspire to be like those women. A lot of my writing deals with powerful women- imagined women, the women I wish I could be like, my mother, my grandmothers, all these heroines. I’ve found I rarely write completely autobiographical poems because for me, imagination is so integral to my writing.

TC: Is there a specific poem or poet who really got you hooked on poetry?

MR: Richard Siken and his first poetry collection Crush really got me hooked on poetry. I had never read anything that raw, visceral, or personal before. It was so bloody and fascinating. Nothing about his poetry was pretty or sugared over. It was just real, like watching a car wreck. That’s what made me want to start writing my own poems.

TC: Could you speak a bit about the poet Tumblr community? How has that impacted your life? Do you find it a supportive community? Are there any downsides?

MR: The Tumblr poet community has been so instrumental in the growth of my writing. I’ve come into contact with so many incredible young female writers, and I find their work immensely empowering and unique, which is one of the main reasons why many of my poems tend to focus on strong women in history and mythology. I’ve found the Tumblr poet community to be very supportive both in writing-related endeavors and personal endeavors. There are tons of little writing networks on Tumblr that provide writing advice, constructive criticism, peer workshopping, and prompts. If I hadn’t joined Tumblr and started my writing blog, I would never have published any of my books or any of my work, and that’s no exaggeration. The level of encouragement the Tumblr poet community provides is unparalleled. The only downside is that sometimes I do get some hate messages, or messages from people asking too much of me. I think people need to understand that there’s a human and a face behind the blog, too, an entire life just as complicated and busy as theirs.

TC: I love that you’re vocal about mental health awareness. Do you have any advice to individuals struggling right now (be it depression, anxiety, bipolar disorder, etc.) and are afraid to seek help?

MR: Thank you! The best time to seek help is now. The longer you wait, the more life you’ll miss out on. But being afraid to seek help isn’t something to beat yourself up for. I think it’s very common. Asking for help doesn’t make you weak; it makes you human. Displaying that kind of vulnerability is actually incredibly brave. One day you’ll look back and realize you’re glad you sought help, and the fear and anxiety associated with the seeking and the following steps will be more than worth it.

MR: I’m quite partial to my poem “Ophelia,” which you can read at The Harpoon Review!

TC: Do you have any advice for aspiring writers and poets, especially those who are nervous about sharing work?

MR: There’s always this dichotomy out there about surviving vs. thriving. Sharing work puts writers on the path to thriving because it connects each writer’s creative world with another’s creative world and perceptions. That fear of sharing work is so worth it in the end, because it builds so many connections with readers that are so vital. You get feedback, both critical and positive, that will be so crucial for your own writing growth. Not to be cliche, but if you never try, you’ll never know.

TC: And last but not least, where can people read/support your work?

MR: My 2nd poetry book is available for purchase on the Where Are You Press store, and my 3rd poetry book will be available from Words Dance Publishing soon. There are a ton of my poems available for free reading on my tumblr blog and numerous literary journals. Also, I recently started my own literary journal dedicated to empowering women who have experienced various forms of abuse and degradation called Persephone’s Daughters, and submissions for art & writing for the journal will be open soon!