I never used to trust people who claimed they enjoyed high school.

Yes, I know, I know. That’s a pretty shitty and unoriginal thing to assess people on. Like, oh really Ari? Were you just a totally sad, insecure adolescent craving validation from your peers and didn’t get it? And like, you were the ONLY one who ever felt that way, right?! Booooo-hooooo. Eastman, you’re 23. Get over it. You’re fine.

And I am fine (pretty much?), so it’s not typically something I like to vocalize. I know what it means: some secret (or not) inner well of judgement just lurking beneath my accepting demeanor. And I do hate admitting it exists.

But alas, it’s there. And something lame will poke it. I cross paths with someone effortlessly chic and beautiful, the person who was invited to the parties and kissed the boys or girls without freaking out about it. The ones everyone looked at with pangs of envy in the hallways. I’ll be in the presence of one of these “I Was Totally A Cool Teenager” adults and feel this insecurity bubbling.

It’s this weird regression, like suddenly I’m that nervous 17 year old again calling her mom to pick her up at lunch because she doesn’t want to face the awkwardness of not knowing who to sit with. I’m there again and I feel like I’m trying so hard. I want to prove I’m worthy, funny, or just anything. And I hate it.

I just got back from attending Coachella weekend one. I went with my coworker, the fabulous Crissy Milazzo, and we covered it for work (dope interviews coming! yaaay!). So please forgive me if this doesn’t make sense because there is a strong possibility I came back a zombie. And I was sober the whole time. I still think I might have died? I’ll have to go to the doctor and have them check for a heart beat and all that jazz.

Having never gone to Coachella before, I had an idea of what it would be. I’ve never been a big fan of festivals, just too many people and I get overwhelmed 0-100 real quick. (AYY DRAKE, I SAW YOU TONGUE MADONNA) And yeah, Coachella man…It was…a mind fuck. Fun. Sweaty. Weird. Overhyped. A stereotype. All the things I thought. And then weirdly enough, it taught me things I would have never expected.

Coachella is a place full of sexy teens. This is a phrase I’ve been borrowing from Crissy Milazzo. I know it sounds skeevy and Lolita-esque (we did listen to Tyler, The Creator’s set in which he talks about a girl being perfect but too fucking young, hm…more on that later though), but it’s 100% accurate. A ton of attractive youngins parading around, doing Molly for the first time (maybe?). It was such a spectacle to observe and I felt kind of old. A group of beautiful, bronzed babes were in front of us at one point with crop tops (to be fair, I wore one too) and I just thought, “YOU GUYS CAN’T LOOK THIS GOOD RIGHT NOW?! YOU MUST STRUGGLE A LITTLE SO IT BUILDS CHARACTER!!!”

But here’s the thing: my partner-in-crime for the weekend, Crissy, was absolutely a sexy teen. We didn’t go to school together. I can only surmise from what we’ve talked about and her writing, but yeah, Crissy was dope as fuck. She still is. Probably even cooler now, in a super real way. I’m totally #TeamCrissy. As cornball as this is, my favorite part of Coachella? Bonding with her and really cementing not just a working relationship, but a very genuine friendship. 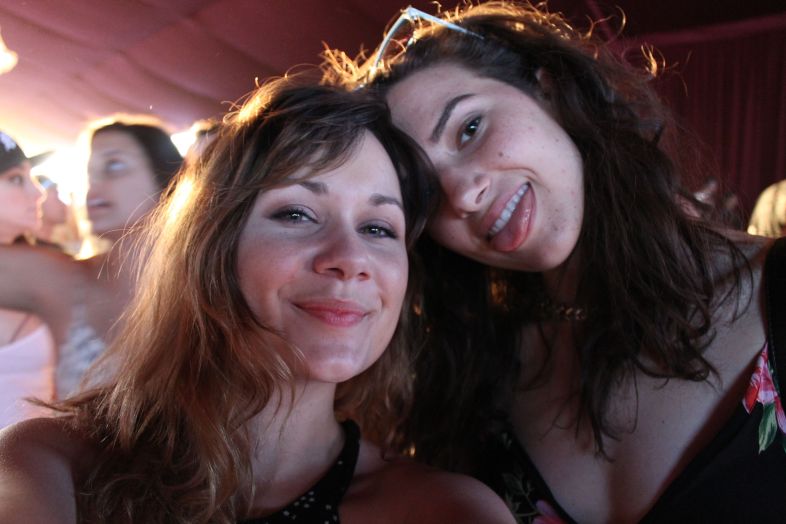 I wasn’t a cool teen. Or at least, I never saw myself that way. I fluctuated from feeling invisible and craving some sort of spotlight to wishing I was, in fact, donning Harry Potter’s cloak and just ghosting from everyone and everything. High school just sucked. It sucked big time. Weirdly enough, the only time I felt I could be myself was on the internet in the form of YouTube videos. And look what I do now, work on the internet. ~*~*tRiPpY~*~*

Crissy and I shared a bed, laughs, complete exhaustion and delusion from working late into the night, not being able to find my car, finding a cockroach in our hotel room — basically anything that could happen, oh, best believe it happened. And we discovered how much we had in common and how well we vibed together.

I would have been scared to approach Crissy in high school. And really, who knows if we would have been friends, but we are now. And I think that’s a strange thing that hit me at Coachella. All these groups of sexy teens that I could pick out and know EXACTLY which ones were the Queen Bees at school and I wanted to tell them: “YOU MIGHT MAKE FRIENDS YOU DIDN’T EXPECT! GO TALK TO LIKE, EVERYONE!”

I don’t know. Maybe none of this is revelatory. Maybe this is just my zombie brain wanting to make sense of the shit-show that was Coachella. But as I looked at the labeled cool kids, the kids who are also cool (but don’t think they are), and everyone else, I just kind of hoped they all randomly meet up again. And they strip the superficial layers of what we should be or who we should talk to, and just take the chance to have a conversation.

I really love Crissy. And that’s what Coachella taught me.

For more from Ari, like her and make her feel good!!!

15 Things I Learned About Coachella By Actually Going There

This Is My Love Hate Relationship With Coachella

‘That’s My Lemonade, Ho!’ Attending Coachella As A 35-Year-Old

How To Be A Teenager