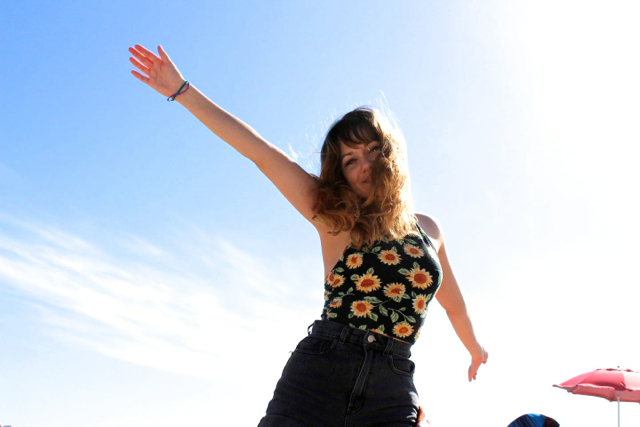 I’ve had “just sex” and I never liked the way it made me feel. During. After. It just always felt kind of empty. I didn’t walk away feeling satisfied, just fucked. But it was different with you. It’s not like we were in love, but you still satisfied me. It was something I hadn’t quite experienced before. The casualness of it, but still feeling it. I was hooking up with someone who made me feel things, sure maybe not some dramatic symphony of violins or whatever other corny shit I was so used to thinking I heard when I fully connected with someone, but you still gave me something I liked. I’m always overanalyzing, freaking the fuck out, remembering the weird thing I said and wondering what you’re thinking. But overall, I didn’t really overthink it with you. It was refreshing. I liked the way it felt.

Just sex, I told myself one night. I think maybe it’s just sex to him. Maybe this is just sex to me. But then I’d hum “Amazing Grace” to myself in the car, just to see if I did know the tune. I’d think about your blue eyes and the moments you ask me to stay the night, and I said no. How you’d ask for a little longer, and I’d agree. You’d hold me, and I settled into it. I knew it wouldn’t last, but for a while, it was good. For a while, I felt good.

You asked that I tell you moments I had doubts and I blanked. I stopped and felt awkward. I still wanted you to like me, I think. I still do. I started to really like just hanging with you. We’re different in so many ways, but some of my favorite nights in the past few months were just chilling in your apartment. With your roommate. Working side by side. I enjoy your company. And I am so damn selective with that kind of thing. I don’t have a lot of friends here. I’m in a city I didn’t grow up in. I didn’t go to college in. And fuck, I’m lonely. We met on Tinder, for crying out loud.

If nothing else, you helped me feel less lonely. I didn’t even know how lonely I was until you. Until I stopped feeling so lonely.

I thought you were so fascinating. Let the ego swelling commence, but you’re brilliant. You know that. I always pride myself on being so good at figuring people out. Just some lil Sherlock trying to unlock all those feelings and dark spots in people. But with you, I kind of didn’t want to. I think I understood I wasn’t ever going to totally understand you, and I respected it. I swear, sometimes I’d just look at you and I could see you calculating things. You’re two steps ahead of everyone and it’s very seductive. I don’t know how else to describe it. I’m not just saying this, but I see such huge things for you.

When we were dating (though I guess we never labeled it that), you didn’t need me. And I didn’t need you. I think I liked that. There was absolutely nothing codependent about us. And that’s a really good thing. And weirdly rare nowadays.

But truthfully, I think I liked you more than I thought.

A lot more than I let myself believe.

But you stopped responding. And I reached out to you when I needed a friend, I said I was suffocating and needed a friend, and you just didn’t say anything back. You claimed I’d be an important person in your life, but it must have been bullshit because you just let me wallow in my own embarrassment. I know I write for the internet, so it’s just another day in the life for me, but I thought you were better than that.

And I guess you’re not. And that makes me sad.

P.S. Sorry I said I wouldn’t write about you. I guess we were both dishonest.