There’s a very good chance I might be a little too comfortable talking about death. As an incredibly neurotic child, I was super into Emily Dickinson poems and felt bizarrely connected to Woody Allen quotes. Who wants the 10 year old at the sleepover who, after pizza and pixie sticks, decides to ask, “Do you guys ever think about death?” The answer: nobody. Buzz kill Eastman at your service.

I became personally acquainted with death when I was 16 and lost my father to cancer. There’s that saying, “When it rains, it pours” and describing the next year of my life as a storm doesn’t begin to do it justice. My family continued losing people. Friends. People I didn’t know, but felt like I should have taken the time to. I felt like Midas, but instead of everything I touched turning to gold, it turned to dust. Disappeared. I was some unknowing Medusa type creature. I was losing everything I loved. Death was around every corner.

Fast forward to my senior year of college, and death began to eat away at me again. I lived with my best friends, and it was one of the best years of my life. But it also contained some of the lowest lows I have ever hit. As much as I try to be an open book, I had experiences that are still difficult to speak about. I was flying so high one moment, laughing hysterically with my roommates at something incredibly stupid, and the next, I was face down on the floor. Alone, wondering if I could ever get back up. I was addicted to feeling. It was being numb that terrified me. Being alone, on the floor. Not feeling anything. Thinking maybe I could just stay there permanently.

I never said the words out loud. But I wanted to die on more than one occasion that year. But any moment it weighed too heavily, I always saw my mother. I saw my dead father and it was enough to push the thought back out. I saw a counselor on campus, but still found myself holding back. I wanted her to like me. Isn’t that strange? I was there for help, but I still packaged myself in a way that was goofy. I am class clown. I am the entertainer who will make jokes to cover up the depth of pain. The more I make you laugh, the more I’m protecting myself. I didn’t allow myself to dig deep. It was only when I was on the floor. Alone.

The 4th of July right after graduating, I was severely struggling. I was hurting. I had been in a codependent non-relationship, relationship, and I was afraid I was losing myself to it. I was alone, on the floor. It was one of those days when I couldn’t quiet that thought. I am a strong person, I know this. We are ALL strong, but even the strongest individuals have days when everything weighs just too heavy. Everything felt heavy. The air felt heavy. I had flashes of my best friends laughing. I had flashes of the darkness. I got off the floor, and I got into my car.

I was living in Los Angeles and decided to just drive Sunset Blvd for as long as I needed. I just drove. I probably looked like the most melodramatic sight, stone-faced with tears just rolling down my cheeks. I wasn’t in my car for the purpose of killing myself. I just needed to do something. I saw a flash of a headlight, and the flashes started again. I was terrified I’d go numb.

I said it out loud in my car. “I’m going to the tattoo parlor. If they are open today, I won’t kill myself.” I said that. Thinking back on it, I’m embarrassed by how impulsive and unfair that was to say. I was playing with fire, and to be honest, still probably wouldn’t have done anything. I would have seen my mother. I would have seen my father. I would have kept surviving instead. But I did say it. And in the moment, I believed it.

It was a holiday and all the stores I passed were closed. I had gotten two other tattoos at this one particular spot, and had all my hopes pinned on it being open. It had to be open. I pulled up, and the neon lights were flickering, my savior on Melrose Ave.

My roommates were all shocked when I came home and I showed off my new ink. The artist was incredible and able to tattoo my father’s exact hand writing from an old card I always kept with me. I was so in love with it. I think I was in so much internal pain that day that anything from a needle was barely noticeable. I smiled the entire time. I didn’t feel numb anymore. 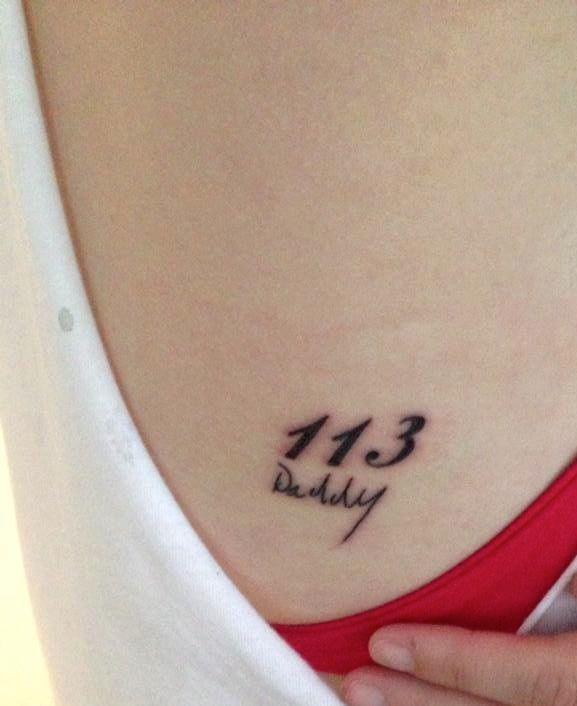 I can’t say that I know what would have happened that day had the shop been closed. I think I would still be here, writing, trying to make sense of things I’ve never known how to explain. But I’m grateful I didn’t have the opportunity to find out if that would have been the case. It sounds strange, but a tattoo saved my life that day. And every time I look down at it, I remember to choose survival. I remember to stay here. I remember to keep fighting.

Read this: What It Means To Date A Girl Without A Father

Read this: 23 Parents Describe Their Kids’ Creepy Imaginary Friends (That Are Probably Actually Demons)
Read this: 17 Things That Happen When You’ve Been Friends With Someone For, Literally, Ever
Read this: 12 Terrifying True Stories From People Who Will Never Forget Them

The Day I Had No More Fight Left In Me

This Is What Happened When I Chose Myself