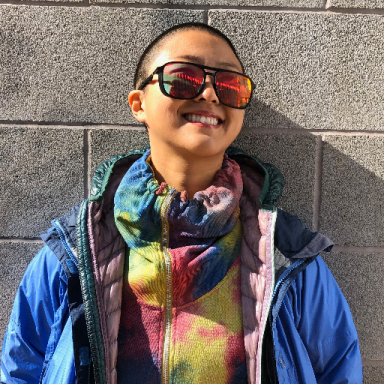 It’s been more than a month since we landed in Vieques and I have fallen in love with this island.

As a girl used to cities, suburbs, and rural-ish towns, small island living is an eye-opening treat.

Something about the remote geography, no stoplights, beautiful beaches, laissez-faire attitude of governance, delicious fruit falling off trees, and the option to practice yoga outside every morning is the perfect concoction to deem magic.

When we arrived, however, I felt like a stranger in a strange land. Quite often I forgot we were still technically in the United States. Everything appeared more run down than I had expected.

Roads were crumbled and paved with potholes and disarray. Abandoned structures lay agape, rebar poking through concrete and vines swallowing the walls. Horses stooped by the side of the road, picking through trash. Shops and homes looked like they could use a renovation or two.

Food that I am used to is hard to come by. Back home, I shop mostly in the produce section and head to the innards of the store when I need things like tahini or almond flour to make whatever vegan, fusion recipe I found while on a three-day fasting cleanse, salivating over pictures on a health food blog to satiate my compulsive appetite. Oh, how wonderfully neurotic is 20th-century living!

Here at the mercado, even the essentials are a distant dream. The produce section is little more than soft potatoes, wilted spinach bleak and blear behind the plastic, and tomatoes of a mysterious and unnatural hue.

There is not much variety, and what is available doesn’t look fresh nor healthy because it’s been imported from thousands of miles away. So I spend most of my time perusing the canned and dried food aisles and the Cheez-It shelf.

And I spend more time eating ice cream than I ever have in my life. As a kid, I preferred fruit-flavored popsicles to creamy-textured ice creams, and now, as an adult, I vilify sugar water but justify sweetened milk from a cow’s tit, especially on a hot island with a food desert issue.

I had never known what it was like before, and it sucks, to say the least.

It was around these first trips to the store that apprehension peaked her nervous busy head around the corner at me, beckoning with her fearful gaze.

But then there is our home on a hill overlooking the neighborhood all the way out to sea and over to the main island that frames my view every morning I wake up.

And the still, dark nights when the sky is alight with stars as I turn every which way searching for constellations, an unobstructed 360° view on our very own hilltop planetarium. On one of the very first nights we were here, we saw a star falling from its perch, a razzle among dazzles.

The beaches are postcard-perfect beautiful. The calm, turquoise water sparkles in the sun during the day and at night, closes her eyes in a sweet and sorrowful way like a nostalgic romance. The silhouette of palm trees painted against a sunset of oranges, reds, and pinks—colors of sweet, summer love.

And one day I was driving into town, winding through streets and steering smoothly around potholes as second nature, eyes alert to the landmarks that tell me where I am (no street signs here).

As I turned the corner past the car dealership and headed up the little hill through the deeply shaded grove, something settled into focus, and the houses that seemed to be in such utter ramshackle disarray when I arrived I noticed were so well-used and loved.

My eyes took in each pothole, each rusty car on the side of the road overtaken by vines as another member of the neighborhood.

The broken chair in front of the abandoned lot, the flock of wild fowl roaming the yard on Cow Hill Road, all as much a part of the neighborhood as the old man sitting in the shade—every time I drive down that road, he’s there lifting his hand hello, his weathered face creasing into a smile.

When we arrived here, Jim introduced me to Table Talk pies, little snack pies that are individually sized and made in Worcester, Massachusetts. We were surprised to see them here in Puerto Rico.

When he discovered them at Mollino’s, the local tienda, we began eating them religiously. The Cult of Table Talk.

“Pineapple pie?” we asked each other with a devilish smile every time we left the house. Where others have beer or weed, we had Table Talk pies.

And each time I left Mollino’s with boxes of pies, I looked up at the pizza shop whose second story patio overlooked the busy, narrow street.

One night last week, when we decided to treat ourselves to pizza, we went to this shop, Mama Mia’s. Over beer and slices of pepperoni laden in cheese, we watched the traffic go by, cars blasting reggaeton from trunk speakers set to an impossibly loud volume. People walked about here and there in the dusty light of night.

For a tiny community, the only rule there needs to be is “Don’t be an asshole.” I like that. It’s autonomous and self-regulating on a small island.

This night was a bit chilly. Where I’m from, the leaves would already be changing color and I would be taking out my fall suede boots. Here, I just wished I wore a t-shirt instead of a tank top.

As I gazed over the rooftops below us, watching a slim cat slither his way through the dim shadows, all shoulders, I thought about how free I felt. In this space, there was nothing to worry about. And yet out of habit, I sought for something to be wrong. Just for a second, though, before I caught myself.

Out here, a lot of unlearning is taking place.

I’m discarding that there’s something wrong with me.

I’m discarding that family is limited to biology.

I’m discarding that emotions mean something personal and I must indulge them. Sometimes stormy skies take over my horizon and it doesn’t mean anything, I can just let it be.

The Ultimate Cheat Sheet To Writing Your First Book

You Can Be Whoever You Want To Be