You may have heard the saying, “time heals all wounds.” Well, it’s not true.

When you lose a loved one, grief is painful, but the whole process becomes impossible if you never recover their body.

In 1982, my sister, Peggy Dianovsky disappeared. It was reported she walked out of her home leaving her three little boys, ages 5, 7 and 9, never to return. This is also not true. 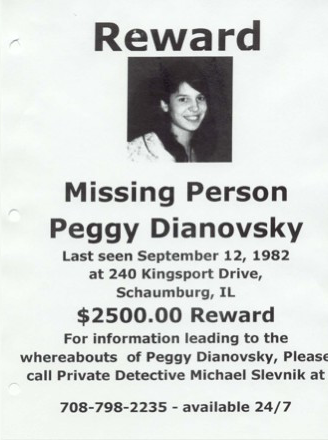 She was a great mom

If my sister was anything, she was a dedicated mom. I still have the many pictures she sent me of her boys, with little notes scribbled on the back, telling me their latest accomplishments. Her boys were her life. You don’t file for divorce and then just take off.

Over the years, she lovingly put together baby books for each of them. Little notes, napkins from parties, pictures, and even clippings from their first haircuts filled each page. The bindings weakened from all the love she poured in. You don’t document every little milestone of your children’s lives and then just leave them. 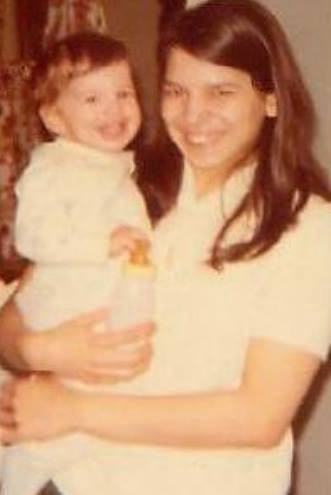 Twenty years after Peggy disappeared we had our day in court. Her missing person case was reopened as a possible homicide. Day after day, we sat in court listening to the testimonies.

I remember one day in particular. They turned the television monitor in our direction. When the video started, I quickly recognized her Schaumburg home. My stomach tied in knots as I saw her front door open. Leaning over toward my brother, I said, “I can’t do this.”

The tears were unstoppable, the pain was familiar.

Ignorance can be bliss

I actually thought I would feel better if I just knew more. But, the more I learned, the worse I felt.

The video camera scanned the inside of her house going up to the second floor, where her middle son witnessed his mom being beaten. But this video today showed no people, just empty rooms.

While her husband admitted he had beaten her, he said she walked out of her house on her own accord, after an argument. Those of us who knew her, knew she wouldn’t have left her boys.

Day after day, we sat and heard bits and pieces of that awful day in September. But finally the day came when it would be all over. After 10 days in court, we were to finally hear the verdict.

The time had come…

Since it was a bench trial, we waited till the Judge resumed the session. Those 30 minutes lasted forever.

The courtroom was deathly quiet. And then, much to our surprise, Judge Porter told us why he discounted the testimony of her two sons. He felt if what they shared was true, the Schaumburg police would have gotten that information back in 1982, when they questioned the boys. Three scared little boys who were told they didn’t have to tell the police anything, and they obliged.

They were simply trying to understand where their mother was, and why for the first time in their young lives, she didn’t come and give them their good night kisses.

“Therefore, I find the defendant…

Really? It was going to be over in just a few minutes? Something that has tormented us for years?

“… I find the defendant…not guilty.”

We couldn’t move. All of us sat there in disbelief while the other side of the courtroom erupted in cheers, giving my sister’s husband high fives and patting him on the back.

Even though the judge didn’t believe he had enough evidence to convict Bob, he did declare Peggy dead and said it was at the hand of a crime.

I’m so glad I was part of a homicide group which met at the Kane County Courthouse once a month. I learned even if he had been convicted, it wouldn’t have changed anything; she’d still be gone.

It was as if it never happened.

But it did happen. And we are reminded of it every April 15th, Peggy’s birthday. And every holiday as we sit with an empty chair, a constant reminder.

When your loved one is killed, you are automatically inducted into a club you never asked to join. And you forever feel different.

Some years ago, my brother and I were invited to share about Peggy’s disappearance on the Intimate Partner Homicide Investigation, hosted by Susan Murphy Milano. Once again, we looked back at those events that shook our lives, feeling the heaviness of it all. But, it also felt good to talk about her, to validate her life.

Peggy (Gollias) Dianovsky was a hard working, dedicated woman who simply wanted to love and take care of her children. Her mistake was not in seeking a divorce, her mistake was in waiting so long in telling us what was going on.

Perhaps things would have been different if she had shared earlier what she was going through. Mary Schlott, her divorce lawyer, suspected foul play as soon as she heard of Peggy’s disappearance. Though Gus tried going to the police he was unsuccessful at getting help immediately. Since Peggy’s husband had told police she would be back in 5 days, they said they needed to wait.

We miss Peggy so much. She was supposed to be here sharing our lives with us. Instead, we’ve seen her kids grow up without her, and now we see her beautiful grandchildren who have only heard about her.

After the trial, we had a memorial for Peggy. It felt too little and too late. Each of us got up and shared what she meant to us. So many years had passed since her disappearance, evidenced by the half empty room.

At the cemetery, we stood by her empty grave looking at a picture on a gravestone of Peggy as a little girl.

I will never forget my sister, nor will I ever stop loving her.

Sure, I hope we find out some day where her body is, but I also know that may never happen.

One day, as I left my homicide group and cried on the way home, I thought about how awful her last moments might have been. And God saw my broken heart and whispered, “Anne, I was with her.”

From that moment on, I had peace.

Do I miss her? Yes. You never stop missing the missing.

Writer. Poet. Speaker. Married to Michael, grandmother of 5. Author of 14 books. Follow her on Medium here.