Tuesday, July 14th, 2015 was a historic day. President Obama finalized negotiations with Iran for a nuclear treaty. And the President completely failed to mention the four Americans that Iran is currently imprisoning, beating, and torturing.

One of the imprisoned Americans, Saeed Abedini, particularly captured my attention. This thirty-five-year-old dad of two hasn’t seen his wife or two young children since 2012.

As a military spouse, I know a little of what it’s like to be separated.

Three years ago, my husband deployed to the Middle East for a year. It was hard. I couldn’t bear to see each of our son’s milestones go by, first word, first step, first haircut, without my husband there. I worried about my husband over there in a combat zone. But he was with his buddies with the force of a fully-equipped battalion looking out for him. I spoke to him on the phone most days.

Now look at this American family. 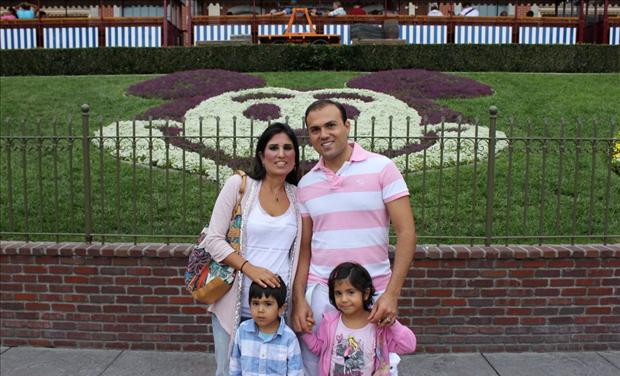 That’s Saeed, his wife Naghmeni, and their two children, Jacob (now 7), and Rebekka (now 8). They’ve been separated for almost three years now. Saeed’s in an Iranian prison merely because he helped some Iranian orphans and spoke about his faith in Christ. Saeed has no American battle buddies looking out for him, nor the fire power of a U.S. battalion behind him. He’s not warm and dry and fed. He’s in a jail cell being beaten and tortured so bad that he’s been hospitalized on multiple occasions.

His kids have released heartbreaking videos and pictures asking for their daddy to come home. Yet the years tick by as Saeed’s wife posts birthday pictures without “Daddy.” Christmas pictures without “Daddy.” Father’s Day pictures without “Daddy.” Saeed and Neghmeni’s 10th anniversary passed last year. They should have been able to go on a getaway to Florida, a cruise to the Bahamas. Instead, they cried even more. And it’s not just that they’re separated. Saeed is being actively beaten and tortured. As he wrote to his son when the little boy sent “Daddy” an invitation for his 7th birthday party: I want to be there, but “my chains are keeping me from you.” Can you imagine how it feels to know your loved one is in chains, being tortured? Tortured.

Naghmeni has traveled the U.S. and abroad pleading with diplomats, government officials, and anyone who will listen to “free her husband.” Yet, Saeed remains imprisoned.

And Saeed’s not the only falsely imprisoned American in Iran. There are three more. Thirty-one year old Amir Hekmati has been rotting in Iranian jail for four long years. The former marine who served four years right after 9/11 and deployed to Iraq is remembered fondly for his athletic ability. Now in prison, he has lost thirty pounds and his family fears he may have contracted tuberculosis. President Obama waxes eloquent about his desire for all U.S. citizens to have proper health insurance and medical care.

Does President Obama not care that Amir is wasting away in an Iranian jail with no medical coverage at all? Why doesn’t the President act to free Amir?

There’s been a lot of talk about how our vets aren’t receiving proper services post-discharge. Here’s one vet that would jump at the opportunity to be unemployed and have no healthcare benefits rather than what he’s been offered post-discharge—a foreign jail. Is that how America honors her vets? Meanwhile, Amir’s dad is dying of brain cancer, and his only wish is to see his son one last time before he dies.

President Obama’s dad opted out of his life almost completely. Does that mean President Obama thinks it’s ok that Amir‘s father won’t get to see his son once more before brain cancer claims his life?

Like Saeed, President Obama also has two kids and a loving wife. Has he no heart? How could he sit down at that negotiating table and not say: “Hey, Supreme Leader Ali Khameni. Send my countrymen home.”

President Obama’s administration has made it clear that he believes nuclear negotiations are a separate issue from these four American lives, so he had no obligation to mention those four in Vienna this week.

If these were President Obama’s children, siblings, or parents imprisoned, do you think he’d be espousing that line of reasoning? President Obama has the power to free these four Americans. Who cares what’s separate from what?

Use your power, President Obama, and free these citizens who are relying on you as America’s Commander-in-Chief.

After all, President Obama saved Bowe Berghdal. He’s fully capable of getting these four American citizens out. But he doesn’t. This is utterly unacceptable.

If America Doesn’t Leave A Man Behind, Why Are We Leaving This American Citizen Behind?

What’s Going On With The U.S. Senate And Iran Right Now, Explained