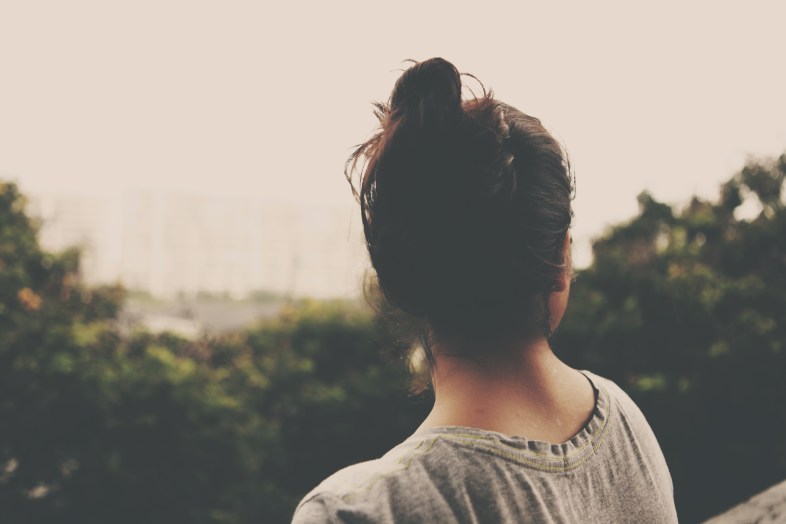 “I’m not saying you’re going to hell, but you’re in deep,” a woman my age tells me, as we stand between two parked cars, a sympathetic smile spreading across her face.

It’s a Saturday morning in Northern San Diego and I’m standing in the parking lot of a reproductive health clinic. The woman, an anti abortion protester, walks away, but not before handing me a little plastic fetus.

I’m sweating beneath my bright yellow shirt that reads, “Patient Escort, Escolta Paciente.” Many women come to San Diego from Baja, Mexico, where abortion is illegal.

At the end of my shift I will return the shirt to Family Planning Associates, a reproductive health clinic in dire need of volunteers to walk patients into the building because of anti-abortion protestors who inhabit the parking lot.

A car pulls into the parking lot and seventeen pairs of eyes follow as it parks. It’s like watching an animal stalking its prey from afar.

Doors open and two women emerge from the car, immediately swarmed by people.

“We just want to help you. Don’t go into the clinic,” says a middle aged man in a Yankees cap.

They carry signs that read, “I am not a protester. I want to help. A woman almost died here. Can we talk.”

Some women yell back at the protesters, some listen to their sermons, but many just stand silently, deer in the headlights, unable to speak.

I feel bad even approaching cars, thinking of how frightening it must be, to wake up on a Saturday morning to get an abortion, unable to eat or drink, only to have people run at your car like a bull charging a patron in a red shirt.

One particularly disturbing day, a car with Baja plates enters the parking lot, a husband driving, and his wife hunched over in the passenger seat. Protesters surround the car, and he rolls down his window, eager to speak to them. We identify ourselves as volunteers from the clinic, citing our ability to escort them inside, but the husband tells us he wants to hear what the protestors have to say.

Someone tries to go around to the passenger side to pass this information along to the woman, who remains in her seat.

The husband has turned on child-lock, so the woman cannot roll down her window. She looks on the verge of tears, but never makes eye contact with us.

An hour and many pamphlets later the husband drives the both of them out of the parking lot.

The protesters celebrate their victory, giving each other high-fives.

It’s the type of thing I’d seen in movies or read about in feminist literature, but I never assumed it was happening so close to me.

Next to Family Planning Associates sits another “clinic,” the Pregnancy Resource Center. They’re referred to across the nation as pregnancy crisis centers but it can offer nothing more than an unlicensed ultrasound. The owner, who knew I was a patient escort for the clinic next door, gave me a tour. I was shown rooms with two chairs, a television, and a painting of a fertile looking woman posing with a lotus flower.

The back room was particularly disturbing, filled with baby clothing, toys, and nursing supplies. The owner explained to me that the clinic operates on the point system, wherein women who, “are getting an education, have a job, or are setting personal goals and reaching those goals” are given points and can in turn use those points to purchase the materials in the back room.

Legally, pregnancy crisis centers must post a sign in their lobby informing patients that they are not a medical facility, but many don’t comply with this law and remain unpunished. Instead, the lobby is filled with pamphlets similar in text, graphic, and tone to the ones the protesters push onto people in the parking lot below.

These pamphlets are catered very specifically to each gender. Pamphlets for young women are pink, littered with phrases like “They don’t make condoms for a broken heart.” The men’s pamphlets, true to stereotypes, are blue and warn men that “women who have sex will likely want to get married.”

When asked about their services, the woman who owns the Pregnancy Resource Center tells me that their abstinence-education teacher recently left.

She also claims they aren’t affiliated with the protestors, but many can be found sitting in the lobby, taking a break.

Out in front of the “clinic” sits a box of home baked donuts, and a case of bottled water, all of which they offer to the women, knowing that if they eat or drink, they can’t have their procedure.

Some kneel on the sidewalk outside the parking lot besides a seven-foot tall Virgin Mary painting that they wheel in and out of a van every Saturday. Others patrol the parking lot, they run in front of cars, they offer women “a pill that can reverse the abortion” they hand out pamphlets, but most of all they preach.

One man drives his car around the parking lot, his stereo at full volume, blasting a sermon. This is the same man who went up to a fellow patient escort and said, “How did it feel when you slid warm out of Satan’s c**t?”

However, most of the protestors carry themselves with an air of unsettling condescension. “I’ll pray for you,” they tell me. I’ve learned that responding often leads to a conversation somewhat resembling me speaking to a brick wall, so I say nothing in return.

Every day hundreds of people drive by the parking lot, oblivious to what’s happening just a few feet away. Behind a row of shrubs is a completely different world, one where women are intimidated, talked down to, and led to believe that they don’t have control over their own bodies.

It’s a world where women’s oppression isn’t just talked about and heard, but rather becomes visible.

It’s on this asphalt, warmed by the San Diego sun, that women cry, yell back, and make some of their hardest decisions. But between the white and yellow lines, I know that a difference can be made, as women reclaim their bodies, making choices for themselves and their futures.

As one young woman leaves the clinic she is approached by a protester. The protester begs her to undo the abortion she’s just had, telling her it isn’t too late. The woman, obviously angered, yells back, “I’ll undo my abortion if you pay for all the diapers, the daycare bills, the food, all of it.” The protester insists she will, and gives the woman her phone number. “I’ll hold you to this,” the young woman shouts, slamming her door shut. The car peels out of the parking lot past the seven-foot-tall Virgin Mary. The protester watches, gripping her bible and pamphlets, and then murmurs, “I hope she calls.”