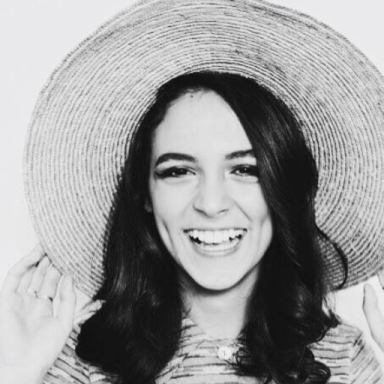 I can’t tell you how many hours we’ve recently spent sitting on our L-shaped burnt orange sofa in the living room, drinking coffee in the mornings, talking about spirituality and dramas and how to stay joyful in life. We always end up whispering secrets to living a full life. Sometimes, though, I have to try so desperately to stay present with what my mother is saying. She talks a lot, so about 30% of it goes over my head, and I tune out sometimes. Sit with myself for a quiet moment. Take a deep breath and look at the woman in front of me.

This is my mother.

Sometimes I look at my mother and see the child who grew up with her twin sister on a farm in Sarajevo—up the mountain dubbed Romanija, a 37-minute car drive away from Sarajevo, to be exact. I see the lines on her face that roadmap the oceans she swam in, the animals she cared for, the relationship she had with her own mother.

I see the woman who struggled with her sense of self in her 20s (as we all do).

I see the woman who went through a war with her children and sister and sister’s children. Who was scared to walk down the street for fear of being shot down by snipers, and yet she did it again and again and again to make sure her pregnant sister was loved.

I see the woman who got her family out of Sarajevo during this war. Who was separated from her husband for two and a half years with no iPhones. No FaceTime. No Zoom. No Skype. No way of contact except for the occasional telephone call.

I see the woman who took care of her son alone for these years. Who had to hold onto the belief that everything would be okay.

I see that woman in front of me.

But I also see the woman who enrages me. Who won’t listen to me and who talks over me. Who tries to control me. Who brings out the little kid in me.

I see these stories in my head, as well as the woman in front of me, whose picture I paint differently after each conversation we have.

I see a woman in front of me who I think I know, but I only have a limited belief of what I know.

I see the woman who I made the villain and myself the victim. But we’re all our own villains at the end of the day. Villains who villainize each other. What if that energy was used in other places? Oh, what a world we would then live in.

I see the woman who desperately searches for somebody to see her as she tries to tell us her messages. When she shares her passions.

I see the woman who sings along to instrumental songs out loud and laughs to videos of puppies walking on treadmills.

I see the woman who went to America for a summer in university and met a woman named Rhonda who introduced her to peanut butter for the first time. And tea. Copious amounts of tea.

I see the woman who’s been a stay-at-home mom for the past God knows how many years, who’s stayed at home well after her children grew up. Maybe it’s comfort. Or fear. But who am I to judge?

I see the woman who grasps at her iPad and desperately tries to understand how to send emails, links, YouTube videos, and more. She has this sea of desire in her heart to learn, but something stops her from trying.

I see the woman who danced in the grass and swam in the sea. Who snorkeled for shells and made friends with the fish.

I see the woman who I call “mama”.