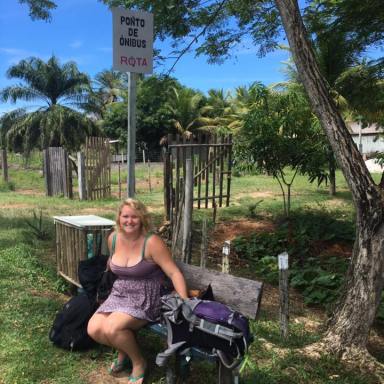 Last night, I just kept repeating to myself over and over again,“This is rock bottom.” Snot poured from my nose and my eyes let loose a torrential downpour of tears I’ve only felt to that extent twice before.

The first was when my childhood dog Dudley had to be put down. Dudley was a giant schnauzer and my parents’ first baby. When I was five, he moved from New York to Colorado with us, and he was my first love, so snuggly and big and cozy and safe. I don’t remember why he was put down or how old I was—maybe seven or eight—but I do remember writing this for some class assignment after the fact: “My eyes were big and red like tomatoes.” That image has always stuck with me. Grief as told by tomatoes. Dudley was the first big loss of my life, and I had no words to describe the pain of that loss. But what I did know were tomatoes. And on this day, I looked like one. I found comfort in the unknown by making connections to concrete things I did understand. Death is unknown and scary. Tomatoes taste like candy picked straight off the vine and make spaghetti taste good.

The second time I cried this hard was almost two years ago when I had a miscarriage. The baby was unplanned, but one day I woke up and just knew I was pregnant. I took a test to confirm what I already knew, and just like that, I was a mama. I was 23, dating a boy who rubbed my feet after a long day and rolled me blunts whenever I asked. I was happy, but we weren’t soulmates. We had been fuck buddies for a year beforehand when I was going though one of my IOPs. He lived in a trap house with meth heads for roommates who enjoyed fixing old military cars. Loose parts and half gutted cars filled the driveway and garage. He would greet me at the front door and walk me to his basement room, pointing out the spots on the floor that his roommates had been picking at for hours the night before. He was a gun-loving pot enthusiast with a cute dog and fascination with conspiracy theories. I knew we weren’t compatible whatsoever, but he was kind and I was so lonely. Eventually we moved on. I started my career in social work and got my own place. Coincidentally, he moved to a house five minutes down the road. We reconnected, and I made it clear that I valued myself too much to just keep having these meaningless hookups. I cried as I told him my frustrations and how for just once, I wanted someone to want me. To pick me. And after that night, he did.

He became my person. He loved the growth he saw in me and made me feel so safe. I’d never been so open with anyone, and that terrified me as much as it drew me closer to him. Because of this, I was able to ignore the red flags. I didn’t mind that I wasn’t seeing my friends and family as much because I had him. I would agree when he talked poorly about my family, saying they didn’t understand me like he did. I decided I could live with our opposite worldviews. And who knew, maybe spending time with me would change his mind on some of the issues that disagreed upon. (Spoiler alert: It didn’t.)

The irony of this whole situation is that I worked at a domestic violence shelter during all of this. I spent my day working with survivors, validating their experiences and educating them on the power and control dynamics of unhealthy or abusive relationships. While he never hit me, the relationship wasn’t healthy and just got worse over time. I was isolated and made myself small and quiet to make him happy. And then one day, after a roadtrip to Santa Fe where I adopted my dog Spot, I was pregnant.

I was in shock but also felt this sense of resignation. I’ve always known I would be a mama. I love kids and I’m good with them, and this was just happening a little earlier than I had planned. There was never any talk of whether or not we would keep it. This was the final piece he needed to tighten his grasp on me. I moved into his house the next week because that’s what families did. Nevermind the carpet was moldy and the second bedroom was a weed grow, we would make it work.

I was eight weeks along when I lost the baby. As certain as I was when I found out I was pregnant, I knew that day I would lose it. I went to the ER after spotting all day.They did an ultrasound and reassured me everything was okay before sending me home. That night, the cramps started. What followed was three days of incredible pain, both physical and emotional. There was so much blood. He would walk me to and from the bathroom because I was too weak to do it. When the moment came, we both knew I had lost the baby. I screamed and cried and unleashed sounds I didn’t know I was capable of creating. It was so early on. It shouldn’t have been so hard. That was the second time I cried so hard I had tomatoes for eyes.

We never grieved the loss of our baby. We just grew further apart until I eventually left him. About a month after my miscarriage, he proposed and I said yes. I was too numb and he thought this would bring us back together. But after he pulled a gun out during an argument, I finally snapped back into myself. I couldn’t live like that anymore. He went to work and I called my mom. We packed up everything I had and I moved home that same day.

Because the relationship ended so badly, I always talked about the miscarriage as my saving grace. It severed the connection I wasn’t strong enough to do on my own. At work, I would see babies, and my friends over the years have had their own, and I was always happy for them, but I always felt this pit in my stomach. I told myself it wasn’t sadness, because I wasn’t sad—losing the baby was the best thing that could have happened. But last night, after two years, that story I told myself to make the bad feelings go away finally imploded on itself.

I had taken the week off from work originally to visit friends in Pennsylvania, but as the covid numbers rose, I decided it wasn’t the right time to make a cross-country road trip. So instead of spending time with friends I hadn’t seen in years, I gave into the depression and anxiety that had been slowly creeping in for the last month that I had been doing my best to ignore. After a week of seasonal, covid, election, and standard severe recurrent major depressive disorder, this current episode had me feeling numb. I was coping by watching old Skins episodes and cuddling with Spot. Then suddenly the week was over and I was going back to work the next day. By midnight, I couldn’t sleep because I was so anxious, so I reached out to an old friend. We broke into a hot tub and commiserated over our lack of serotonin and general Millennial existential dread. I felt happier than I had all week.

But quick fixes don’t work. The banter turned to genuine concern and compassion. We talked about failed relationships and trauma responses. We validated and celebrated the humanity in each other while refusing to acknowledge the same in ourselves. We talked about our broken parts in the context of a failed relationship while inside I was connecting the dots. The overexaggerated loss I felt in the moment was a culmination of all the loss and the hurt of the last few years. And then I was sobbing. It felt like the floodgates had opened and the tears would never stop. I was sad about losing the baby. I was sad that my ex and I never got closure. I was sad my aunt had died a month before my miscarriage and she wasn’t here to see the woman I’ve become since then. I was sad my womanhood had been the cause of so much pain and hurt in my life, because it also inspires and drives me forward. I was sad I’ve been so sad for so long and couldn’t face it. My eyes once again were swollen, grief-stricken tomatoes. My body shook and I gagged as snot spewed from my nose. It wasn’t a pretty cry, and I wasn’t sure that it would ever stop. Eventually, I left, but barely made it to my car before I started again. It would be 6 a.m. before the tears finally stopped.

It’s 6 p.m. now. I’ve reached out to friends for love and kindness. I called coworkers and got my day covered so I could rest. I slept. Spent too much money getting mediocre wings delivered for lunch. I took the day to be kind to myself. I cried a little bit, but nothing like the night before. Honestly, I don’t know how long it will take to shake the emotional exhaustion and fog I’m feeling. But I do know this: Last night was indeed rock bottom, but this isn’t the first time I’ve been here. My swollen tomato eyes have always felt all of the things my grief can’t turn into words. In those moments where the ground has fallen out from under me and I’m in an overwhelming free fall of tears, rock bottom has always given me a foundation to build myself back up from. So that’s where I am, both sad and ready to rebuild.