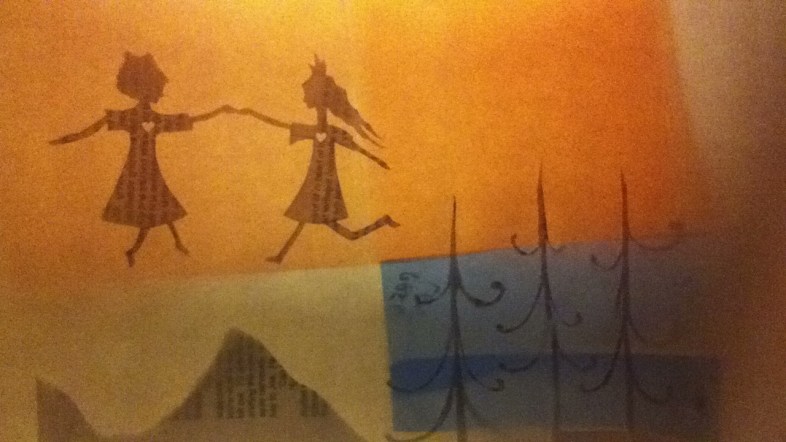 Last Christmas day, my best friend had a baby.  She was the first proper, close friend to have one of those. So there I was, still losing my debit cards every time I drank more than three glasses of wine, unable to organise my important papers in to anything more than a precarious pile on my desk, and suddenly one of us was about to become responsible for a human.  And that felt huge.

We’d been friends for some ten years, and although (obviously) I was over the moon, I couldn’t help wonder what our friendship may become on the other side of her motherhood. This was going to be the biggest change our friendship had ever faced, and I wondered how we’d transition.

Over the following months we (together and apart) became increasingly excited, we knew that she was having a girl – Lottie, and couldn’t wait to meet her. Two days before Christmas, Em went in to labour, it looked like Lottie was going to arrive just in time for a visit from Santa. I decided to go and buy her a Christmas present, but everything I found was so ubiquitous and not in any way memorable.  I went home empty handed, and instead came up with the idea of writing a blog for Lottie over the first year of her life, and boom –  ‘Auntie Spudge’s Life Lessons’ was born.  A melange of different lessons learnt by her mum and I over the years – everything from ‘Vote’ to ‘Never paint a rented property’ to ‘Credit cards are not free money’, all the stuff you wish someone could have told you before your early 20s, but never did.  It was something for the three of us to share, and although I didn’t know it at the time, it would come to bridge the transition from friends, to parent and auntie – still friends, but with a new way of being.

I have friends that have lost friends after they became parents, because the gap felt too wide and they drifted.  This didn’t happen for us, but here’s some stuff I learned over the last year from being a (sort-of) auntie, and I’m relieved to say that nothing’s really changed much at all!

1. Conversations will be interrupted. This is a given. Just go with the flow. It doesn’t mean your friend isn’t interested.  Obviously. Hold the thought and pick up where you left off later, or perhaps you’ll realise it just wasn’t that important anyway (I often do…) . In fact, I’d say conversation is about 75% more productive, as you don’t bother with the chitter-chatter like you used to, instead you dive straight in with the important stuff while you have the chance.

2. There will be moments where you both just sit and stare at the baby. Enjoy them.  I used to feel like ‘why aren’t we talking, is this awkward?’  The answer is no, it doesn’t have to be awkward.  Babies are miracles, we are all miracles.  Enjoy those moments you share marvelling at the miracle (AKA the baby).

3. You may have to hear about the birth, in detail. (I actually haven’t, other than a text from Em while she was in labour saying:  ‘Never do this, it’s the most painful thing ever!!!!!!!’) If they do decide to share, then listen.  I have never given birth, but I imagine it is as traumatic as it is wonderful – it’s HUGE, and something that may need to be talked about, so give your friend that space.

4. Some conversations will involve buggies or colic or breast feeding or all three, and you will realise that your worlds have suddenly been flung so far apart, at moments you can’t remember what it was you had in common in the first place.  Don’t panic, it’s not the end of your friendship, you are suddenly in very different places, yes, but trust that all the stuff that bound you together in the first place is still there, it will always be there.

5. Try to give friends as much notice as possible of social events.  Gone are the days of ‘meet you in the pub in twenty.’  And also, don’t stop inviting. “Oh, we’d better not invite [insert name of friend with baby] because they probably won’t be able to come.”  The chances are, they may not, but I’m sure it’s nice to still be invited and not forgotten.

6. Offer to go round and cook dinner for your parental friends. Anything that involves you going to them, rather than them coming to you, is easier.  And babies go to bed early, leaving lots of time for mums and aunties, and dads and uncles to drink wine late in to the night (or beer, or tea, or whatever).

7. Give a birth / baby shower gift that includes all three of you (or four if you’re good friends with the other parent too). It could be anything, you certainly don’t need to spend a fortune, mine was the blog.  Yours could be a photo book or a day out for you all.  I love homemade things, but that’s just me.

Realising you’re no longer the new generation is quite a wake up call, but seek solace in the fact  that the new sprogs popping up left, right and centre will offer hours of entertainment and fun. Auntiehood (or Unclehood) is awesome. Babies are equally as awesome.  And once I’ve organised the important papers on my desk, and gone for an entire 12 months without having to replace a debit card, I may consider joining the land of motherhood – one day.  Perhaps.

Keep up with Amie on auntiespudge.wordpress.com

120+ Funny Nicknames For Your Best Friends

5 Reasons Why You Should Date Your Best Friend

I’m Sorry If You Thought Karma Was Your Friend