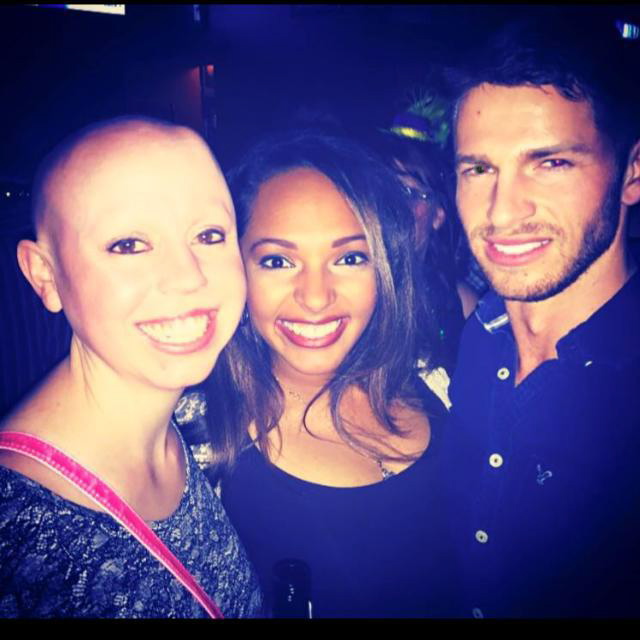 One day, when my younger sister, Rochelle, was a tiny little girl all of her hair just started falling out and didn’t stop until it ALL fell out. We’d brush her long blond hair and chunks of it would just fall to the floor. It was insane. Turns out, she has alopecia, a rare hair loss condition where the immune system attacks hair follicles. There is no cure. Most people who have alopecia get bald spots and their hair grows back – it’s called alopecia areata. Rochelle has alopecia totalis, it’s where you lose all of your hair and chances of it growing back are slim.

We’re a tough lovin’ family, the type who is like, “Oh. You have a problem? Good, maybe it’ll help build some character. Don’t feel sorry for yourself!” so we never coddled her or made her feel different. But, we all know that she has been going through this silent struggle, she hit a really rough patch in high school and now that she’s a young adult I wanted to dig in and see what it’s been like for her emotionally, because I’ve never really asked.

When were you first diagnosed with alopecia? 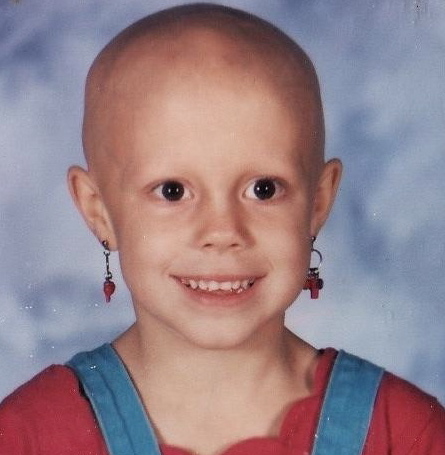 I was 3 years old, I had long blonde hair and it just all fell out. I handled it better than my family, because when you’re 3 years old you don’t care about anything but playing outside and suckering adults into giving you candy. I guess my family was pretty upset but I don’t really remember.

Do you remember how your friends and family responded when all of your hair fell out?

My mom’s always been very cool about it. She doesn’t really talk to me about how she feels about having a daughter with alopecia, but she’s very supportive and accepting. She recently told me that she couldn’t believe it when the doctors told her I had it. A dermatologist said “don’t spend a lot of money on treatment, there is no cure, and when there is a cure you will know.” Another doctor said there’s a 5% chance that I would get my hair back and I should invest in wigs. My mom has taken me to naturalist doctors in Las Vegas, the #1 dermatologist for alopecia in Denver, we’ve tried steroids, special shampoo, crying and praying, but nothing helped. My family became very protective of me. My sisters are always yelling at people who say rude stuff to me.

What was it like being a teenage girl with no hair?

It was awful and amazing, if that makes sense. Bad and good and weird. When you don’t look like the average girl, especially in high school, it’s hard. Hair is such a big deal to girls. They’re always getting their hair done and talking about it and obsessing about it. I couldn’t do any of that. Yes, I know I could have worn a wig but I didn’t want to, I wanted to be myself. Teenagers go through a stage in life where they’re finding themselves, and I just remember hating that time. Kids are mean to each other, maybe they’re mean because they think it makes themselves look better. It makes them feel superior and it’s so wrong. I was a girl with no hair, so I was an easy target. The girls were mean to me, and I felt like guys were scared to ask what was wrong with me or see past the fact that I didn’t have hair. I switched high schools because a group of girls picked on me. They picked on me because I had no hair, and they picked on me because they were jealous of other friendships I had. Looking back, it was so dumb but high school had to be the hardest time in my life. I realized that the people who care about me don’t mind that I don’t have hair. I learned that everyone struggles with their appearance, it’s just not as public as what I go through.

I think it’s incredible that you choose to not wear a wig. I know sometimes people encourage you to wear one. What made you decide not to?

I love not wearing a wig. I’m proud that I chose to be myself. Plus, I don’t remember having hair. I was so young when this all happened, so I don’t miss having it. As a kid my family never pushed the wig thing, they loved me for me. When I was in high school I wished I would have worn a wig, because I wouldn’t have looked so different. I might have fit in a little more and not had to deal with so much ignorant crap.

How do you feel when you wear a wig?

When I put on a wig I feel like a totally different person. I get confidence that I normally don’t have. I look normal to the average person and I feel normal – but I’d still rather be myself. I don’t want to hide it. A funny thing is, when I have a wig on and it’s messed up or a little crooked, people won’t tell me because they think it’s rude – but it’s not! Help a sister out, if her wig is crooked let her know!

I know sometimes when I’m with you in public, people stare. Do you think they assume you have cancer or do you think you are some edgy girl who is making a bold statement? Do you care?

I don’t care for the most part, but it’s a little of both. I would say 9 out of 10 people think I have cancer. I’m actually shocked when someone asks me if I have alopecia. They usually only know about alopecia because someone close to them has it. They like to tell me their personal stories about alopecia, I listen and tell them I’m sorry and let them know it’s not all that bad! When people ask me why I have no hair I simply explain that I can’t grow hair follicles, it’s an autoimmune disease. If little children make comments, it doesn’t bother me and I let them know that I have a hair loss condition. It really makes me mad when grown adults make rude comments, it’s like REALLY? How about I make a comment about how you wear pajamas to Walmart? They don’t realize that I can hear them and I have feelings too. I have learned to ignore them because they don’t mean anything to me, and have to accept the fact that some people are just either flat out dumb or mean.

What are some of the worst things people have said to you?

One time I was working with my sister Autumn at my mom’s restaurant. A guy came in and said, “I can’t eat here.” Autumn asked him why, he said because it is a disgrace for a women to not have hair. He just kept repeating himself. Autumn said, “We have the right to refuse service to you” and kicked him out. Everyone was in shock that he said that to me, and he just kept yelling about how I was a disgrace. Autumn went into big sister protective mode and went outside and got in his face. He was still yelling about how I didn’t have hair and Autumn yelled, “Do you think I like looking at toothless trash every day? No! Now get out of here!” I pulled her away and told her to go back inside, then she sent the entire kitchen staff outside to kick his ass, but I wouldn’t let them. It’s really hilarious now, but back then it was sort of unbelievable. It reminded me how many people care about me and try to protect me from mean-spirited people.

How do you think having alopecia has benefited your life?

I feel like I attract people who have an open mind, people who see past the alopecia and truly love me and want me to be happy. I only know two other people who have it, so I’ve had to develop an independent way of coping with it. It’s made me strong. A lot of people feel sorry for me, but they don’t need to. I don’t have hair, so what? I have an amazing personality and a rockin’ body. I think the Universe or God or whoever only gives alopecia to people who can handle it, and I’m handling it.

What advice do you have for other people who have alopecia?

Oh wow, my advice would be never believe when someone says you’re not beautiful because you don’t have hair. Always remember that when someone says something mean, they have a problem with themselves and has nothing to do with you. Always keep your head up because it could be a lot worse. You’re not dying, you just don’t have hair. Try not to get mad at strangers out in public, they only ask questions because they are uneducated about Alopecia. Surround yourself with cool people and focus on what you love to do in life.

Amber is a stand up comic, writer, and actress. She has built a Twitter following of over 40k users, and her tweets have been featured on shows such as Jimmy Fallon and Ellen, among others. She co-created #nitTWITS, a Twitter-based web series, which features writers and performers from SNL, Modern Family, The Office, and Conan. Amber has written for Cartoon Network’s animated sketch series MAD, and Adult Swim’s Moral Orel. Tozer has also made appearances on Last Comic Standing, and in the Montreal Just for Laughs Festival. She sold her animated series “The Tozer Show” to FOX ADHD and was recently at the prestigious 2014 Bridgetown Comedy Festival in Portland and will be featured at the High Plains Comedy Festival in Colorado this summer.