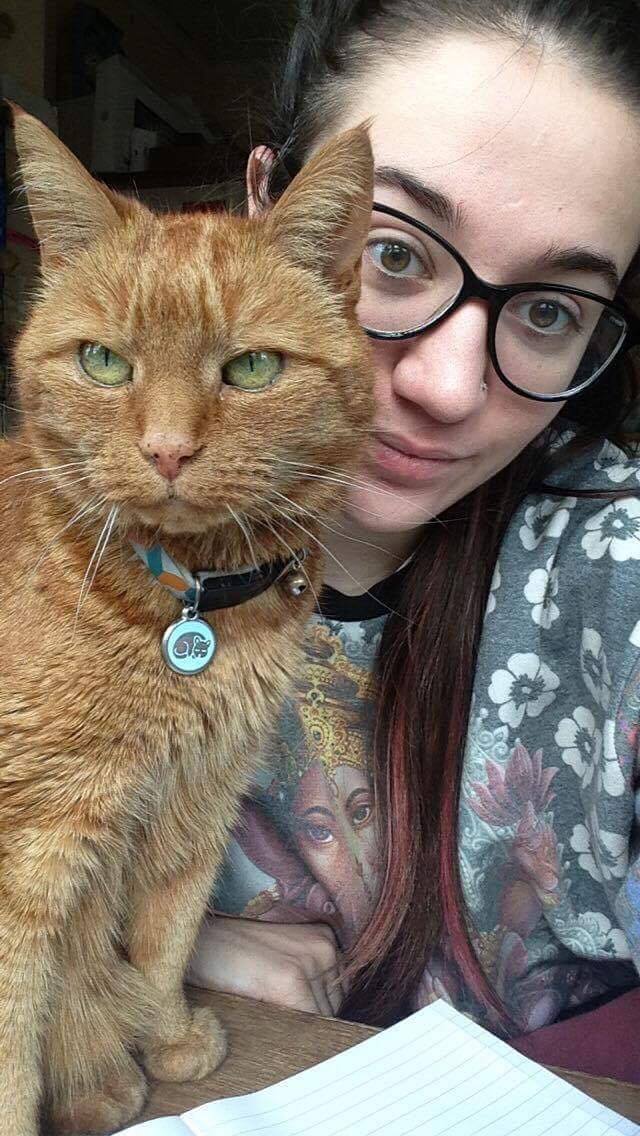 In 2004, my family adopted two five-year old cats called Milly and Grace. Being ginger and females they have an extra chromosome making them prone to eccentricities. In our cats, Milly barked like a dog when she was lonely and had no awareness of what was going on around her and Grace barely meowed at all and was very sensitive to the atmosphere around her. I was only eight at the time so, two fluffy ginger cats were perfect for me to cuddle and play with especially as I was an only child. However, Grace took a particular liking to me and we soon became “best friends”.

By “best friends”, I mean that we slept in the same bed and she would follow me everywhere. She came to greet me at the door when I came home much like a dog would and I would chat with her for hours about my day and my friends and school and she would sit and listen. When I was ill, she would sleep by my head and not leave my side until I was better; a clear sign that I was actually ill and not just trying to bunk off school.

When I cried she would get upset too, making those rare sad meows and licking the tears off my cheeks. For a young child who was quite anxious and sensitive anyways, having a furry friend who would always listen and love you no matter what was a comforting thing.

As I tumbled through my teenage years, I became more and more troubled and developed severe depression and anxiety by the age of sixteen. The feeling of complete hopelessness set in and soon I felt as though I had no one to talk to or anyone I did have, wouldn’t want to be burdened with my sad shadow of a self. Grace knew something was wrong. She would follow me around the house, lying next to me in bed as I cried myself through sleepless nights. She would sit and watch me as I pushed my food around my plate pretending I was going to eat it when in my mind I knew I wasn’t. She would even bring me her little cats treats, resting them on my lap. In the mornings, she would climb up on my chest, snuggling down and resting her head on my face as though she was cuddling me. The times I would lock myself in the bathroom, allowing the dark parts of me to run loose, she would stick her paw under the door to remind me she was there or even follow me in before I locked the door so sit with me.

It doesn’t seem like a lot, and some may say that it’s just a coincidence. Some say cats are self-serving. But to me, it was a comfort. It was a comfort to know that a small furry being loved me when I couldn’t love myself. It was that spark of joy every time she came for cuddles or snuggled down next to me at night that kept me going, that reminded me I wasn’t alone, that I wasn’t a burden and that someone needed me.

The Mental Health Foundation did a Pet Therapy study in 2011. The results showed that out of 600 people, 87% of cat owners found that having a cat improved their mental wellbeing and that they could cope with everyday task much better. A third of the cat owners said that even the activity of stroking a cat made them feel calmer and more relaxed. Cats provide an everyday purpose and the feeling of being needed, something which many people with depressed feel they do not have. They also help with social interaction, trust and developing relationships which people with anxiety have great trouble with. Now, 1 in 4 people experience mental health problems every year in the UK and mixed anxiety and depression is the most common mental disorder. Little furry additions to people’s lives can be small steps (or paw prints) towards the beginning of the recovery and long-term coping process.

Even though she was seventeen years old, she would still hobble her way upstairs every morning to go into my room and cuddle me and she would still limp towards the front door to greet me. My cat reminded me of the innocence and pureness in life among the chaos and darkness. Unfortunately, in September 2017, Grace passed away in her sleep surrounded by love and comfort. My cat saved my life when I wanted it to come to an end and she still did to the day she died.