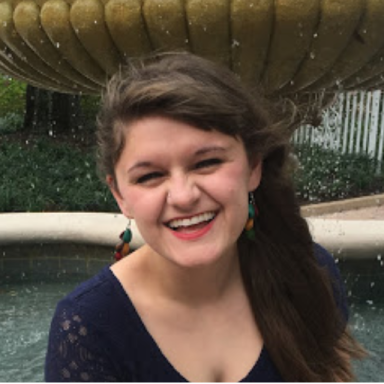 I’m 24 years single; let’s start there. Most of the year, I’m pretty content with that relationship status (apart from occasional gusts of emotion threatening to make me burst into song, a la cartoon princesses and such).

But with the arrival of February comes not only the holiday most keen to remind me of how very single I am, but heaps of marketing designed for couples. Candy hearts and chocolate boxes. Teddy bears professing affection and giant crimson bouquets boys bought last-minute. Hearts everywhere and entire aisles in stores plastered with pink (my least favorite color, independent of February 14).

Valentine’s Day can bring out the worst in me. And I have a hunch that I’m not the only one.

Can I just gently suggest that, if someone in your life is newly or serially single, mid-February might be a weird and/or complicated time for them? (And maybe it’s not! But… the possibility certainly hangs in the air.) With 24 or so single Valentine’s Days under my belt, here are four things I’d suggest that the single person in your life maybe (probably) doesn’t need you to say to them – especially if you aren’t single.

Here’s the thing. As much as you may feel that this is a show of empathy, sympathy or solidarity with them, these kinds of statements kind of ring hollow at a time of year when every shred of consumer culture around them is shouting that they are incomplete without a significant other – and it just makes you look like a fraud.

While yes, it’s true that people are messy and no relationship is perfect, at the end of the day, many (if not most) of us would like to come home to someone who knows and loves us better than anyone else. So downplaying relationships sounds ingenuine at best and condescending at worst. It’s not as helpful as you think it is, and the commentary is probably just plain unnecessary.

It’s highly possible that the rabbit from Bambi said it best: “If you can’t say something nice, don’t say nothing at all.”

Instead, try: Reminding them that they’re enough and complimenting something about them or what they’ve accomplished lately, as a mirror to how they’ve grown and what a fantastic, deserving person they are of happiness… without feeling the need to bring their lack of significant other into it.

2. “The secret is, you just have to marry your best friend.” (See also: [insert any well-meaning but totally empty relationship or dating advice here])

Every time I’ve heard or read advice like this, my gut reaction (barring overall decorum and a generally positive social demeanor) is to reply, my smirk dripping with sarcasm, “Oh, is that the secret I’ve been waiting for this entire time?! Finally, someone has descended from on high with the treasured piece of wisdom that will solve all of my problems for every Valentine’s Day here on out! Thank you, sweet patron saint of romance!”

Look, I get it. These tropes make sense and have stood the test of time for a reason. But if someone is single on Valentine’s Day, chances are good they either (a) tried dating a best friend and it didn’t work out, (b) haven’t found a best friend that is dateable for one reason or another, or (c) are perfectly content not marrying their best friend right now. So your well-intentioned advice probably isn’t the life preserver they’ve been waiting their whole life for. And just might end up being in the way.

Instead, try: Asking them about something they’re looking forward to or passionate about right now! They have a life outside of dating and are surely a vibrant, interesting enough person that they won’t be swiftly “rescued” by your one piece of relationship advice that will turn the tide forever.

This may not be a universal rule of thumb, but may I recommend that a generally safe go-to policy is that, “If someone hasn’t explicitly asked you for your assistance in changing their relationship status, don’t try to give it.”

If they haven’t tried dating apps, they probably don’t want to or aren’t ready yet. If they have, they know it’s a mad mad mad world out there, and one that often takes more than it gives. And if they haven’t handed you the reins to set them up on a blind date or to matchmake in any way, you’re setting both parties (and, eventually, yourself!) up for discomfort if you decide to go ahead and do it anyway.

Instead, try: Asking them about their hobbies or go-to activities without an agenda. Let them share about people they’ve met, connections they’ve made or friends they appreciate. (If they ask you outright if you know anyone else who’s single, tread lightly and offer your support, but don’t pressure them and certainly don’t make a big push for a Valentine’s Day romance. That’s just… a bit much.)

4. “Everything is going to turn out okay.” (See also: “You’re going to meet someone when you least expect it, mark my words.” “There’s someone for everyone, you’ll see.”)

While it’s true that, yes, everything is going to turn out okay (in as broad a sense as possible), saying it to someone who’s frustrated (or ambivalent) toward being single around Valentine’s Day makes it seem like being in a relationship in some far-off, future day is what’s going to make it so. It seems to boil down their worth and the beginning of their real life down to something they don’t have yet and don’t know when (if ever) they will have it.

But whether they’re interested in dating, marriage or romance of any sort, their life doesn’t begin “someday.” It doesn’t begin when they put a ring on it or when they have someone to share a candlelit dinner with on February 14 or when they find the person whose weirdness is compatible with their own. Their life starts today – it’s happening right now.

And maybe they’ll find that Someone; maybe they won’t. But either way, they’re not just going to be okay. They’re going to be amazing. They already are.

Instead, try: If February 14 is a little extra hard for them, don’t try to placate them with platitudes. Encourage who they are today. Share a favorite friendship moment with them. Laugh with them or give them a cheesy cartoon character valentine.

Remind them they’re loved, no matter what. Every day of the year.