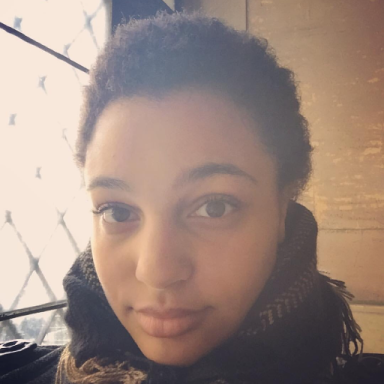 Last night, in my dream, I caught myself carving into someone’s door. They lived in a cemetery; the door was broad, with white-washed, recycled barn wood closing in on a little L-shaped cottage. With my knife, the carved shapes came deceptively easy, each cut a flourish.

My focus was tantric, a careful love filled with lonely passions ignited, my body every bit the question flowing from the tip of my knife. I could feel the tense presence of the house’s occupant, a ghostly glance from behind black windows. It was early morning, the light a blue-gray and the scene replete with a dew-heavy roiling fog descending in wisps and vapors.

I had no real conscious thought of the symbols that formed before me until a flat-palm sound jarred me closer to the surface of myself. The occupant’s annoyance, and also fear, was clear as they knocked once from their side of the door. Still, I felt no shame for my act. In fact, I felt strengthened, aware finally of the importance of the work before me. I gave the door a respectful knock back and it opened.

A small woman—blanched, dry-skinned, a slight redness around her T-zone, and a swath of radiant copper-red hair slicked back into a tight and unforgiving ponytail. You could smell the damp weight of her exhaustion. With the door open, I carved the last symbol—an elongated infinity sign sitting upright as an “I.” The message finally came together:

So I asked her. It may have been my own existential question, but I needed this close-kept woman to see something. “Who are you?” She looked at me with big eyes, brightened by surprise with a hint of confusion. They then glossed over, immersed in a pool of memories.

”I was a mushroom in my first play,” she said. Her voice was smooth like dusk and slow. But no more sound came from her, only images and the vague imprint of softly cresting classical music. I saw a miniature her, stuffed into a felted and forest-green mushroom stalk, skinny stockinged legs protruding from the bottom and hair hidden by her large mushroom cap. There were other mushrooms, plants, and animal children on the stage around her. She was shy, stiff, and perhaps without lines—but a spark had begun to grow.

The whole world unfolded from that stage. I was granted a cinematic, God’s-eye view of her story. I saw her, now a sprightly preteen with long legs and an as yet untempered obsession for grace caught in a glamorous leap. Her black leotard and petal-like chiffon skirt soaked up the spotlight. You could see the spark become a flame, spreading throughout her still unformed body, bending her spine just so, pointing her toes and finding the limits of her fingertips. Her eyes were closed. She was lost in the act, and her peers were now the shy ones, nervous hands clutched before their locked knees.

Now, college. Studious, dedicated to her craft, mathematical in her focus. She still wore her black leotard, but her hair was lighter, imprisoned in a perfect sock bun that seemed to pull at her temples. The fire that fueled her was so thin that she felt cold, replacing her wild desire with desperate expectation. The fire had, in fact, become like a knife. Nevertheless, a romance ensued. Mr. Tall, Latte, and Mostly-There grinned at her from the doorway of her minimalist dorm room; within a year, a child was found blossoming in the cusp of her womb.

What happened next was a lesson in true beauty. The air of passion had not once dissipated, permeating thickly throughout the experience, and life after second birth gave no exception. The literal dance which had been a marrow in her bones found new expression in motherhood. Her pursuit of grace grew less and less calculated. It was as if she had blown the lid off of her expectations; whereas before grace and flight were physically confined by the limits of her body, which she had found was destined to fail her—she freed them, suddenly able to taste the wind currents in her life and determine which ones would take her higher and closer to her dream. The spark, given unlimited air, funneled through the awakened channels of her body, became an unceasing light.

We returned to the small cottage in the cemetery. She was brighter. Her hair had been freed and her skin had softened, glowing and supple with the essence of recaptured youth.

“You were a mushroom in your first play…”

I was in ecstasy, filled with the grace of her story. “I need to read your book,” I said, finally looking back at her. “Or to watch your play. To see you dance.” I could imagine her choreographing a multidimensional modern dance, spinning white tulle and black leotards building to a crescendo on the stage where her story began. Surprised again, I could see the cogs turn. The spark had come back to life.

”But this is just one story,” I cautioned. “Who will you be tomorrow? Who will you be when you open this door after today’s story has faded?” Quick glimpses, then, of stories within stories, collective works that spanned the spectrum of emotion from dark and grainy to an ethereal sepia and so on.

Still thinking, she closed the door, retreating back into the darkness and becoming less person, more presence. I took one last look at the carving, still filled with the focus I had imbued it with, but confusing me the closer I came to wakeful consciousness. I floated away from the foggy scene, slightly annoyed, wondering whether or not this message was truly meant for me.

Wondering how I could possibly decipher it.

I choose the unconventional path. To forge my own. To dream big.