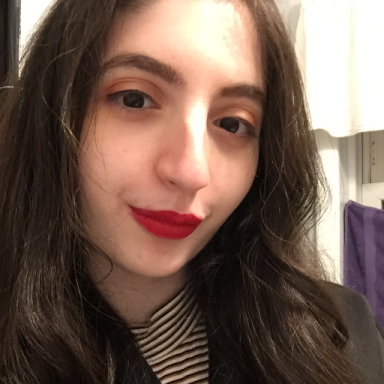 There are a plethora of lies single people tell themselves when they’ve never been in a relationship. I would know. For all of high school and the first few years of college, I had no prospects and hardly any attention from someone compatible with me. Zilch. Nada. Absolutely nothing. So I told myself a number of lies when thinking about my first relationship: I wouldn’t involve myself with someone my friends didn’t approve of; I would be ok dating someone for a month at most at this point; being single isn’t all that bad; I don’t mind waiting.

I craved attention. It got to a point where I would daydream about men who would do the littlest things for me, such as hold the door or laugh at a joke I said. Soon thereafter, my fantasy boyfriend and I would pose for our own staged versions of rom-com posters; we’d share a blanket next to a warm fire, laugh while feeding each other fries on a park bench, and always depart with a kiss. These pipe dreams were coupled with a larger issue rooted in reality—I had friends who seemed to always have men on rotation. These friends are like fire, incandescent and radiant. They could draw men to their light like moths. Watching this happen time and time again while I had no light of my own put me in a dark place for longer than I want to admit.

Combatting these feelings with optimism didn’t help much. While de-stigmatizing the idea that it’s odd to have never been in a relationship by a certain age and shutting down the “being single is okay” (yes, of course being single is okay, but it doesn’t feel that way when that’s all you’ve ever been!) spiel did well for my self-esteem, it didn’t do much to suppress the cravings I was having for an emotional and physical connection with someone. I still wanted to unabashedly take photos of my partner and I several times a day as proof that I could be loved—not for other people, but for myself.

The only piece of advice on finding a relationship that has ever been fruitful for me is: don’t stop believing in love.

Believing in love is reminding yourself that love exists even if you can’t feel it. It’ll take practice and faith. You’ll need to start living in the present. You’ll have to remember that you are worthy of love.

Personally, I decided it was time to start believing in love as a New Year’s resolution back in January of 2018. It was a small change I was prepared to make for the sake of ameliorating how I saw the world and my place as a woman who had never been in a relationship. It was a way to fix my wounds when bandaids failed to. By opening my mind and trusting that love exists for all people, I found that, in just a few weeks, I felt happier. I felt stronger. I stopped putting myself down for being single.

The lesson here isn’t how to find love in a world where it exists. I cannot tell you what stones to turn over to eradicate failed dates and holidays spent alone. Searching for it can be exhausting and coming up empty-handed is a gateway to placing blame on oneself (when it’s not your fault at all!).

The real lesson is to simply believe. Even when there are moments when faith will test you. There will be times you’ll want to ask, “I believe in love but why is being single so tormenting?” Believing in love isn’t about wondering when it’ll happen to you. It’s a statement that stands on its own. It doesn’t include turning pessimism and self-torture into a doctrine that exists in the world in an attempt to mitigate the pain. In order to truly, wholly believe in love, you must believe in it without doubt. Celebrate it, let it swim around you like germs and dust in the air. Trust that it’s there and will reach you soon.

Believing in love is a never-ending long and winding road. As I put in the work traveling down it, I fought off bouts of loneliness, lessened feelings of discouragement over my lack of experience, and grew more excited for living precariously. It made dating easier. I forged better connections with people. Most importantly, it was only when I stopped waiting for love to fall into my lap that love came to me in a way I couldn’t have anticipated it to.

You want your Mr. or Mrs. Right to think: “I can’t believe this amazing person is dating me!” The right person will one day. Those who believe in love find it.

Alyssa shares a birthday with Beyoncé.