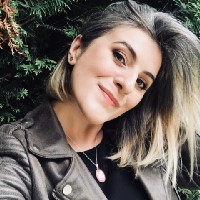 I’ve had my fair share of relationships; I think about my twenties, and I cringe — not because of my taste in boyfriends, but because I was such an insecure, hot mess.

I’m pretty open and honest and like to pour my heart out. The irony is that I’ve always attracted the most closed-off, introverted people on the planet. So it should come as no surprise that I was often ghosted or on the receiving end of the silent treatment, and it made me go absolutely insane.

I had to voice my frustrations, and that’s what fighting was for me: a monologue of criticism, blame, and anger. I said hurtful things, anything to jerk a reaction, anything to get the other person involved in a dialogue, even if that meant fighting. After all, how can you be in a relationship with someone if you’re not able to “relate”?

It was an incredibly unhealthy and abusive way to behave, but I didn’t know better. I was suffering, and that’s how my hurt came out: through mean words.

Now that I’m older and wiser, I hold a deep respect for anyone who is in tune with their feelings. I realize that we can’t all be an open book, but it sure helps with communication. I mean, how can I even trust someone who won’t let me in — even a little bit?

Then, after a failed decade of trial and error with men, I came across this easy-going, forgiving, honest, and fun person who is now my husband. To call our relationship “effortless” would be an understatement.

But the effort is there, hidden, on his part, to be gentle and calm whenever I get angry and vocal. And I make a conscious effort too, by noticing his words and interrupting my state, even though it would be so much easier to throw a tantrum.

He gets me, and because he speaks about his feelings, I get him too. It’s quite miraculous, really. And here are some of the things he says to make all the anger go away.

The first time I heard him say this was on a long drive to his parents’ house. We were in a phase of our relationship in which I was comfortable enough to act like myself and reveal my emotionally unstable girlfriend side. Not a pretty sight.

I can’t remember why I was upset. I mean, do we ever remember stuff like that? We recall the arguments, though. Except that this time, there was no argument — only my partner’s firm, but loving voice, standing up for himself:

My mind went blank. I mean, of course, I realized it was hurtful, but never before, in the midst of heated emotions, did I ever stop and think how the other person felt. Because they never said a word. Or they left the room.

But no, he stood his ground and let me know that whatever I was doing wasn’t okay. It still blows my mind with its simplicity. And it still interrupts my toxic pattern instantly, to this day.

Because he makes you get out of your head and see the other person.

Because it’s confident and shockingly honest.

“Let’s sit down and talk about this issue.”

What makes our relationship thrive is the fact that we never leave a conflict unresolved.

While minding my tone of voice and dropping blame and criticism might be enough to disarm day to day frustrations, every relationship reaches more sensitive topics. Whatever they may be, you need to be on the same page with your spouse.

My husband is all about fixing things, like all men are, which can get annoying. But when I act like he’s upset me in any way, he refuses to let it go. He refuses to let me sulk like a child. He challenges me to sit down and calmly discuss my feelings.

I can’t storm out of rooms anymore (partly also because we live in a tiny house and there is only one room). I can’t plan my revenge. I can’t say hurtful things to him because they would be lies. Nope, I can’t do any of that. Our fight is too polite.

“Let’s sit down and talk about this.”

He makes me sit down and air out my frustrations. He listens. We take turns speaking. What else can I say? He’s a freaking unicorn.

Partly because of the unicorn thing.

Also, because he hates seeing me hurt.

Because he is open to feedback.

Because he is willing to change certain behaviors if he can help it. And so am I.

I feel like more than half of the entire world’s fights are about housework. Or at least they get triggered by housework, when in fact, they’re about feeling overwhelmed and deep unhappiness.

I hate cleaning, and I used to take it out on my husband. I even have a pattern, and it’s becoming entirely predictable. I can already imagine a scenario where I get all riled up.

First, I notice the mess. Next, I blow it out of proportions in my head — I think about all the hours it will take me to clean it, I magnify all the stains and specks. I proceed with hating my life, as I gather my last ounces of energy to stop procrastinating and start doing something, anything.

Next, after all that fails, I start thinking about the leaky shower hose, the damaged baseboard, the unruly backyard, and decide: it’s all my partner’s fault. He doesn’t help out. Yep, he’s the source of all my problems.

But right before I start blaming (because he calls me out on that too), my partner sees my obvious pattern unfolding and stops me in my tracks:

How can you argue with that? You can’t.

“You never vacuum,” I say, in an effort to maintain my angry thought process.

“Yeah, well, you never do the dishes,” he says, foamy dish sponge in hand.

And I can’t argue with that either. That pretty much sums up our fight and kicks my butt into gear.

Any couple will divide chores according to what suits the individual, and that’s fine — it’s not about being equal, it’s about making things work.

Because he doesn’t shy away from hard work.

Because he picks up the slack whenever I get sick or don’t feel well.

Because he understands me when I get upset and overwhelmed about housework. He knows that it isn’t about him.

Because he’s not a misogynist. Thank God for that.

Replace that with ice cream, tea, coffee, or your drug of choice. I’m sure my husband would offer any of that to snap me out of a funk.

For now, wine is my pacifier. Whenever I come home from work, and I’ve had a hard day, my lovely husband pours me a glass of wine, and we make dinner. Okay, fine, he makes dinner.

My husband has this wizard-like ability to predict a crisis before it’s coming. I think he sees it on my face. So he resorts to the thing that he knows will make me feel better.

I’m struggling with this, and I’m sure that “Glass of sparkling water and lemon?” wouldn’t have the same appeal. I’ll stick with my nightly glass of wine until I find another instant relief for my anxiety. But that’s a topic for another time.

Because it’s so nice of him to ask.

Yes, he is real, I didn’t make him up. Yes, he will read this and disagree, because, in all honesty, he doesn’t manage to defuse every single fight — more like 90%.

Life is good. It’s taken me a long time to adjust to this new, calm way of living. After all, I had no role models growing up. My parents fought, my brother and I fought, and fighting was pretty much the only way I ever knew how to express my frustration.

With tremendous gratitude, I can say this now: the only fight we need is fighting for each other’s happiness.

Doctor by trade, writer at heart