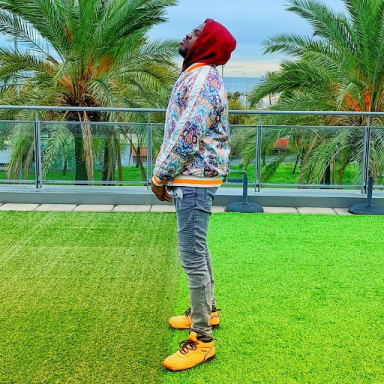 My two children move like air—everywhere you turn, they’re there. Their favorite hideout is under the dinner table, stacking and knocking over dreams. They are always together, taking turns. Taking turns picking a fight they are not sure of winning, taking turns playing with their imagination, taking turns turning a cool breeze into a raging storm.

One of their pastimes is making blanket forts in the living room. They use all the blankets and duvet sets they can lay their stew-stained hands upon. Sometimes it is not stew, sometimes it is ketchup from the kitchen or blood from injuries sustained from tripping over wild excitement. They are creative when it comes to rearranging the house. The Mrs. said I should stop using “being bad as each other” or “thick as thieves” to describe them. She said they are not turning the house upside down, that it is all part of their learning and exploration stage. The Mrs. has a lot to say when it comes to the children. Some of what she says I listen to, the rest are chauffeured to me amidst snores.

All the mattresses in the house always feel the unusual breeze anytime they are groped and stripped naked by the children. I know how long it takes to lay the beds every morning. I know the mattresses only have to blink to realize they’re butt naked, to see their dignity and modesty hurriedly walking out of the door in the hands of kids who think themselves gods.

I’ve seen two wrecking balls fight—it was not a pretty sight. On the battleground lies the couch and dining chairs all thrown together to form a huge heap clothed in blankets and duvet sets. The pillows are hung like a mistletoe in a convent. They are feeling the disturbance of the occasion, but the only lips the nuns will be kissing is the bible’s.

They always have different names for their spectacle. That’s what I choose to call it—a spectacle. Once they’re satisfied that they couldn’t possibly make the tent anymore ghastly and dangerous, they will then stop the clock to catch a minute. They pace around their contraption, admiring and inspecting. They always wear this recognizable yet identical smile on their faces.

After what seems like forever, I watch them as they fall on their knees and crawl into obscurity. I can see the sun fiercely stabbing through, yet I can’t make out whose limbs and head is snaking through. Suddenly I hear a short, sharp noise that cuts through my pulmonary vein. It is the noise that escapes from my mouth as I stifle myself from having a meltdown. From telling them that playtime is over, it is now time to do something useful or sensible. Like tidying up, like putting every piece of fabric and furniture back to the exact place they found it. Instead, I have now learned how to swallow back the words. Sometimes I have to use a gulp of air or glops of saliva to suppress any misgivings lurking and stalking the route that connects my heart to my mouth.

The Mrs. is right—now I know it is all part of our learning and exploration stage. For them as gods, for me as a father.

A published poet and a lover everything artistic in human and nature.