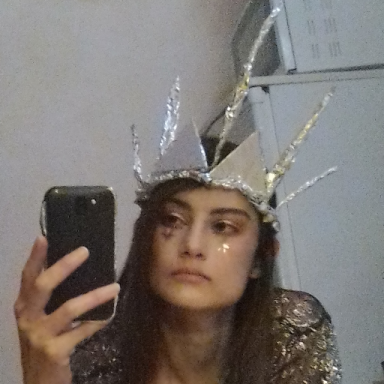 Every time I turn on the TV I see him or his name and am reminded of my former life again…Don Lemon from CNN. I had only met him once—when I hooked up with his friend in his Sunset Strip hotel room.

But I wasn’t. I had just used my friend Meg’s make-up while getting ready in her Valley Village apartment earlier that night. And Don Lemon’s friend looked like Dylan O’Brien; ya know, the Teen Wolf/Maze Runner kid? What else is he in again?

I met Don’s hot friend years ago in Soho. We chain-smoked and drank gin tonics. Then we made out in the back of a cab before I threw up all over the floor. I’d like to take this moment to officially apologize to the cab driver that night. I’m so sorry, I was 20-year-old girl drunk and ran out on the cleaning fee because I was broke in the city and had a Teen Wolf lookalike to fuck.

I had a fake ID and my life still ahead of me. And now as I sit writing this, I wish I could turn back time and do it all differently. But I’m sure I wouldn’t even know how to change what seems to be fate. I was destined to be sitting here alone—a recovering addict still living like a kid. Too young to know shit, but too old to use age as an excuse anymore. I’ve been an addict for over a decade now—I can no longer say I’m just a party girl. I haven’t even been to a party in years and now I don’t know if the world will ever be able to party again.

Timing is key and the perfect imperfect timing when it comes to the worst things seem to become me. My ex-boyfriend is a tweaker who loves to stalk me. And I suddenly understand all the intricacies of Stockholm syndrome. Still, I can’t escape it. He wants to keep me on drugs so he can continue to take advantage of me. I want to keep doing drugs for fun, ya feel? But I’m not supposed to have fun anymore. I’m supposed to get my shit together and grow up.

I planned on returning to New York; the only place I’ve been where I know I don’t need a car. But then the world decided it’s time for a pandemic like the Maze Runner described. And I was ghosted by that guy—I still don’t know why. People just stop talking to you when they discover you’re a sad addict.

But let’s put aside the sad shit and rewind time again. This time I was 22 at the bar Employee’s Only. They’re known for their amazing cocktails apparently, but I don’t remember drinking any of them, although I surely did. All I do remember is a drunk Mark Cuban.

“You’re cute,” he slurred in my direction.

“Thanks,” I slurred back.

And then I walked away.

“Do you know who the fuck that is?” A girl asked me.

I didn’t know at the time.

“Do you know how much money he has?” Another girl asked.

Um…so? I was confused. Like, what did they expect me to do? Rob him?

I gave the bouncer some more weed and took another tequila shot. I blacked out and apparently invited a few people over to my sugar daddy’s Airbnb. I remember coming to and seeing the small group standing there. Then I stripped off my Wednesday Addams Unif dress and passed out on the bed. That was that. My daddy saved my psycho ass once again.

And now I have no daddy, unless you count my aforementioned psycho ex-boyfriend. But he can barely afford the Motel 6 and says sideways shit while smoking dope. The fuck? How can a person be so fucked up? I thought I’d never meet anyone messier than me, but there he stood. He made my insides bleed and told me how much he loves to hurt me. I’m a masochist, but it’s not getting me off anymore.

Fight or flight? My Lil crazy ass will always choose to stand and fight. I watch as people yell “thug life” and then run away. I can’t believe people like that have kids. I want to run away to my past. I wish I had enjoyed it more at the moment…if I only knew. Being in your prime isn’t all that great. You know you have a best by date.

Well okay, time to play. I’m going to be Jessica Jones and he’s going to be bad David Tennant. But fuck, I really do miss him playing The Doctor.

I desire a bar of 13-inch chocolate covered, strawberry sauce dipped banana dick to choke out every last bitch out here who deserves it.

And now I feel homesick for a place that no longer exists. Pop a pill and pass out. It went from a dream to a nightmare too fast to process…and I black out again.