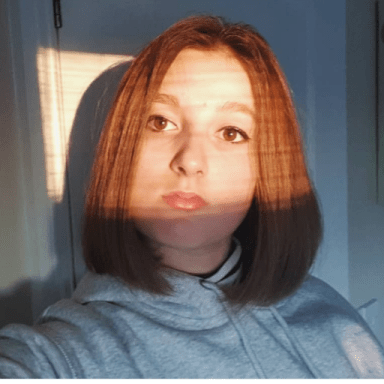 After school, every day, without fail, I would have a bowl of cereal. The routine was well-choreographed and sturdy, as uniform as my cardigan. I would stroll into the house, slipping my rucksack off of my shoulder. Before the books inside could even meet the ground, I would have climbed halfway into the cupboard, reaching for a box of the good stuff.

I was a cereal connoisseur but not a snob. I didn’t see the difference between Tesco’s or Kellogg’s brands. I didn’t care if there was strawberry or chocolate chips in the wheat; if the flakes were brown, bran, or golden; if the well-needed fiber and sugar that would refuel my body after a hike from the school gates to the front door would come in nuggets, flakes, shells, or biscuits; if it was bright purple, beige, or had a hole in the middle of each piece. If it floated in milk and went crunch, then I respected it.

It didn’t matter how many servings constituted a bowl—it was all going in. I would shake the box until I could hear no stragglers. The impersonal nutrition information printed at the bottom of the packaging was as obscure as it was unimpressionable. I craved a bowl—a proper, full bowl with a half-drowned spoon floating clockwise—and so that was what I had. When I scuttled upstairs to start a nickelodeon marathon, the bowl would be so filled to the brim with milk that a flash-flood threatened to slosh over the sides and onto the hideous flared bottoms of my school-issued trousers.

The child that I was, the one scampering out the kitchen without a care, would have been hurt by the ostracization of cereal I later inflicted on the both of us.

When you develop a restrictive eating disorder, you are not just denying yourself today, you are beating down the person that you were, child or otherwise—the one who treated their cravings as opportunities for joy and dealt with their hunger with workmanlike efficiency and happy creativity (chocolate milk with frosties, anyone?).

When my disordered eating manifested into an Eating Disorder, cereal became my number one fear-food. It is the fear-food many people harbor, perhaps because my anorexic voice, like so many others, hates what we loved the most.

For a year, I could not stand to touch the stuff. My eating disorder liked control: rigid, pained, exasperating attention to detail and faux order at the expense of everything else. My eating disorder, when it did let me eat at all, liked things that could be neatly portioned, things that didn’t rattle and tumble out of the box in deluges rather than rations. And it certainly didn’t like breakfast.

Inevitably, of course, the more anorexia feared it, the more obsessed I was. On nights where I was so hungry I couldn’t sleep for longer than a couple of hours at a time, I would have vivid dreams of opening pantry doors, of finishing bowls of muesli and granola and Special K before waking up in a cold sweat out of fear that I had miraculously done so. But I never had, and I missed it.

At my worst moments, the debilitating mental tug-of-war between abject terror and yearning would quite literally paralyze me. I would stand, vibrating with adrenaline, in the cereal aisle of the Tesco Metro by my flat. Sometimes I would stand there for half an hour at a time, touching and prodding different boxes and bags of the stuff—reading the label, holding it, putting it back and looking away in repulsion. I would look and look, then go home empty-handed to exercise.

When I was a guest in a house that kept cereal, I would sweat and grow twitchy and distracted at the thought of someone forcing me to have a bowl. I had a cibophobic preoccupation with milk being off or the cereal itself being stale. Staying at my parents house for a holiday caused me to panic so completely that while they were out for a drive, I marched up to the kitchen cupboard—the same one I used to open so happily every weekday afternoon—and pulled out every single box of cereal I could find. I ripped out the bags, up-ended them over a bin so that every morsel tumbled out, and then hauled the bin bag itself out the front door, across two roads and down the street to stuff it into a bin where no one would ever find it and suspect what I had done.

That’s what an eating disorder does—it makes you crush every bit of your innocence and appetite and humanity and wanting and childhood into a bag and throw it out. It may tell you that there is a prize somewhere at the bottom for all your efforts, and I know well enough how convincing it can be, but if you recognize yourself in any of the story above, you must seek help. A fear food, and the focus that the fear requires, is a diminishment of your soul. It won’t stop at the cereal or the pasta or the chocolate bar—it is never just about that one fear. An eating disorder takes and takes until you are standing in your driveway with the remains of your mother’s groceries lying in a trampled bag at your feet and you do not even recognize who you are anymore.

Trust in the process of healing. If you are scared of confiding in loved ones that you have disordered thoughts about food, even if it is one food (note: it will not stay at just one for long), tell them anyway—no one can force you to start with that one particular fear. They will only help you until you are able to try the fear food again of your own free will. Ultimately, it is you who will have the power to reintroduce food into your life once you begin recovery, and the best thing about recovery is being grateful for the presence of things you once restricted.

Just a few months shy of a year into my recovery, I am working on making amends with my old friend cereal. I would be lying if I said it wasn’t still a challenge on some days, and the biggest hurdle is taking it off the shelf. But fear-foods get closer to loved snacks and treasured meals every time you find your courage and try them again.

I am here to acknowledge what my Eating Disorder would not let me admit: I like cereal. I like it when the milk turns chocolate or when you can add fruit on top. I like it when there’s nuts mixed in or honey baked in. And after restriction, recovery had given me the gift of rediscovering a childhood joy all over again. I hope it continues to sink in, just like a spoon in deep milk. I’m sure, this time, it will.

I wrote a film about hangovers and aliens - and it got made!