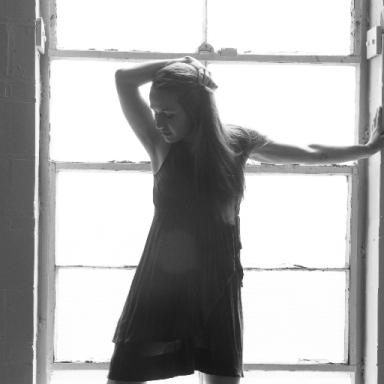 “You will. Trust me. We’re both going to be okay.”

Anna paused, looked up at the night sky, and sighed.

Caroline looked at the ground. The sun had set an hour ago, and a chill had moved in. Neither woman was dressed for it, for the sudden change in temperature. She had to smirk: what a perfect metaphor for their situation.

“These things just…happen,” Anna continued. Caroline couldn’t tell if Anna was talking to her or to the night.

“That’s been the theme, with us,” said Caroline.

“That was the theme,” Anna replied. Caroline couldn’t tell if she was agreeing or correcting.

Caroline shifted her eyes from the ground to Anna’s hand. She wanted nothing more than to hold that hand. Touch Anna’s skin. Feel the warmth radiating from her palm (“My little space heater,” Caroline used to say). Instead, Caroline shivered — Anna just a foot from her and yet a million miles away.

The world around them slowly moved into the silence between them. The children laughing and shouting, one crying out after his brother shoved him. The adults talking idly. The distant, muted melody of a radio, played through a tiny set of Bluetooth speakers on someone’s blanket on the ground. Caroline listened to the music, smiled, and remembered when the outdoors tunes would play from big, clunky CD players with 8 batteries in them.

“Remember when we’d watch the fireworks here, as kids?” Anna asked, breaking the silence. Caroline turned and wondered if Anna had been reading her mind. Or maybe she was just picking up on the energy of Caroline’s thoughts. Or maybe they both were picking up on the same, nostalgic wavelength. That had been the beauty between those two: like a soul inhabiting two bodies, they always seemed to sense the other, know when the other was thinking of them.

(Know when something was desperately wrong, when the connection was dying right in front of them, when they couldn’t get back onto each other’s wavelength.)

“One more Fourth of July, for old time’s sake,” Anna murmured, and this time Caroline knew those words weren’t for her. There was a kid trying to climb up the oak tree in the distance – and a mother running towards the tree, shouting. Almost directly in front of them sat a boy and a girl, maybe 16 (if that), their faces inches from the other’s, their hands on each other’s bodies, the adults pretending not to notice.

“I regret nothing, by the way,” Anna continued.

“Me neither,” said Caroline, her eyes still on the speakers.

“You’re still my best friend,” said Anna. “I don’t want that to change.”

“We’ll both find someone new,” Anne continued. “And they’ll be better fits for us, and we’ll be grateful that we ended when we did.”

In place of Caroline’s words was a gentle pop in the sky. The first firework had gone off. Just one: just enough to get people’s attention, to direct them back to their picnic blankets and lawn chairs, to remind them to look up. After a few seconds, a few more went off. And a few more.

“We’re going to be okay,” said Anna. Caroline turned and watched the light from the fireworks paint Anna’s face orange, then pink. Anna’s eyes dazzled, reflecting back the lights, but she seemed focused on something far past the fireworks. Or perhaps she wasn’t focusing at all.

Anna looked over and caught Caroline looking at her. Anna gave a small, weak smile, before pulling Caroline in. She wrapped her arm around Caroline’s shoulder and kissed her temple.

“We are going to be okay,” she said, one more time.

Caroline said nothing. She resisted resting her head on Anna’s shoulders, and instead wrapped a stiff, tentative arm around Anna’s waist. Caroline pressed her lips together and looked back up as the fireworks lit up the sky.

She smirked one more time. This beautiful display. Bright and dazzling. Each an individual surprise, despite their obvious inevitability. Destined to sparkle for a short amount of time, before fizzling into invisible particles of debris and hitting the ground.

Author of In the Event the Flower Girl Explodes. Have blog-will travel