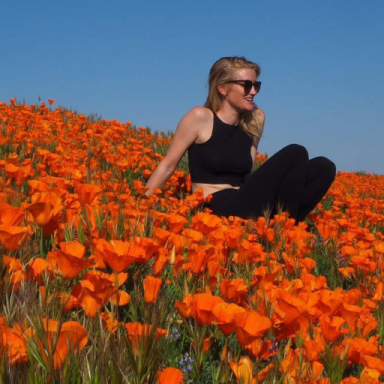 1. Life is just a series of the same experiences over and over.

When I first moved to DC after college, I was always jealous of the people who seemed so comfortable there, like they knew where they fit into the fabric of the city. Five years later, I was one of them — and then I moved to LA and started all over. I quickly realized I would always be the new one, the outcast or the lost soul one more time. I would always be asking the same questions, reasoning my way into answers and reconsidering a few weeks later. Each time, though, I would become more capable. The questions would feel just as disorienting, but I’d be a little more sure I can handle them — because I’d asked before.

2. My passions are my armor.

I started writing seriously when I moved home after college with no job, boyfriend or idea of what I wanted my future to look like. It was a way to work through my thoughts, build confidence in myself (knowing I could create something all my own) and take my mind off of stagnancy or failure in other areas. Since then, it has saved me over and over. For someone else, writing might be cooking, or taking long walks around the city, sewing sweaters for their dog or learning how to put on a perfect face of makeup. I just needed to cultivate something I could lean on when I needed reassurance that life was still good — that I still had the power to bring myself joy.

3. There are no certainties.

Our twenties are consumed with a sense of inertia. Personally, I felt thrust into adulthood, expected to have a firm set of beliefs, sense of self and concrete path forward — except that every day brought new information about myself and the world and it was almost impossible to know what to believe or how to act. To combat the inertia, I clung to the few things I was certain about with an almost frantic intensity. I would preach my “beliefs” like they were gospel until, eventually, I realized that certainty was fleeting — and fickle. There was always going to be new information or a different lens that would challenge my long-held assumptions, no matter how old I got. I had to learn to loosen my grip; to listen, recalibrate and pivot.

I used to think that if a relationship (romantic or platonic) endured a certain number of fights or incompatibilities, it was doomed — and the “healthiest” thing to do was to end it. I assume this thinking came from every TV show and movie ever, coupled with an Instagram feed of deliriously happy couples, families and friendships. The truth is that people are flawed, connections are nuanced and relationships heal and recover. Only you can decide what’s right and healthy for you, and that takes time, patience and a long-sought familiarity with yourself.

5. Embarrassment is for teenagers.

There is a very short list of professions, hobbies, outfits and ways of conducting yourself that are cool. Poetry is inherently uncool ,  and as a result, I was terrified to post my first poem anywhere public. But I quickly learned that trying to adhere to this list — or feeling embarrassed or ashamed for straying outside of it — would only lead me to a lukewarm life of restraint. I would never create anything valuable while adhering to someone else’s manual for life. I had to showcase my peculiarities and shout my passions into the void. Anyone who cared hadn’t found a way to peel off their own mask yet.

In our society, particularly as women, we’re taught to keep silent about the things we’re good at. When I would get a piece of writing published, I would post about it one time in one place — anything more than that felt too braggy. But then I found James Patterson’s Instagram (the highest paid author of all time) and realized he sold (and sells) books because he’s a self-marketing machine. By keeping quiet about my accomplishments, I was stifling my progress. In fact, I was suffocating it.

7. I don’t have to have lofty aspirations.

The Internet makes us feel that everything has to be taken to its highest level. If you like to write for fun, you have to write a book and want to. If you like to cook, you have to want to open a restaurant. But there’s something to be said for just liking something because you like it. Maybe dancing privately makes you happiest ,  and trying to bring that onstage would take away the simple joy in the act. You’re not lazy if you don’t want more.

Even the most hopeless, demoralizing situations don’t last forever. I’ve had to remind myself this through everything from bad moods to deaths in the family — and it’s always true eventually. There’s relief on the horizon, even if you can’t see it yet.

9. I should really just trust myself.

People give advice based on their own opinions and experiences ,  not yours. Not even your most trustworthy mentor or empathetic friend always knows what’s right for you. My most rewarding decisions have always come from fighting through the cloud of opinions and realizing, Wait, I want this. This is right. Let’s do it. It’s comforting to lean on others. But in the end, wouldn’t you want to give that Grammy’s speech or Harvard commencement address or New York Times interview knowing you made all the decisions to get yourself there? I would.

Writer based in LA.