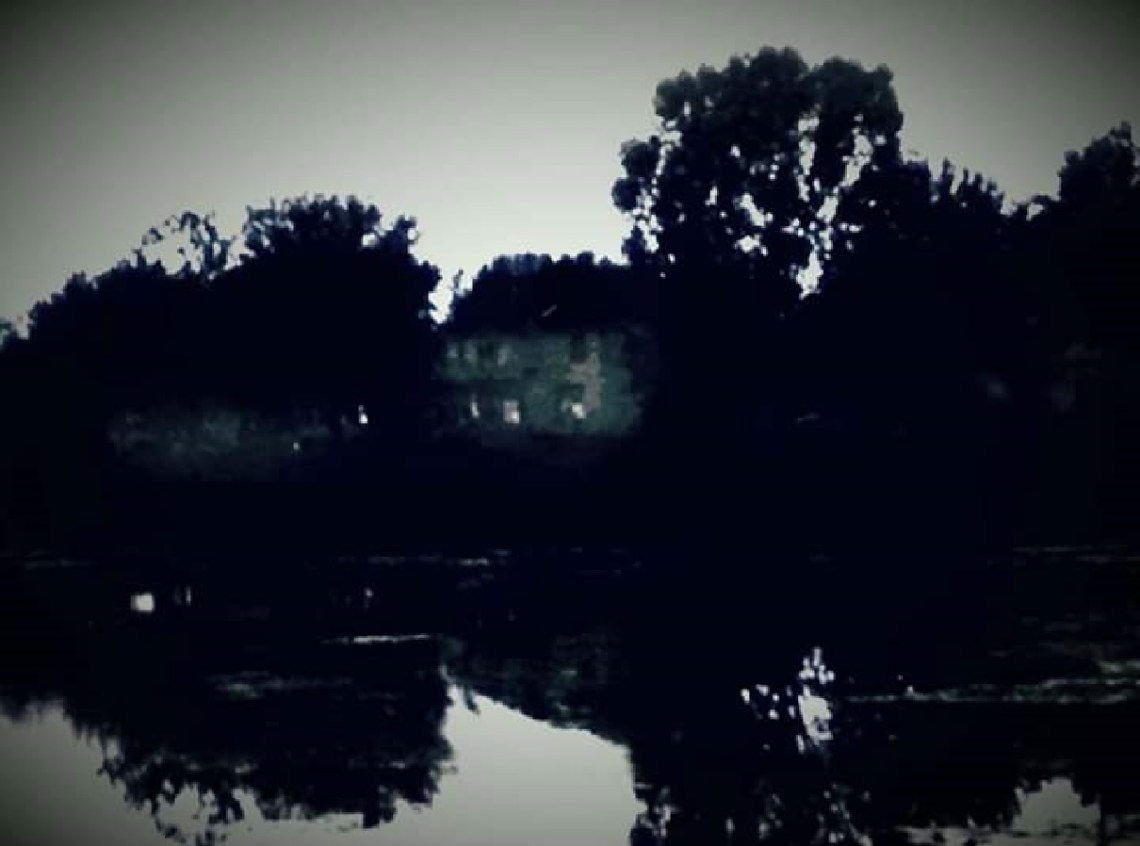 I should probably start off by saying that I’m not much of a writer. Besides school papers, which I mostly just get Bs and Cs on, I’m pretty useless with words. I’m only writing this for one reason, and that’s because I need to pass on everything I know about what happened to me and my friends. Of course, there are also lots of things I don’t know. Still, it’s better than nothing.

So yeah. Here’s what happened:

From the beginning, the day was off to a bad start. I woke up hearing a dull roar from the street, so loud it might as well have been right next to me. Even though I sprang out of bed in a second, I only just made it to the window in time to see the yellow ass-end of the school bus disappear around the corner.

No reply. She was probably still in the shower.

I grabbed my outfit for the day and used the downstairs bathroom instead, and did my morning routine in there. It only takes me like half an hour to straighten my hair, do my makeup, and get dressed – which is less than most of my friends.

When I was done, I opened the door and walked across the downstairs hallway.

“Mom,” I called up the stairs, even louder than before, “I missed the stupid bus! I’m just gonna walk.”

She must have heard me that time, because I heard the bathroom door swing open.

“No, sweetie, I’ll drive you,” she called from the upstairs hallway.

“No, baby, stay right there,” she cried – a little over-dramatic, I thought.

“Oh. My. God,” I sighed, listening to her rush and fumble around upstairs.

What the fuck, I muttered under my breath. I had already walked to school lots of times – usually with my friends, occasionally by myself. I only just started taking the bus because in 8th grade you get more homework and have to carry around more textbooks. Not only that, but I’d also just started wearing a bra, and the straps would leave painful red marks on my skin from the weight of the backpack. So, like it or not, I was stuck taking the bus most days.

Just not that day, it turned out. My mom’s feet came pounding down the stairs. She rushed into the kitchen where I was, grabbing her purse on the way.

“Really, mom?!” I whined. She was still in her bathrobe and slippers, and her hair wasn’t even dry. She’d just pulled it back into some sloppy knot between a ponytail and a bun, probably without looking in the mirror, otherwise she never would have left it like that. Her face looked raw and red without foundation on, and her eyebrows barely existed. I almost didn’t recognize her, not with the shadows underneath her tired eyes and the wrinkles I’d never seen before. She looked at least ten years older.

“Mom, why aren’t you wearing makeup?” I cried. Maybe it was rude of me, but there was something going on. Something didn’t feel right.

The thing about my mom is, she’s not exactly the ‘real-est’ person. She’d never go out without makeup, not even to the grocery store. It’s not that she’s a snob, or full of herself, or anything like that. She just thinks it’s important to look “presentable,” as she calls it – even if there’s no one around who’s worth looking presentable for. It’s like she thinks she owes it to the whole world, as a common courtesy or something.

I guess you could say the same habit has rubbed off on me. Ever since I was old enough (at least in her opinion) to wear makeup, I rarely left the house without my base foundation, cheeks highlighted, and my eyebrow game on point. (And no, not ‘on fleek’, no one even says that anymore.) And I never left without straightening my hair, unless I had track after school. Then I’d twist it into the tightest bun possible on the top of my head, and bobby-pin it in place.

Anyway, my mom was busy digging for her keys in her purse, so she wasn’t answering.

She looked up and glared at me. “Honey, I swear, don’t even start,” she said. “You are not setting two feet outside this house by yourself, not after what happened to your friends.” She finally grabbed the keys out, and they jingled like alarm bells.

Then, suddenly, I remembered.

Two weeks ago, my friend Jenna didn’t show up at track. At first I thought nothing of it, but then for the rest of the week she didn’t show up at school. Then, one day I overheard my mom talking to Jenna’s mom on the phone. At some point my mom’s voice went cold, and she took the phone into another room. When I saw her later around dinner time, she looked more terrified than I’d ever seen her before. Her eyes were wide open, and her face was almost frozen in shock.

When I asked her what was wrong, she said, “Nothing, sweetie. Jenna just hurt her leg. She’s going to be fine.”

Even then, I knew she was lying.

Then, this week, my friend Ashleigh wasn’t at school either. I tried texting her, but the text I got back said:

I guess that was my answer.

So, fast forward to that morning, when my mom mentioned my friends, a huge red flag went up. She was hiding something.

“Okay then,” I asked, “what, exactly, is going on with Ashleigh and Jenna? Because so far you haven’t told me anything!”

My mom got that look again, like she’d lost all the feeling in her face.

“Don’t worry about that,” she said quickly.

I sighed. “Okay, then. Are you taking me to school or not?”

She pulled on her spring coat over her bath robe, and switched out her slippers for her flip-flops by the door. I opened the garage door and followed her out.

Then we began a very silent, very awkward drive from one side of the subdivision to another. And yeah, it took a few minutes, because that thing is huge.

Basically, it begins at a fancy-looking sign that says Meadow Creek, right on the border of the suburban sprawl and all the millionaire horse ranches to the west. The whole area is rows and rows of almost identical upscale houses, which ends at the middle school on the edge of the woods on the south end. But on the west end you always see driving past, there’s this nature preserve area called Dowlin Marsh.

I think it’s supposed to be a wildlife conservation kind of thing, except I’ve never seen any actual wildlife anywhere near that place. It’s just a flat, grass-filled bog that stretches for miles and miles, with only a few scraggly trees even birds won’t build their nests in. I’ve always thought it was kind of an eyesore, especially on a cloudy day like today. Maybe people just pretended it was part of the natural beauty or whatever so they wouldn’t regret spending over $600k to live next to a giant mud puddle.

Anyway, it would have been a two-minute drive, but it took more like ten minutes because traffic was so backed up from everybody dropping their kids off. Eventually, we made it to the front entrance, and it was my turn to get out. I said good-bye to my mom and got out, slung my backpack over my shoulder, and walked to the front entrance.

Nothing remarkable happened at school that day, not that anything ever did. I caught the bus home and watched TV until my mom got back from work. It was a Friday, so my mom wouldn’t make me do my homework until Sunday. Instead, she heated up a frozen pizza and we got caught up on all our DVR’ed shows that we’d missed during the week.

As usual, I was texting my friends the whole time, at least the ones who hadn’t mysteriously disappeared. Brittany asked if I wanted to chill that night, but when I asked my mom, the answer was obviously no. I didn’t bother arguing, since she was already tired from work, and I didn’t want to piss her off. So, I had to settle for painting my nails instead.

“Why are you painting them black?” asked my mom. Like it even mattered.

“Not just black,” I told her. “Pink and black.” I was just about to paint every other toe bubble-gum pink so they’d look kind of like piano keys.

“Yeah, but why do you have to use black though?”

I shrugged. “I don’t know, I think it’s pretty.” I mean, what, did she think I was worshipping Satan or something?

Actually, I’d never realized how cute that color pairing looked until Brittany got a black-and-pink plaid coat for fall. I tried it on once, but I just couldn’t rock it the way Brittany did.

I finished the black ones and started with the pink. “The pink one’s even glow-in-the-dark,” I told her.

My mom ended up going to bed shortly afterward. She let me stay up as late as I wanted though, since there was obviously no school tomorrow, and because I’m almost fourteen years old. I even thought about sneaking out and walking a few blocks over to Brittany’s house, but then decided against it. Brittany’s mom would probably just tell my mom, and I’d get in trouble anyway.

At least someday, I thought, I’d have my driver’s license and be slightly more in charge of my own life. But right now it seems like that day will never come.

So yeah, as if I wasn’t lame enough, I ended up passing out around midnight.

The next thing I knew, before I even opened my eyes, something was wrong.

It was morning. The TV had switched itself off. My nail polish bottles were sitting untouched on the coffee table. And the second I felt the pain, I screamed like I was on fire. It was coming from my legs.

I wished I was having a nightmare. My right leg was fine, totally normal. But on the left…

All the skin below my knee was gone, and so was the muscle. Only my bones were left, but they weren’t picked clean. They were covered in blood, and dripping in thick, whitish goo. Even though it was a black leather couch, I could tell from the way it shined that there was blood all over it. My blood. The tears blurred my eyes, and I kept screaming.

My mind disconnected at this point. My mom heard me, came rushing down the stairs. She screamed too, and called 9-1-1. An ambulance came, and all I did was stare at the ceiling while the EMTs did their thing and put me on a stretcher. The whole time, it looked like it was happening to someone else. To me, only the pain was real.

And as I was being carried outside to the ambulance, it hit me. Was this what my mom had been afraid of that whole time?

At some point, I blacked out and lost consciousness. I didn’t wake up until I was in a hospital bed, surrounded by nurses and all kinds of scary E.R. machines. At some point, they pulled a curtain across the bed so I couldn’t see my legs.

They’d already given me something to numb the area, but I could still feel something scraping against my bones. There was a sound like a buzz saw, and a horrible burning smell. Were they cutting my leg off? Someone put the anesthesia mask on my face, and I blacked out again.